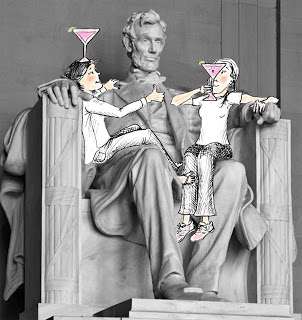 Do what you are doing, even if what you’re doing is drinking. Barbara and I recently discovered, separately and then together, that having a cosmo while we’re doing anything else but having a cosmo is a waste of gin. To have one while preparing dinner for a crowd is to drink it in distracted sips until, before you know it, the drink is gone, and you didn’t even enjoy it.

I bet Abraham Lincoln would have practiced mindful drinking, if he drank. And the reason I mention it is because Barbara asked me to write something about Abraham Lincoln so she could do an illustration of him. From what I’ve read, Lincoln was a teetotaler, and in fact spoke against it at a Washington Temperance Society gathering early in his career. But that did not stop him from saying, when informed that General Grant drank whiskey while leading his troops, “Find out the name of the brand so I can give it to my other generals.” He also said, according to a magnet I saw in a bookstore, “It has been my experience that folks who have no vices have very few virtues.” Which is why when Barbara and I get together on his birthday to have a quiet cosmo in his honor, I’ll know he’d have approved.