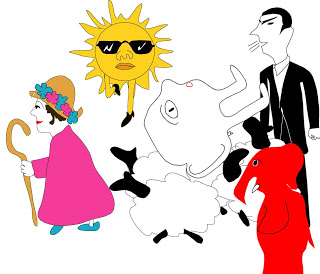 I have been asked recently to create a series of illustrations to accompany Pierre and the shy band at their gig in the 12 bar on Denmark street tomorrow night. At firstI thought of making a very basic installation that could be put onto the stage as free standing objects around the band, but due to the short time the band were going to be on for decided against it. Instead I have created a number of characters from the songs, which will be projected as a short animation behind the band during the performance. I have not used anything really that out of the ordinary just a combination of Adobe Illustrator and Power point. If you are in the area come and have a look!