Last spring, I was approached by Barnes and Noble about creating a full front facade window mural for their Tribeca, New York store. The store facade consists of floor to ceiling windows divided into six sections. The storefront look was a little tired and they wanted to upgrade by installing a site specific mural.

The goal was to spice up the facade, make it more inviting and give a little flavor of what Barnes & Noble has to offer. Having never done a project that was specifically intended to be enlarged to building size, I was excited to tackle something this big.

We went through an initial round of sketches where the focus was to be primarily about what the store offered by way of services and ambiance on the inside. One of the main criteria was to feature the Cafe’ cup, so I created a concept that included it prominently. The steam swirling above the cup would fall behind the store logo to add interest in an otherwise empty space.

Here is what the first concept sketch looked like with individuals browsing books and a group of kids enjoying a story time. They also wanted to give the impression that gifts other than books were a big part of the store vibe, so we went with some swirling Lego blocks and a gift card along with the books. I sent the sketch off and as sometimes happens, the concept was killed. After seeing what was requested, the client decided that they would scrap this approach and brainstorm something else and get back to me. Of course that’s always disappointing, but I was paid a sketch fee and moved on to other projects.

A few months went by and then I got word that the Tribeca mural project was back on with a revised direction. This time, rather than focus on the inside of the store, they determined that the focus should be on the the Tribeca neighborhood and include a couple of landmarks that would be recognizable to everyone, namely the Woolworth Building and the Franklin Street subway entrance. The carryover from the first concept was the cafe’ cup with it’s swirling steam, which the client loved. I also needed to include a space that would be cut out to allow the events poster to be changed out every week as well as the hours of operation. I though it would be fun to have these areas as pages of a book.

I set out to revise the sketch and try to capture a bit of the eclectic feel of the neighborhood and New York in general. I wanted something very NYC and after some discussion, we decided there was nothing that said New York more than a yellow taxi cab. Here’s the rough sketch as it was approved and the final drawing that I used to create my Photoshop painting.

I wanted a warm palette with nice contrasts of blue and lavender in the shadows and I think I achieved a nice color balance. I particularly like the angle of light coming from the late afternoon sun filtering through the clouds. Below is a later stage progression as I moved from underpainting to final details ( I forgot to save out earlier stages). The most evident areas of change were to the left side of the painting where you can see the purple undertones. 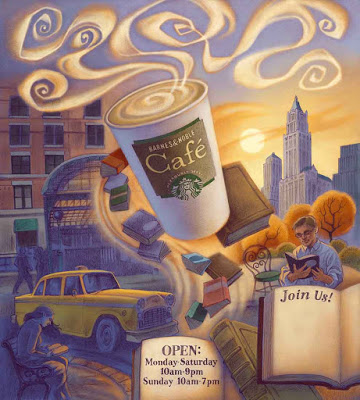 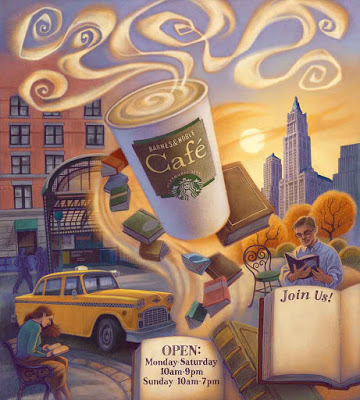 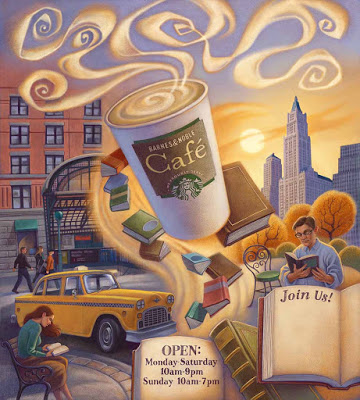 The scale was big for this project. It was determined that the art needed to be somewhere around 100 pixels per square inch on the full size reproduction, so I worked on a file that stretched the RAM capacity of my machine the final file was over 700 MB. I tried to merge layers as much as possible during the process in order to keep the file size down but even so, the finished file was the biggest I have ever dealt with. The upload alone to about three hours thanks to my less than lightning fast upload speeds.

Here is a digital mock up of the store facade with the painting in place. Barnes & Noble is currently working on installation of the full size vinyl reproduction and I will post an update when I get pictures of it. It’s kind of fun to know that thousands of people will enjoy my art on the streets of New York in the coming months and years.