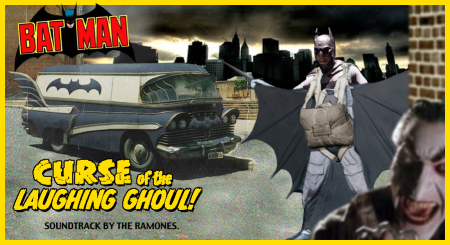 This is the kind of thing I do sometimes when I’m bored to … you know, entertain myself.   I’m a huge Batman fan, since the sixth grade.   Strangely enough I’ve never cared much for the Batman movies, except maybe the one with Keith Ledger as the Joker.  That was pretty good.     What I don’t care for is the rubber suits, or even the body armored look of the last three Batman movies.  And the Batmobiles are trying to be way too cool.    So I’ve photoshopped together a still from a Batman movie I would like to see.   I like the klunkiness of it.  Klunk is cool!

Someone actually built this car and I grabbed it from the internet.   The Joker is the Joker from the “Dead End ” short by Sandy Collora on Youtube.  Which is by far the best live action Batman film.    I also think a Batman movie with a soundtrack by the Ramones would be kinda neat.    In my mind this “movie” was shot in perhaps East Germany in the mid seventies and never got play here in the states.   Here’s the link to BATMAN: DEAD END.