We are beyond excited to introduce one of our newest Directory of Illustration artists, Adhemas Batista.

Adhemas is a self-taught, Brazilian-born graphic designer and illustrator based in Los Angeles. Since age 15, he has been developing a distinctive, colorful style that has earned him international recognition and is resonating with some of the world’s biggest brands, including Absolut Vodka, Adidas, Coca-Cola, Cadbury Chocolates, FIAT, Havaianas, Hyundai, Mercedes Benz, Microsoft, Nestlé, Nike, Nissan, PepsiCo, Proctor&Gamble, Puma, Purina, Sony, Toyota, Unilever… and the list goes on.

We caught up with him last week in between L.A. and Rio. Here’s  a glimpse into the vibrant and colorful mind of Adhemas Batista.

See more of Adhemas’ work at www.adhemas.com.  We’re sure you’ll agree that his trademark I’M SELLING COLORS® says it all.

1. You taught yourself graphic design and web programming as a teenager. How and when did you come to develop such a distinctive design and illustration style?

When I started my career the interactive industry was just emerging everywhere in the world. Back in 1996 the internet was something not many had heard about and developing was such a question mark. If you wanted to become a professional web designer you had to learn both design and coding. I taught myself the software and techniques. I was eager to learn the right tools and find out more about this profession. But I loved making drawings inspired by comics and Japanese animé since I was a kid. So, naturally I favored design against coding.  For a while I was just following trends, proven styles and best practices. Then I had the chance to work on a project for Havaianas Sandals in 2004 and decided to explore my illustrative skills and style more. Because all of Havaianas’ communication is very colorful and bright, it was the perfect lab to give birth to my artistic design style and illustrations. I have been working on projects that need big doses of vibrancy and color ever since…

2. You’ve worked with many of the biggest brands in the world — from Coca-Cola to Microsoft to Mercedes-Benz. That type of client list is not developed overnight, yet you are only 33 years old. What road did you take to establish yourself as an artist that such powerhouse companies could trust with their brands?

I think to my advantage is the fact that I started working when I was very young, at age 15.  So today I already have 18 years of background and I have seen and worked with all sorts of companies and people from all around the world. This type of trust and experience is only developed with time and patience. You are right that it doesn’t come overnight. Understanding all the shortcuts, the cultures and language spoken on a day-to-day basis with large clients does make it easier to work with other brands. But I also believe that every new project has its own challenges and what makes my clients trust me is my dedication, as well as my understanding of the processes. 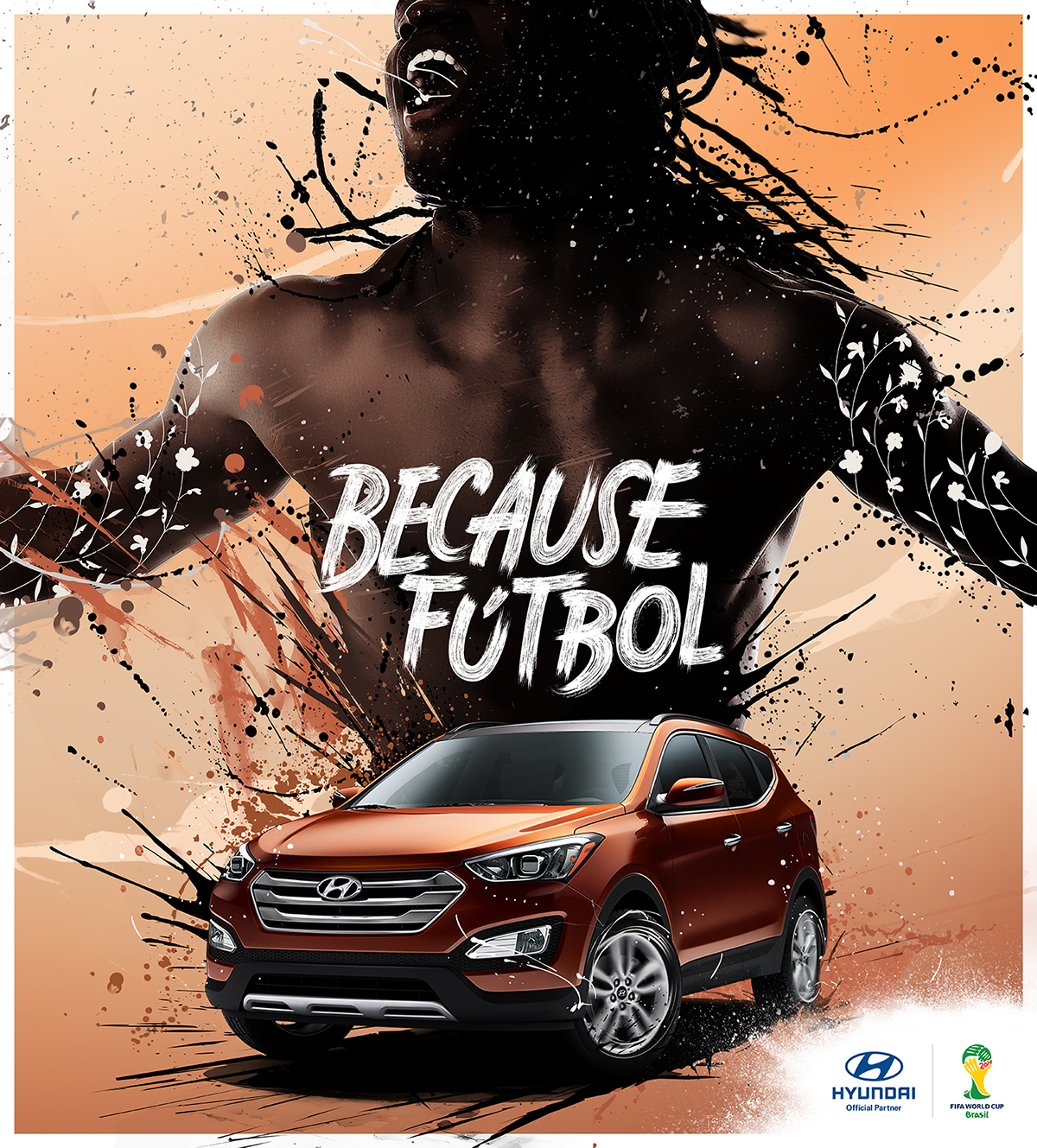 Adhemas’ Brazilian native roots and culture knowledge were a great advantage on this project, which included a wide variety of concepts, visuals for print ads, lettering for the lock-up of the whole campaign and illustration content for the tumblr page.

3. What are some of the primary differences in working for Fortune 500 companies versus working for small companies?

There are many differences beyond budgets. Most people believe the bigger the company, the better the money gets. That is not at always true. Sometimes small companies also have good budgets and are excellent to work with. I believe most big brands are just more prepared to work with independent contractors and they understand more about the process and legal implications with creative copyrights, etc. Because they are used to working with photographers, musicians, illustrators ,etc., more often they are more respectful of the professional and the process. Some small companies do try to get the most out of their budgets and sometimes they cross some limits professionally. Then you find yourself teaching more than collaborating.

4. Tell us about some of your favorite projects. What has made them special?

Usually my favorite projects are the ones I feel confident using in my portfolio and the ones that will bring more exposure to my work. The Havaianas project has a special place in my heart because it opened my range of creativity and a new market for me that I previously didn’t know existed. Many projects that shaped who I am today came after the Havaianas project. There are also special mentions, like the Coca-Cola Remix project, which brought me great attention, and last year’s Gatorade Benefit project which is helping to set a new direction for my work–bringing more work in the same vein and keeping me fresh. 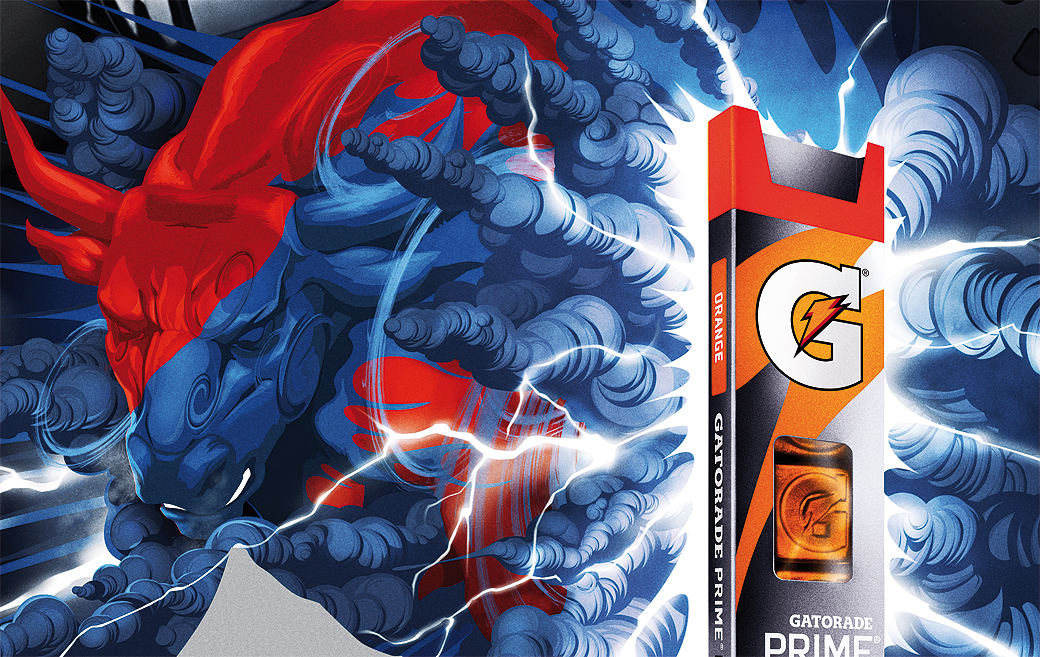 Gatorade partnered with artists from around the world to create a dynamic print campaign highlighting star athletes from baseball, football, and tennis and Athleticism. The campaign featured illustrations of the athletes demonstrating the benefits of Gatorade products under the tagline ‘Win From Within.’ Adhemas was initially asked to illustrate a combination of three ads for the campaign including the artwork for Cam Newton, Derek Jeter and Usain Bolt. The visual direction was so well-received by PepsiCo that they invited him to do a fourth ad for JJ Watt, as well as participate in a short MTV interview segment.

5. The demands of a food brand must differ from a software brand. How do you approach different creative communication needs?

They do have different needs and requests. Usually food brands need to be pickier about what the customer is seeing… making sure a strawberry is a strawberry and not something else. They tend to be less abstract and easier to understand visually. Customers don’t want to buy food without knowing what is in it. Their concerns all make sense to me. Software brands, or even some other segments, make it possible to go a bit more abstract I guess, exploring different themes to associate with the brand and using metaphors more openly. 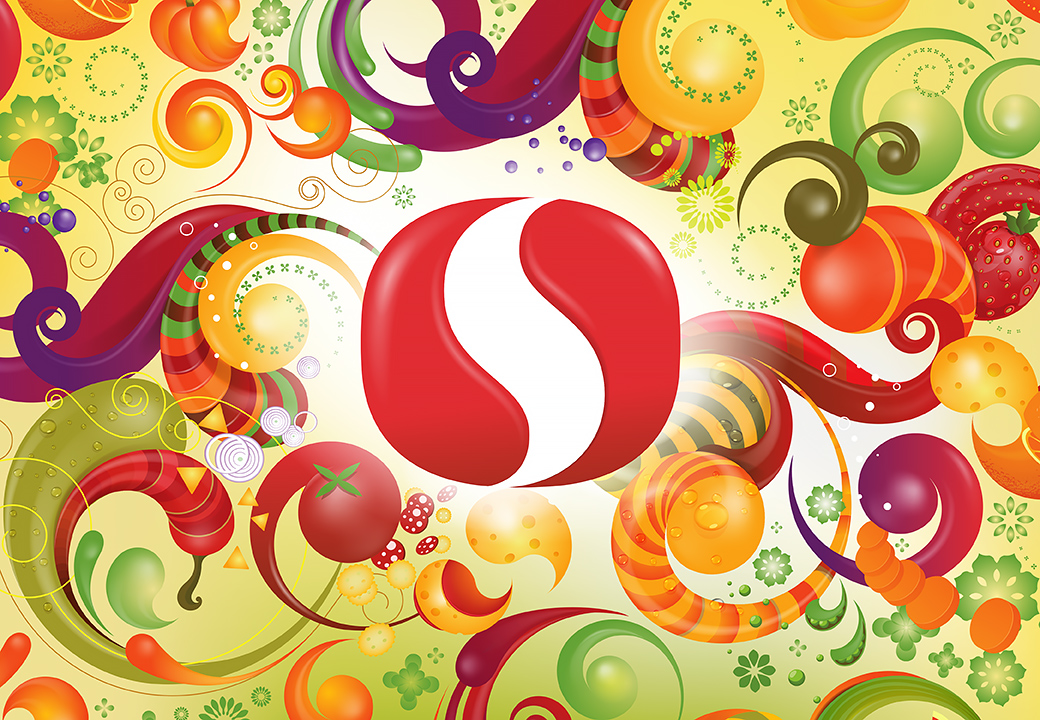 Safeway wanted an attention-grabbing illustration for a mobile food truck, which would be used at special events and promotions at their chain of supermarkets, including Vons and Pavilions. The truck’s design was to be inspired by the everyday groceries American households buy. Adhemas took that direction, combined his swirly style with a warm colorful palette of food colors, and used a playful approach to create a unique design for the vehicle.

6.  You moved to the U.S. in 2006. What prompted the move, and how did you make the transition (both professionally and personally)?

I came to the U.S. with a job proposal. Actually I had 6 opportunities including NY, SF and LA.  What helped me make my mind up was the idea of being able to learn English and  live in a sunny city like Los Angeles. Plus, it was the best choice for my family. My first job in America was at Hello Design working with interactive projects. After a year and a half I became self-employed and started working independently. I think the biggest differences were organizational– different schedules and time frames. My most complicated barrier was the language, of course… both cultural and spoken. I think nowadays most countries have the same style of work, with a few cultural changes and differences in budgets. But usually from briefing to closing a project I haven’t felt that many differences working for the U.S., Brazil or any other country so far. The language spoken within the industry is very similar everywhere.

7. How has your Brazilian background helped you in the United States market, and how has it challenged you?

When I came to the U.S.  I was already a recognized professional in the interactive market with awards from the most important festivals despite my age, so it was easy for me to blend in and gain confidence. Everybody was very welcoming and supportive with me and this helped me stay and build a career here. My cultural experience in Brazil and my visual style brought, in many cases, a new view to the projects I was involved with and I usually brought a more colorful and energetic possibility to the table. I think the challenging part was making my work desirable while maintaining my roots and style. 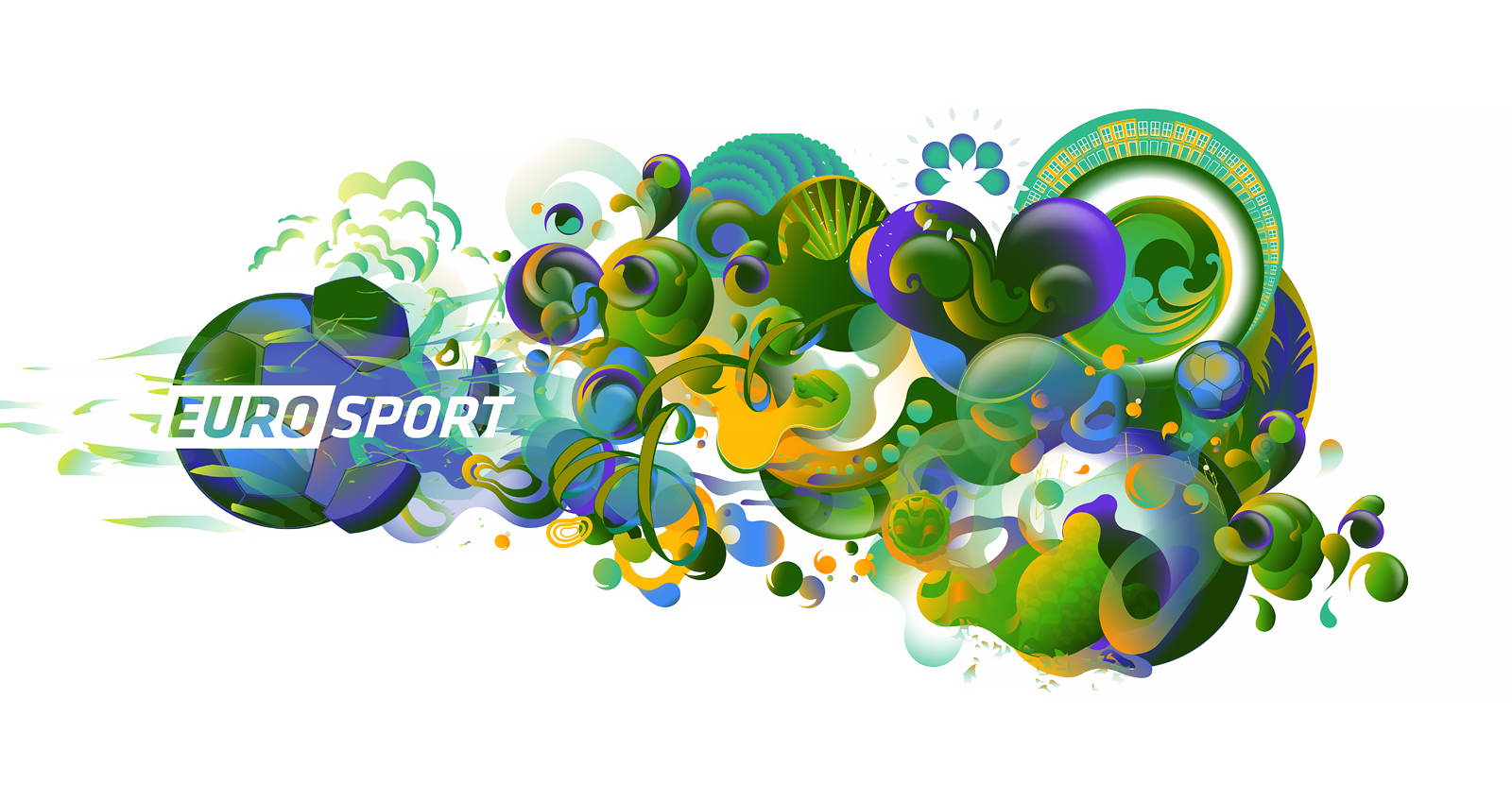 Commissioned by Eurosport in Paris. Concept and illustration of a key-visual for the special coverage of the World Cup 2014. The image was adapted for many different formats and used on all Eurosport digital channels in Europe.

8. Do you and your family still have the opportunity to spend time in Brazil? How has all the recent media focus on Brazilian political and social concerns impacted you and your work?

We try to visit as much as possible and we are always watching, reading and navigating Brazilian media channels. We like to keep ourselves involved with our homeland mostly because all of our family lives there. I believe the recent events that have been occurring in Brazil since last year, manifestations, World Cup etc. are making a positive impact on the country and it moves me with hope that Brazil is evolving and people are beginning to understand its potential. Even with disagreements in social politics it all means there is a good awakening going on and that is good for the future. The impact was also great on my work because I had the chance to collaborate on projects for the World Cup with the advantage of knowing both cultures (American and Brazilian) and speaking both languages.

9. You have worked for several brands on World Cup specific ads. Tell us about some of these recent projects.

I have been working/collaborating with TBWA\Chiat\Day for Adidas since 2012 for the World Cup in many different stages, working on concept pitches and now on a reactive campaign for the grand finale on the 13th of July. I helped Innocean set the visual direction for the Hyundai World Cup campaign in the USA and Mexico with print advertisements, lettering and illustrations.  I also made the key visual advertising for a limited edition of Palmolive Shampoo for the World Cup and also the key visual for Eurosport from France to use on their special coverage of the tournament.

The concept is based on the colorful ribbon bracelets Brazilians wear for luck.

10. Do you have any World Cup predictions?

As a Brazilian optimist I think Brazil will win this World Cup against Argentina.

11. The 2016 Rio Olympics seem tailor made to showcase your talents. Are you excited about the games, and the opportunities they might open up for you?

Yes,  I think the success of the World Cup that has already been noticed so far will help me a lot. I am hoping I can get even more involved with the Olympic Games because the variety of sports will get more brands involved with the event and it will open up more chances for me to participate. 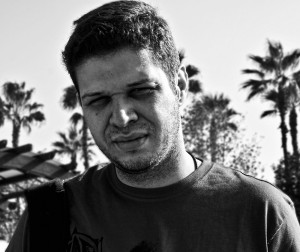 Many colors to your life,

A – B
By Iral @ Directory of Illustration|July 1st, 2014|Featured Content|