Skip to content
Previous Next
I have recently been commissioned to produce a children’s book for a client. I have now completed the book, and it has been received and accepted by my client. The book is 32 pages at 10×10″. 21 illustrations. and a book cover. I thought I would share my process in completing the book, and so here goes. Firstly, I was contacted by my client who had found me via one of my advertising/ marketing profiles. He advised me on what he envisaged for the style of illustrations and we discussed the graphic design format. The fee for my work was agreed, along with the timescale for production. I then supplied my contract, which once signed, enabled a beginning of the work. The main body of the story involved three characters, two male and one female The story was entitled Stan the cave man invents fire. My client sent me his manuscript , and after much deliberation, we arrived at a general format for the illustrations. My client then sent me some images he had found on the web, as to the style he wanted for the illustrations. After agreement, I then produced a rough visual/story board of the whole book showing my initial ideas as to where I thought the images and text should be placed. This was only a guide, as elements would alter as the work progressed. 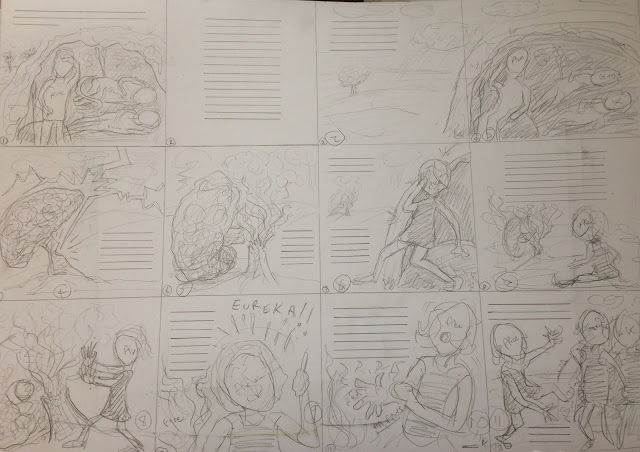 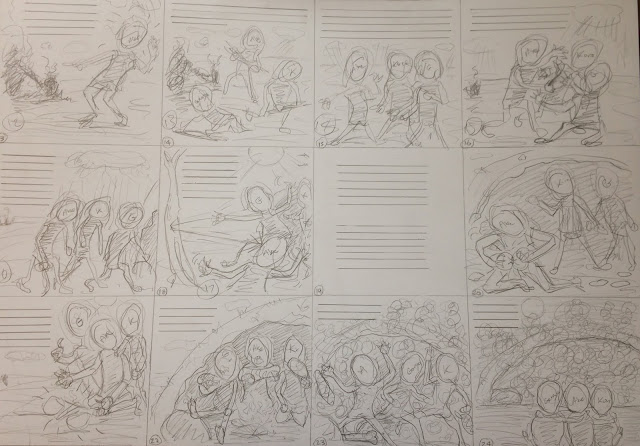 When the storyboard was accepted I then began to collate character designs, I produced three sheets of A3  drawings of heads only, I repeated this until all three characters were chosen. an example of one of the pages is below: 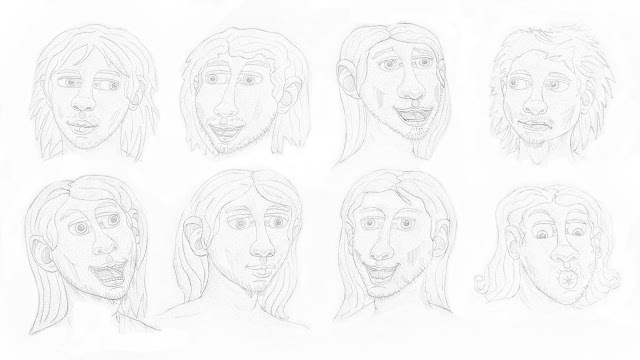 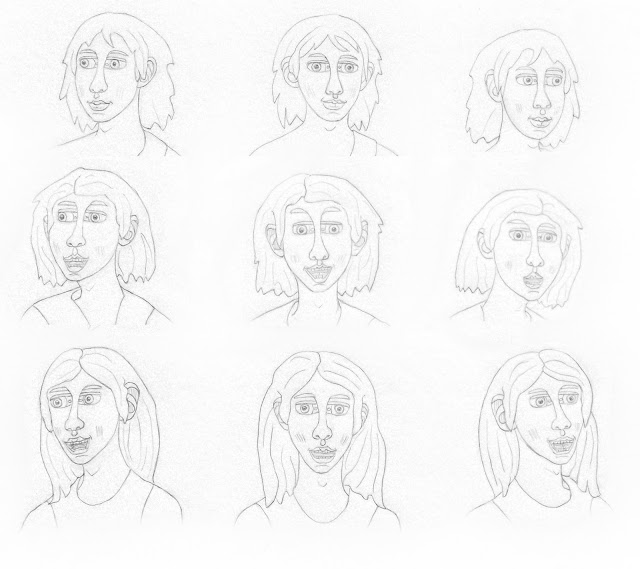 Once the characters had been finalised, it was time to produce one of the illustrations as a line drawing showing the agreed character attributes. I produced the first illustration in the story to exhibit this. I also gave some indication as to where the text of the story would be positioned. 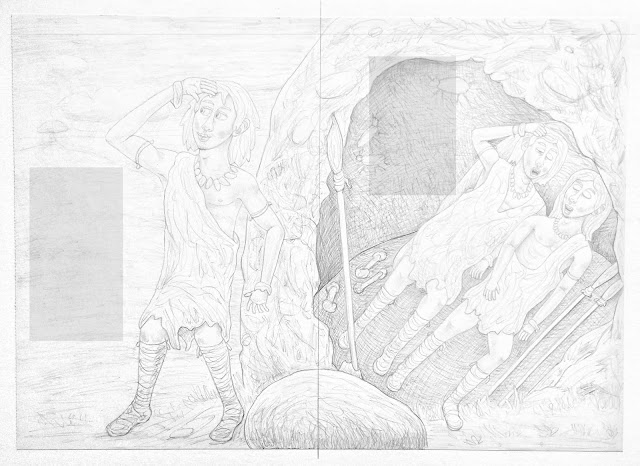 After the style and element design was agreed, I then began to add colour to enable an insight into how I would render the work. ( the chosen image was a double page spread form the book.) 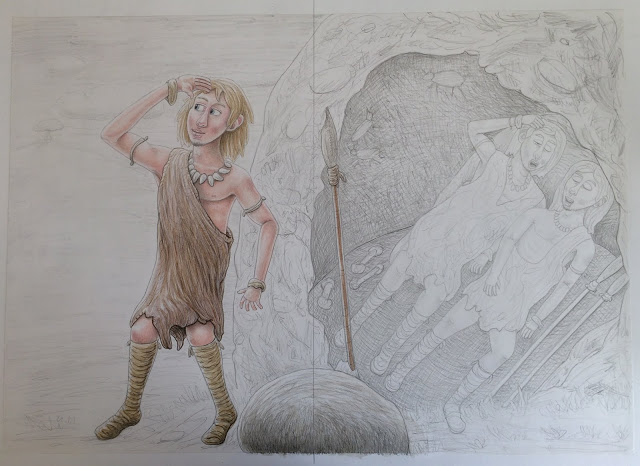 After an agreement was made regarding the style and content of the characters, along with the environment, I then completed  the whole illustration. Once this stage was agreed, this system was then employed for each of the illustrations in turn. Below are all of the interior  illustrations for the book. they are in page order. I cannot show the interior text or design at the present time as per copyright terms.(I can show the cover) However the story will become apparent in the near future when the work is published, and I supply a link. All the illustrations below began life as the examples shown above, my style is roughly 70% traditional illustration methods (drawing, coloured pencil, and watercolour/acrylic) the remaining 30% is by digital means. The digital process, involves around 15% actual digital paint, and 15% dynamics, of environment and colouration. I will produce a separate blog post for this stage in the near future. 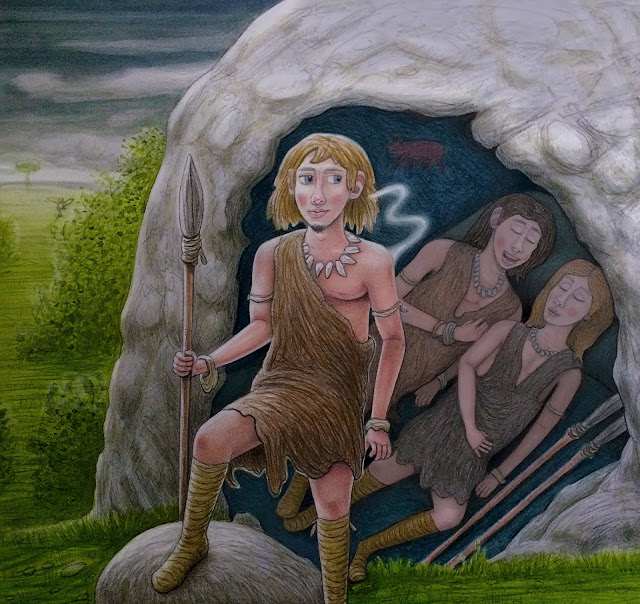 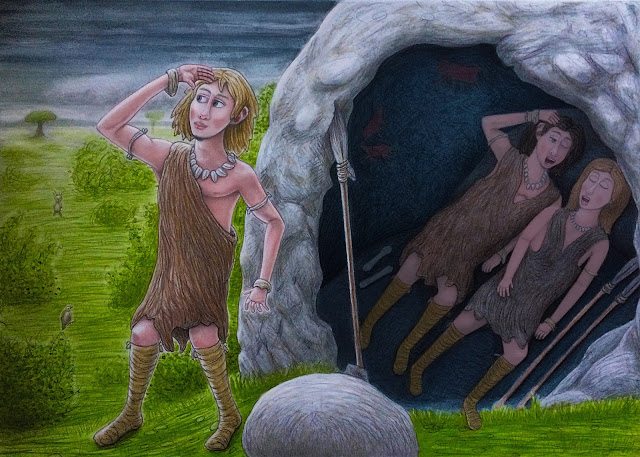 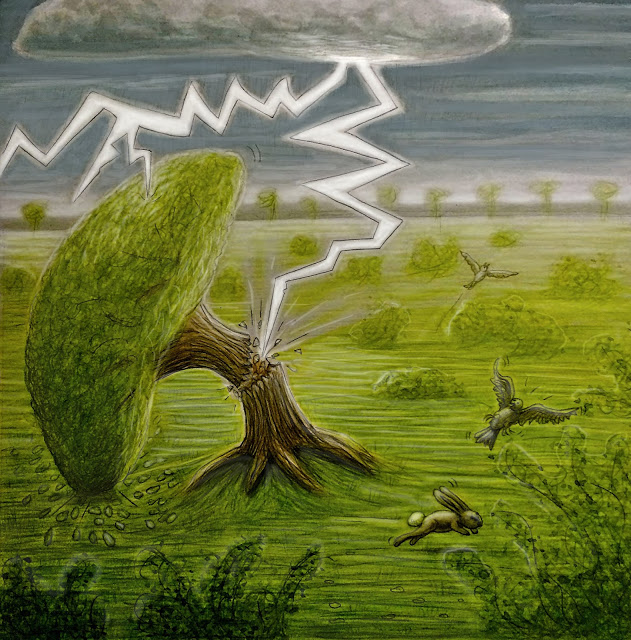 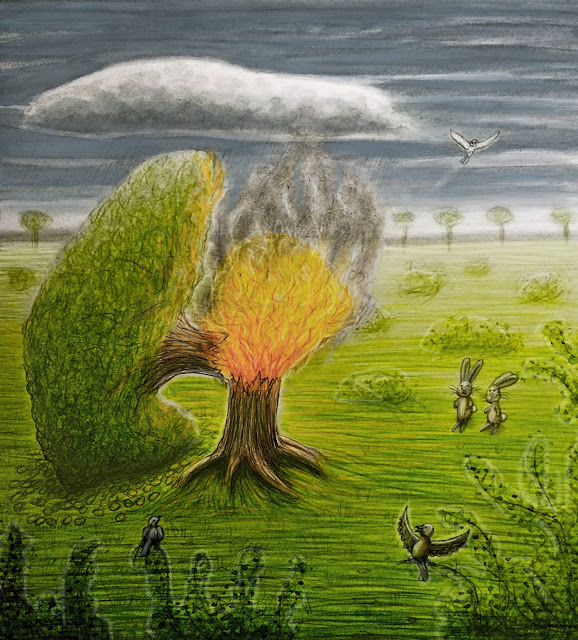 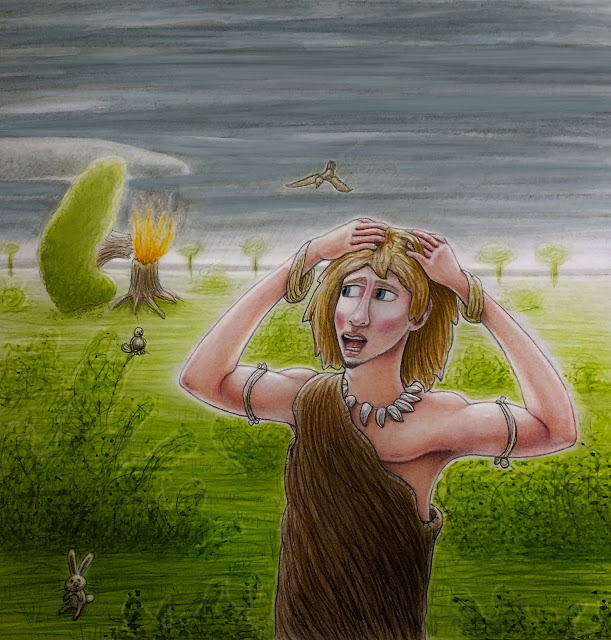 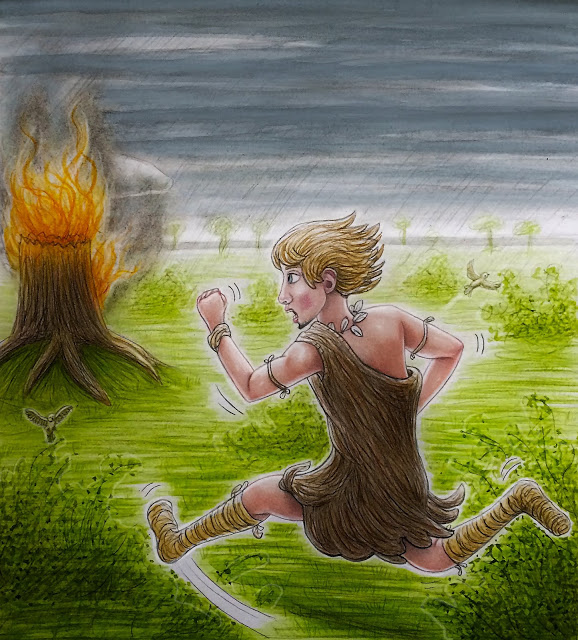 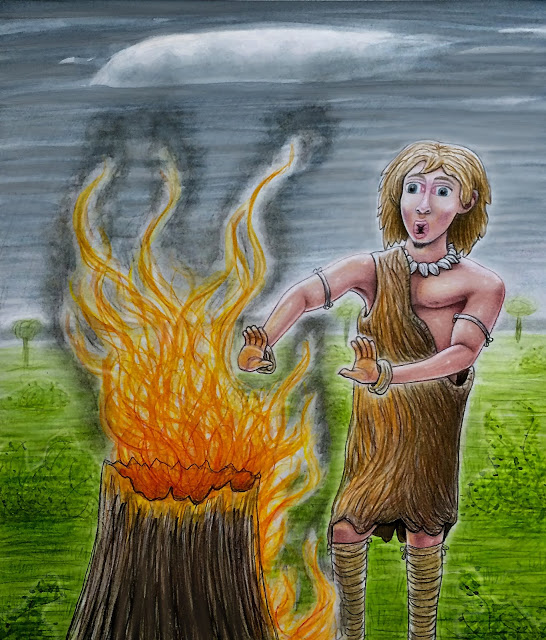 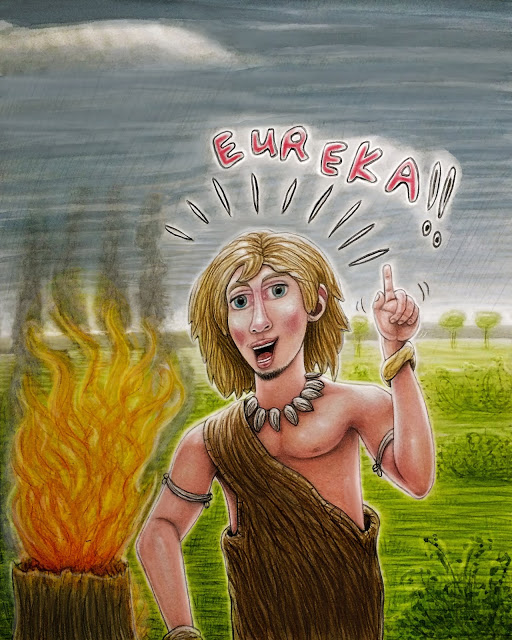 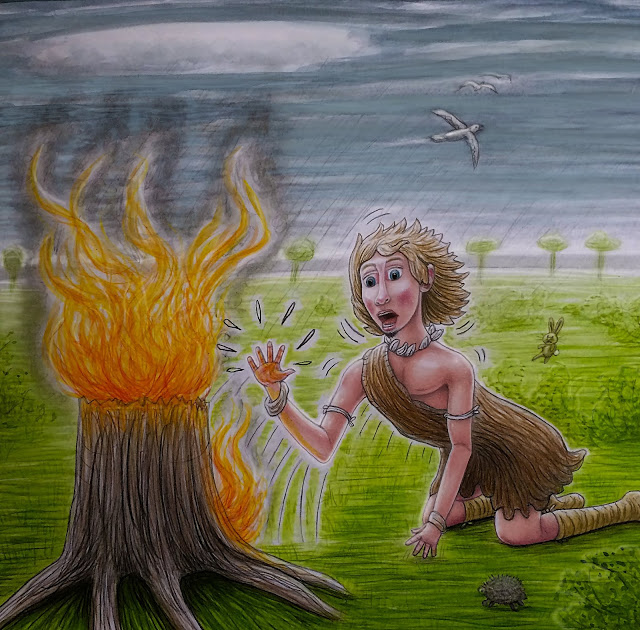 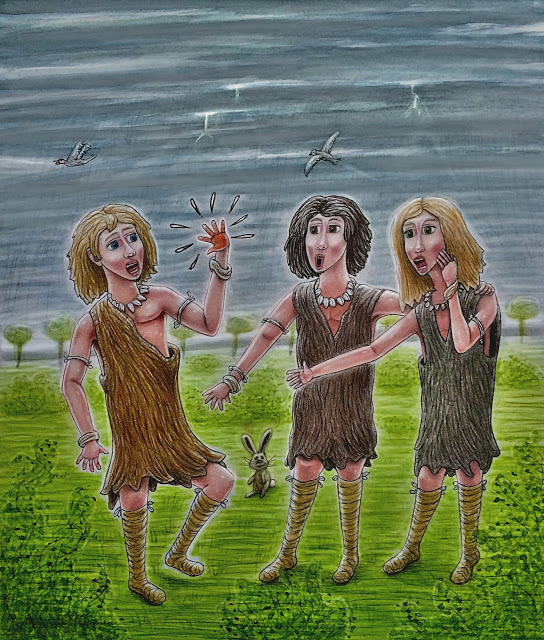 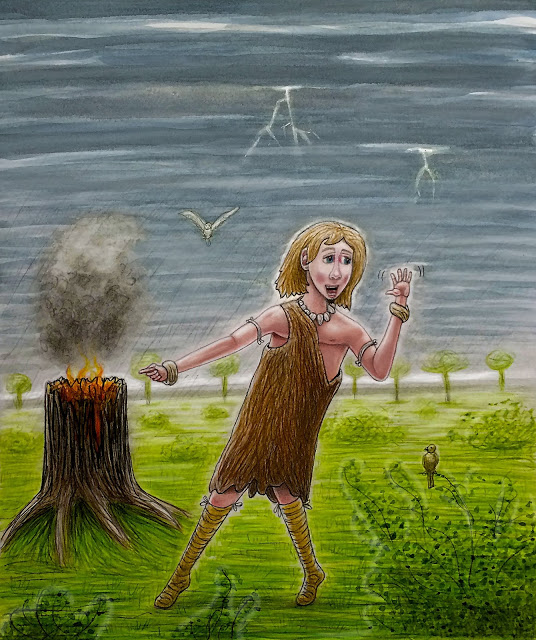 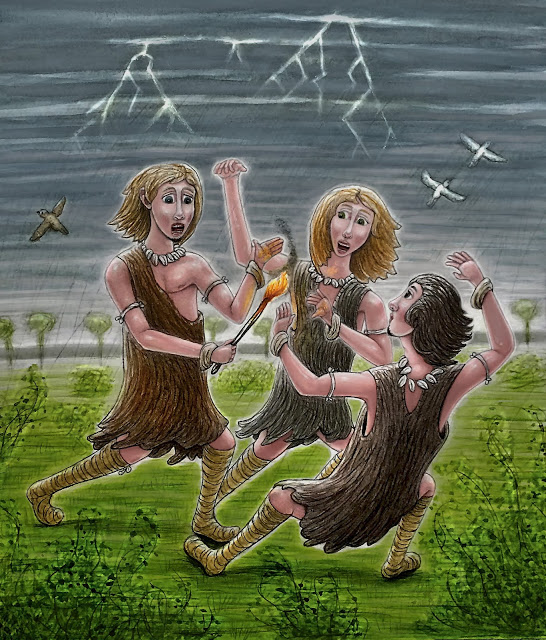 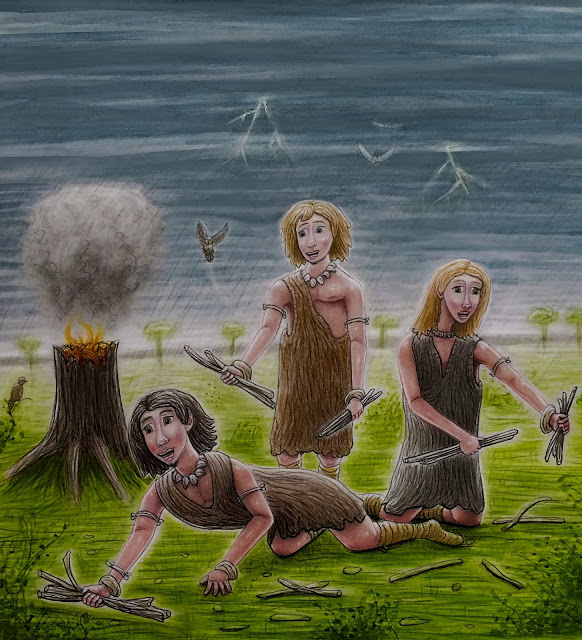 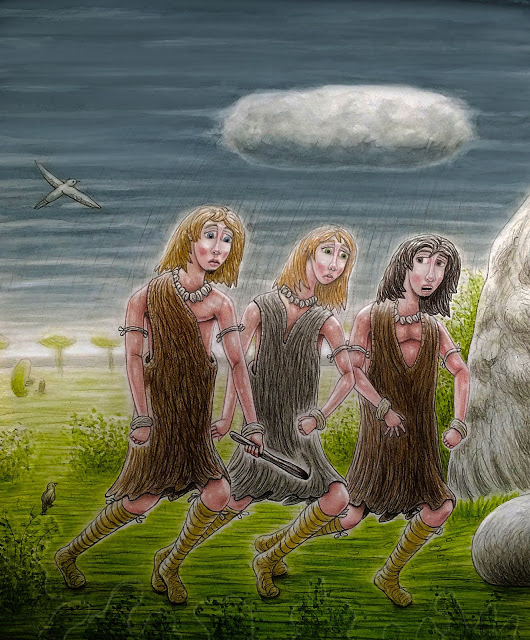 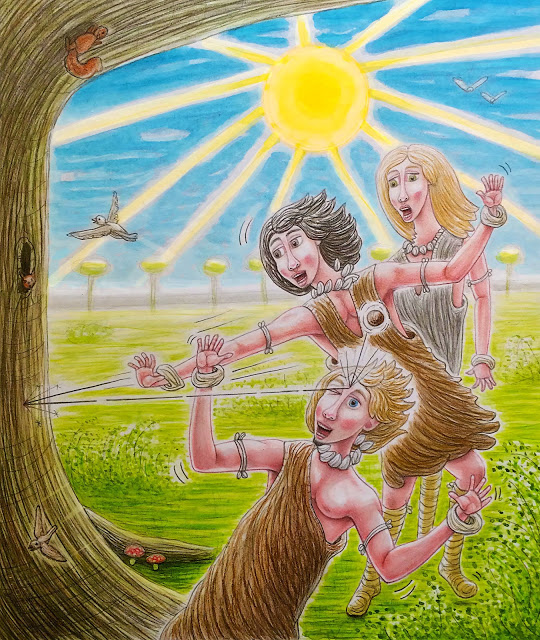 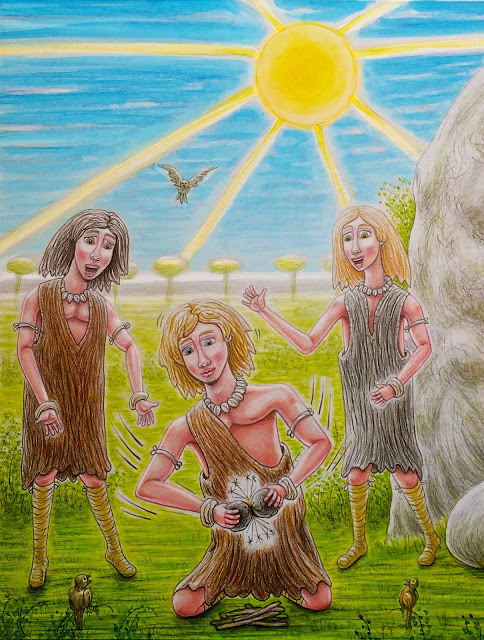 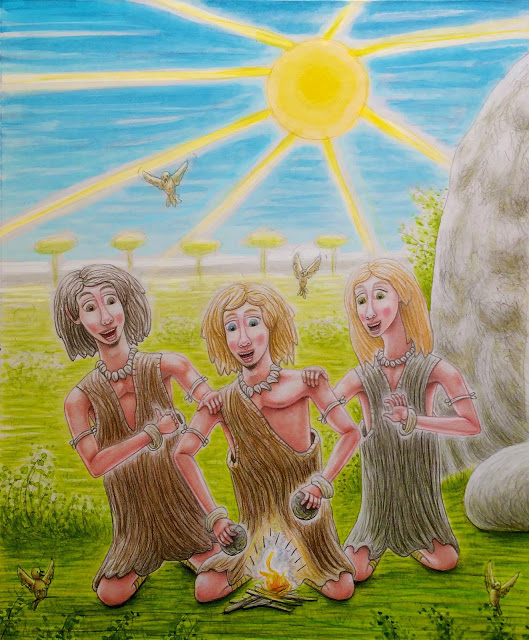 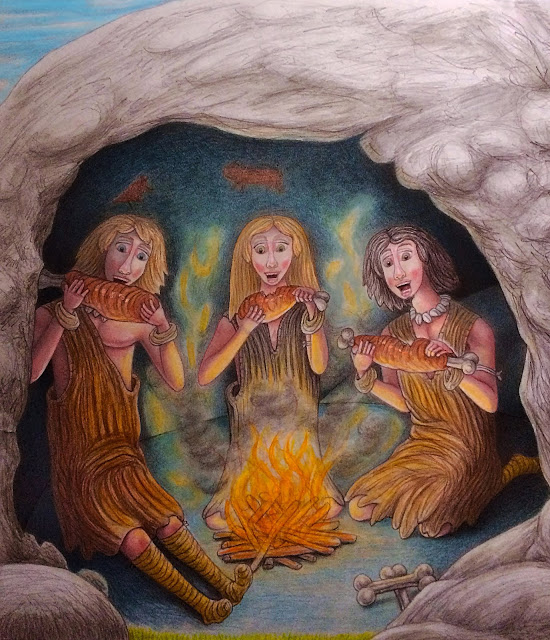 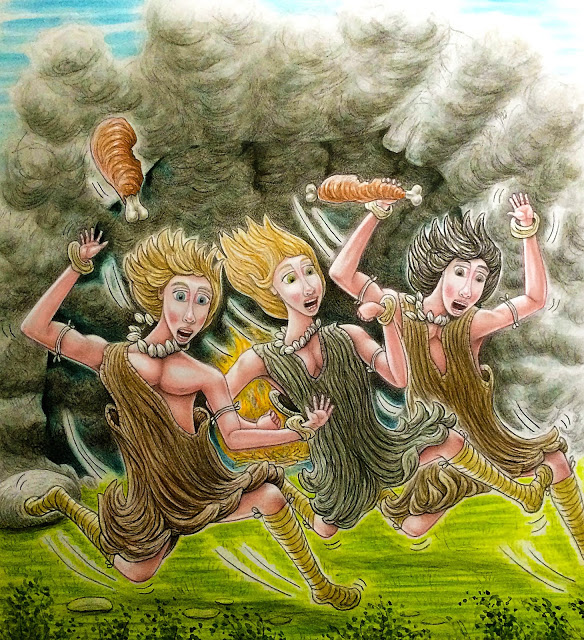 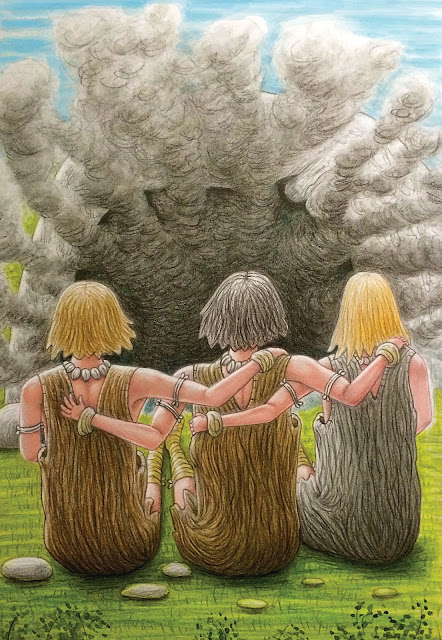 Once all the interior illustrations were completed and signed off as good by my client, it was then time to produce the wrap around book cover. Shown below. 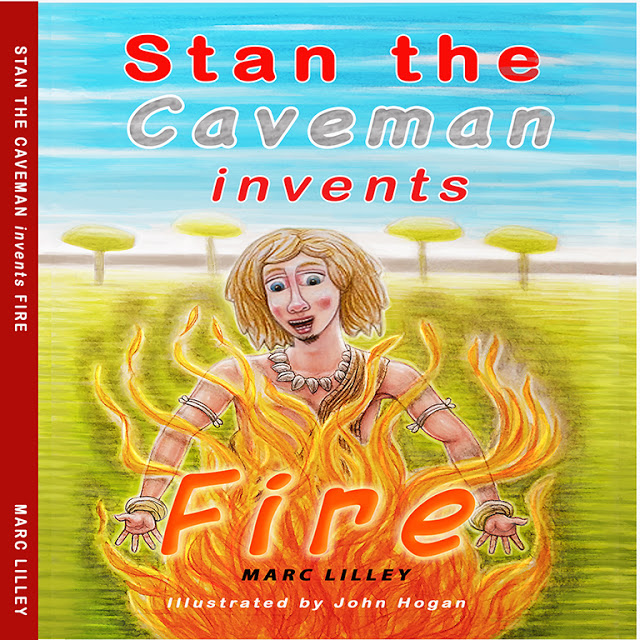 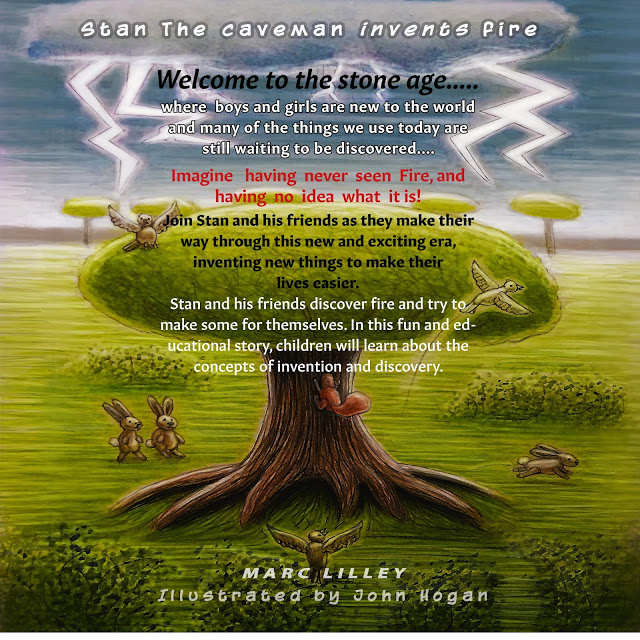 Rear cover
When the cover design was accepted and rendered in colour, I then began the graphic design and book formatting process. I began with the cover, sourcing the type face/font, and setting the text. Once this was complete I then began the interior typesetting and design. I produced  the majority of the graphic design and page layout formatting within Adobe In Design and photoshop. When all was complete and my client was happy, I then saved the work as CYMK in PDF format. 300dpi, 10×10″
The completed work was delivered digitally and the final payment was taken. (I have a three tired fee structure) The whole book , from start to finish was completed in around 4 months,  and there we have it, I hope you enjoyed it and found it informative.
By John Hogan|February 17th, 2020|Syndicated Content|