Skip to content
Previous Next
My progress so far within children’s illustration has enabled me to reflect upon the possible problems associated with this type of imagery. my research has informed my understanding of the complexities and the psychological reasoning and constraints present for an illustrator of children’s literature. For example, I am naturally concerned about the form and content of any work produced.  I enjoy creating work that has a strong meaning or with a moral bias. However, I am conscious of the fact that the work has to be sensitive to the particular age group of the children for which it is intended,the illustrations content and  iconography should be sensitively orchestrated, enabling a positive other than negative outcome for children.
As far as my style is concerned, I have recently had some criticism from a couple of members from my social media.  They have variously pointed out that my work is too sophisticated for children’s books and also that my style is rather traditional, and not of our time, informing me that I should rather push visual boundaries. I pointed out to each of them that this was my natural drawing style and that I have utilised this further to hopefully add to the finished  work, if the final work has a traditional aesthetic, then I am happy to stay with it as my basic principles are upheld. Namely, I see thousands of children’s book illustration through my research and that even if the work is extremely naive, this does not detract from the highly professional status in form and technique, as opposed to the mass of work that is at best fairly well done. I believe in high standards and professionalism, any visit to an illustration agency will show very high standards of work, and this is where I want to position my self. I believe that excellent drawing skills are paramount, as is good design, and the ability to compose and finish an illustration utilising all the traditional skills. Secondly, I do not wish to follow a path where I am once again experimenting ,trying to find a new way of visual representation. I recently read a research article where a vast number of children where asked whether they preferred abstracted or realistic illustration. the majority voted for the representational (realistic)style. I do believe that children respond more positively to more realistic work that has a strong narrative, that entertains, and that embellishes the story, without becoming overtly literal. Most Children, (including myself when i was a boy) love to poor over detail and have a fascination with how things work. My work may not be to everyone’s taste, but as long as it is effective then  that is the best scenario.
Building my portfolio is my main goal presently, I require at least twenty pieces of work a body of work that is consistent in style, and that illustrates my ability to be diverse in subject matter,  different age groups, ethnicity, animals, vehicles etc, landscape, portrait, urban environments. along with various action and dynamism scenarios.  Recently I have decided to revisit anthropomorphism or personification https://en.wikipedia.org/wiki/Anthropomorphism. I enjoy this work especially, not least, because it has extra challenges, but also because it is a powerful tool in explaining or adding visual dynamism.  during the process of producing these images form conception to drawing to finished artwork, I am constantly evaluating and re evaluating the aesthetics of the various elements adjusting as necessary to ensure that the form and content adhere to the naive, simplified encoding. Below are three recent illustrations I have produced that have followed a small piece of self initiated text. 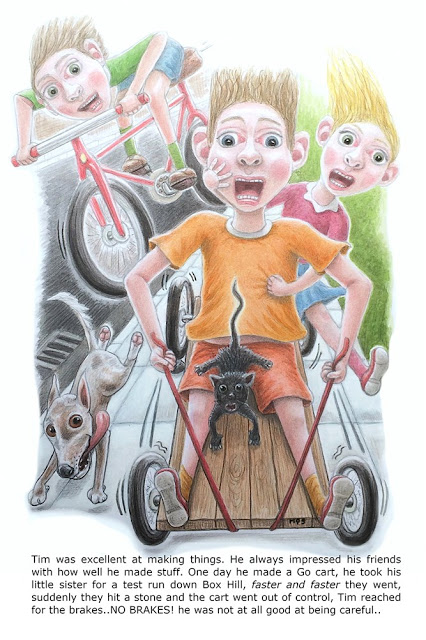 Tom was always making things, one day he decided to take his new build, a go cart, out for a spin, Emily came too, down the hill they sped faster and faster, but Tom had forgotten to make..The Brakes! 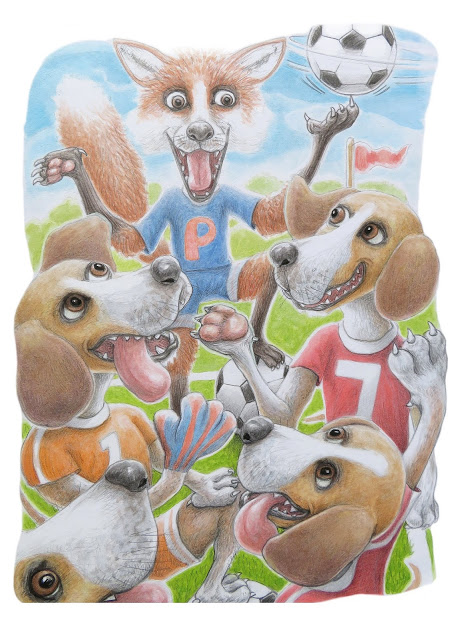 Pete the fox was team leader for the fox and hounds football club, they
where the best team in all the world. 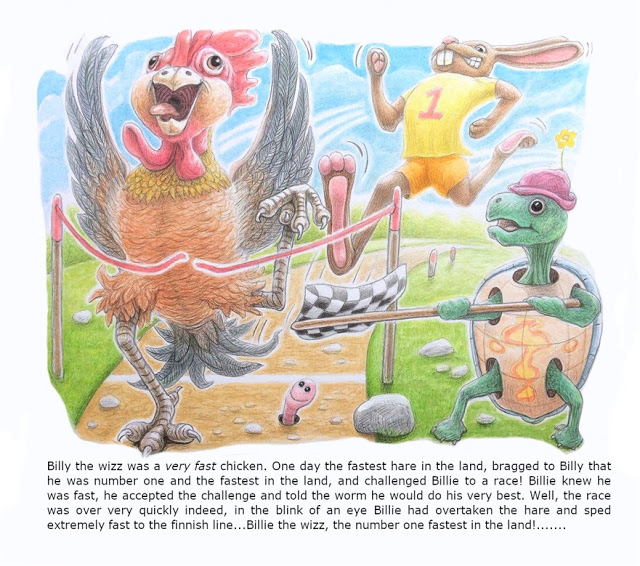 The Hare bragged to Billy the chicken that he was the fastest racer ever. He challenged  the chicken to a race but the hare didn’t  have a chance against Billy the wizz chicken !
By John Hogan|January 10th, 2019|Syndicated Content|