Dave Plunkert’s illustrations have appeared in advertising campaigns for Fortune 500 companies, they’ve graced the folds of major newspapers, and more recently, they’ve been popping up on the covers of magazines. In the past couple months, Plunkert’s work has twice been featured on the cover of The New Yorker. Each illustration was a strong statement piece that elicited plenty of reactions from people of all beliefs. The first image, an illustration of Trump providing the wind for a white supremacist sail, debuted shortly after the incident in Charlottesville and Trumps subsequent inflammatory remarks.

The second illustration came after the deadly mass shooting at a Las Vegas country music festival that ended with 58 people losing their lives and over 500 being injured. Each cover gained national attention for it’s emotional imagery and political statements.

To see more of Plunkert’s work check out his Directory of Illustration portfolio or his website. 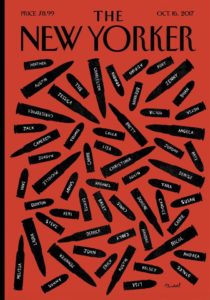 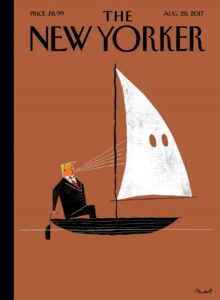