Here I am sitting and waiting for the gesso to dry, before starting a new painting. I thought I would share my ideas on the development of a painter. Most artists throughout history have shown a marked development in their work over their lifetime. I single out Picasso here as an example of the clear transitions he made in the development of his art. It is well documented that he started his painting career as a small boy, and by the time he was a teenager could draw like Raphael, in other words he was outstanding in his technical ability to be able to dry realistic representations like a great master twice his age. I read Picasso’s biographies when I was a boy and realised then that I had to be able to draw realistically other wise people would not take me seriously. I believe this is a prerequisite for any  potential painter. It follows too that a certain technical accomplishment with  painted material  is also suggested to enable an awareness of the rudiments of paint and how best painting  skills can be utilised to fulfill future work. You have to learn to walk before you can run. As a young man I copied old master works, to gain valuable experience and accomplish technical skills, important to my development as a painter.  Below are two works I copied  by Caravaggio and Alan Ramsey with added elements of my own, some elements for advertising.: 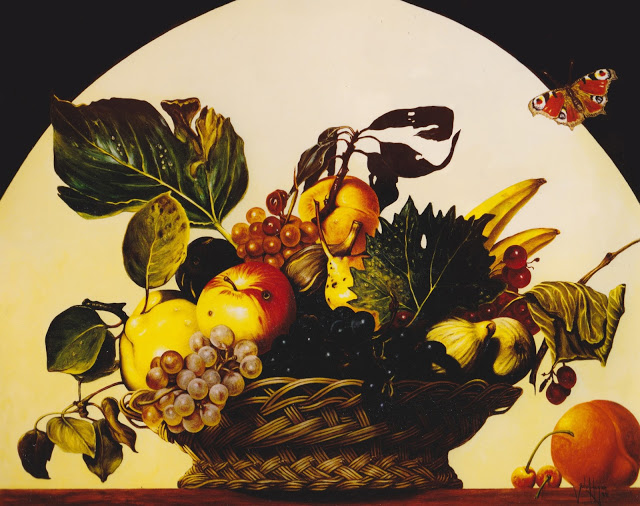 Fruit basket (after Caravaggio) with added elements. Oil on panel 1998 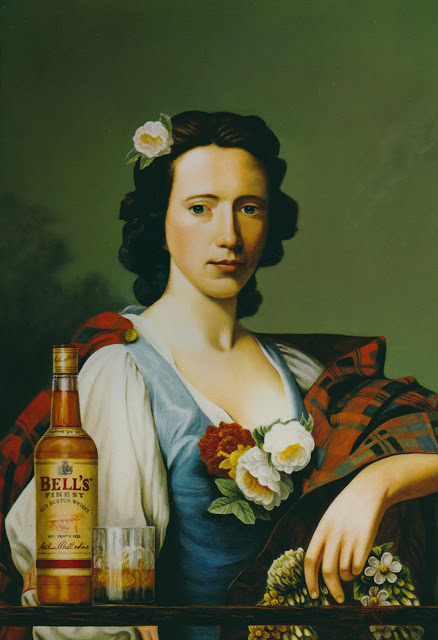 Scotch Whiskey 1998 ( after Alan Ramsey ) with added elements
Picasso didn’t  arrive at the painting below overnight, A number of periods of style change occurred throughout his development as an artist. These changes happened generally when influenced by other painters and movements of art to which he belonged or had known that where popular at particular periods of history. Picasso began painting in a realist manner later developing his own style. Within a 30 year time frame he went through certain  periods such as  his blue and rose periods: Here is a link to concise biography: https://www.widewalls.ch/artist/pablo-picasso/

If there is a plan to a painters development, then it is realised through a determination to accomplish a goal, as Picasso puts it, “Our goals can only be reached through a vehicle of a plan, in which we must fervently believe, and upon which we must vigorously act. there is no other route to success” Not all artists travel through to an end goal of course , some remain in the realist genre choosing to perfect to the highest degree technical wizardry. They stay in this position all their lives. Picasso has taught us that there is a whole lot more to painting than this. The present day where developments in technology and the world wide web has placed artists in a depth of knowledge that we cannot ignore,  like never before we have major influences of artistic development at our fingertips, everything from abstraction to conceptualism. There is an obvious history in the 20th century of conceptualism and abstraction that I haven’t mentioned here. Suffice it to say that this blog is specifically about painting. Although I recognise that their are other methods that artists use to express themselves, I have at this moment in time no wish to pursue conceptual ideas as I believe there is so much more to say in painting, however, this may change in the future. my development has included a period of realist figurative work, and a slow but meaningful transition into a more deconstructed and abstracted means of expression, which I believe can be demonstrated through my website here: http://www.johnhoganartist.com
I am nearing my 49th birthday (this month) I have had major difficulties and obstructions in life in my goal to achieving a new and distinct style. My work has slowly developed and been deconstructed to such a degree that it is unrecognisable now to where I was initially at the start of my career. Within each period I realised there was so much more that I could and should of attained within each paradigm, and on occasion I side step back to a place where I once again test my hand. however, time waits for no man and there is so much to do. Of course I am only young, and hopefully lots of time under my belt still to accomplish my goals. At the present time my work is based upon my wish to realise a new way of representing the world, I remain a figurative painter, however the figures in my work are now deconstructed to such a degree that my work boarders on abstraction. I have experimented with pure abstraction, and in the future it may come to a more fruitful goal. below are 3 paintings from the last 3 months illustrating my steady progress and development, progress that is built upon a base of technical accomplishment and growth. 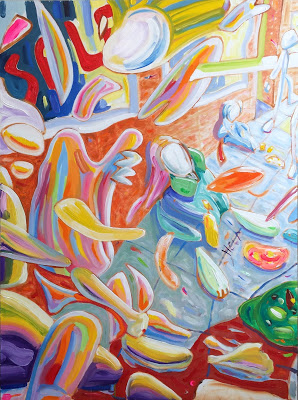 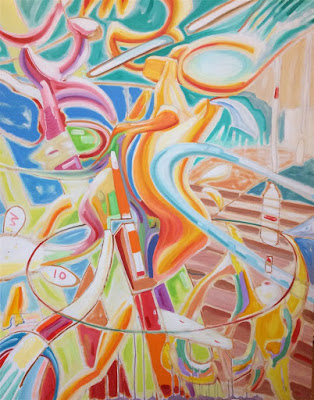 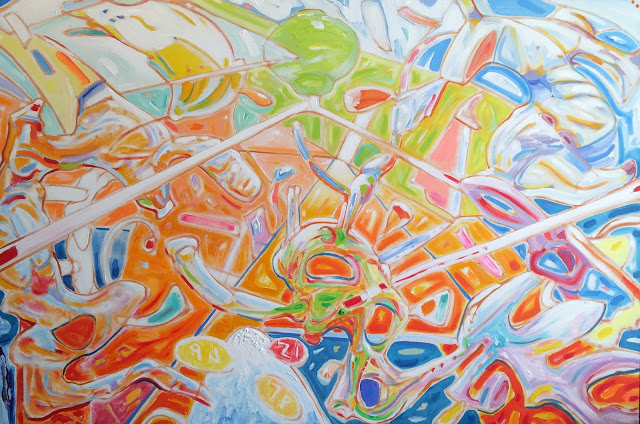 9N7PZ1 2017/18 Oil and acrylic
I aim to push my current aesthetic further. I want to embed my work in a new futurist ideology. One that places the work in a new context other than the world we inhabit. There is no need for titles any longer, as I wish to impart a new meaning to the work, the numbers and letters are both an indication of the time, place and sentiment, a short hand, a reflection of the ever more influential aspects of modern living, namely technological, and  scientific, development. I am aiming to produce work of this time, that fits into this time, along with a look to the future, I do not wish to merely illustrate  science fiction, rather I wish to envelop the iconography, ideology and aesthetic of living in the 20th century. An expression of our time.
By John Hogan|January 7th, 2019|Syndicated Content|