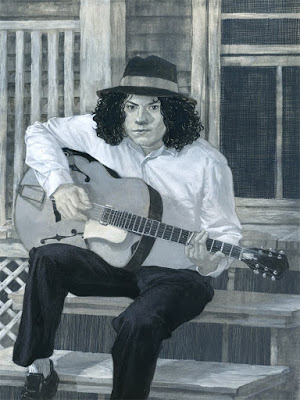 I started working on this piece for an assignment for my second Tutormill class, Realistic Portraits with Tim O’Brien and Nathan Fox. The illustration had to fit Rolling Stone’s format as a possible cover. The heart and soul of a lot of White’s music comes out of the Mississippi Delta Blues tradition so I decided to show Jack as a Blues musician from the ‘30s.
The finished piece is gouache, graphite, ink and acrylic. I’m considering adding textures, grease spots and cracks digitally to create the illusion of an old photograph, but I’m still on the fence. Any feedback on this (or any aspect of the illustration) would be awesome.
In case you’re wondering, the title comes from the name of Jack White’s favorite song, a blues anthem written by Son House in the ‘30s. I think it suits the starkness of the portrait and Jack White’s independent attitude toward life.

About the Author: Erika Steiskal