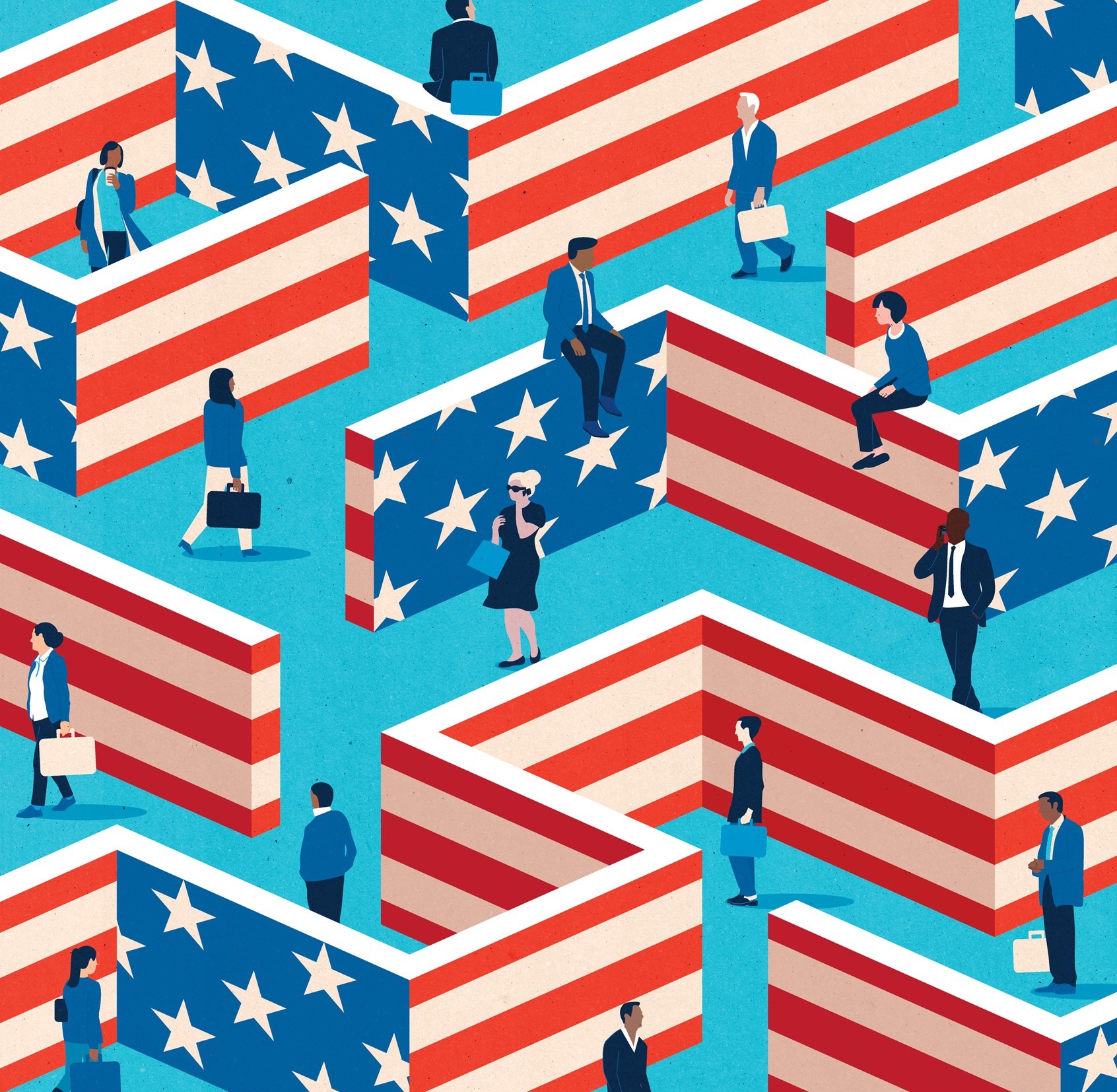 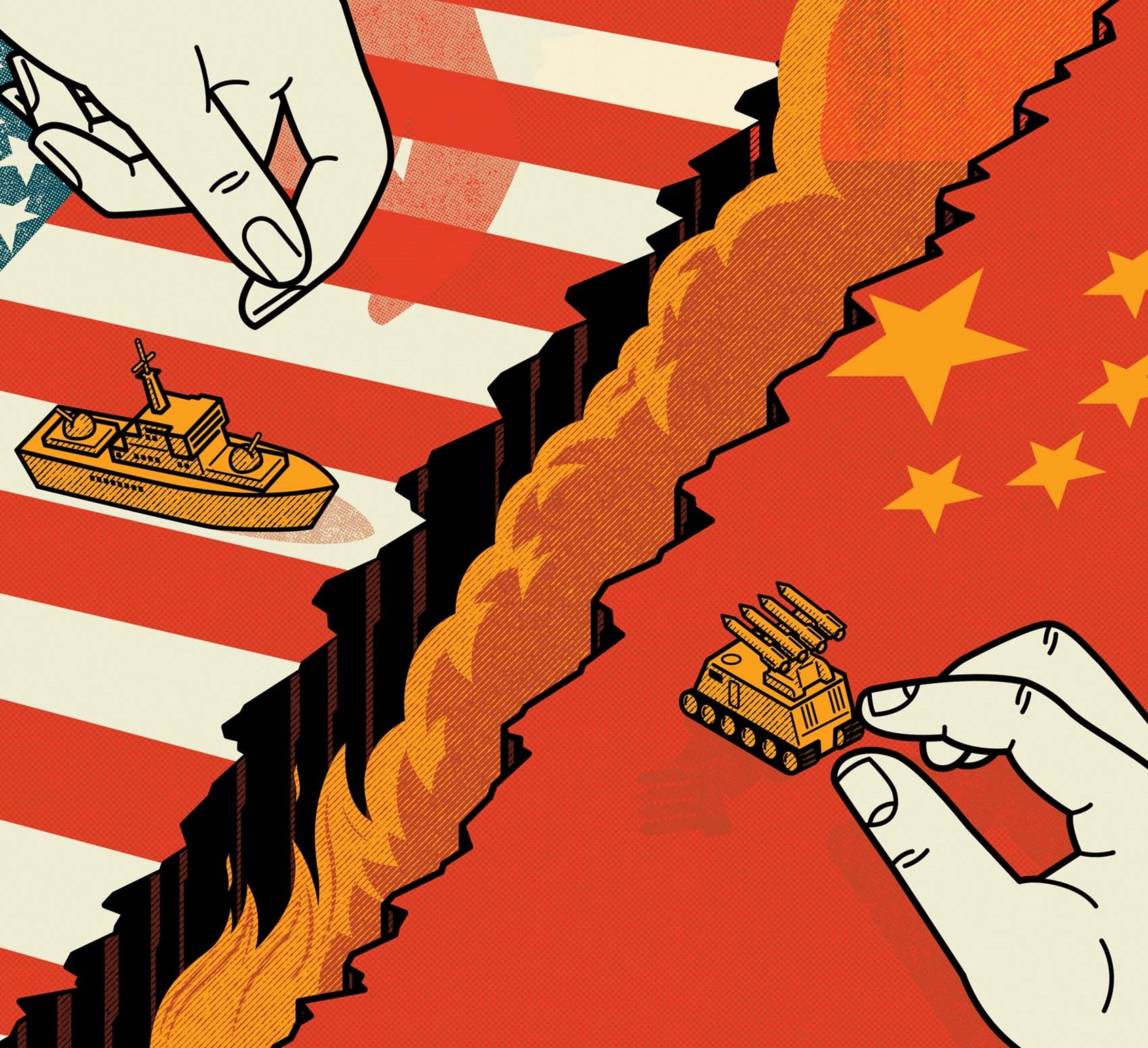 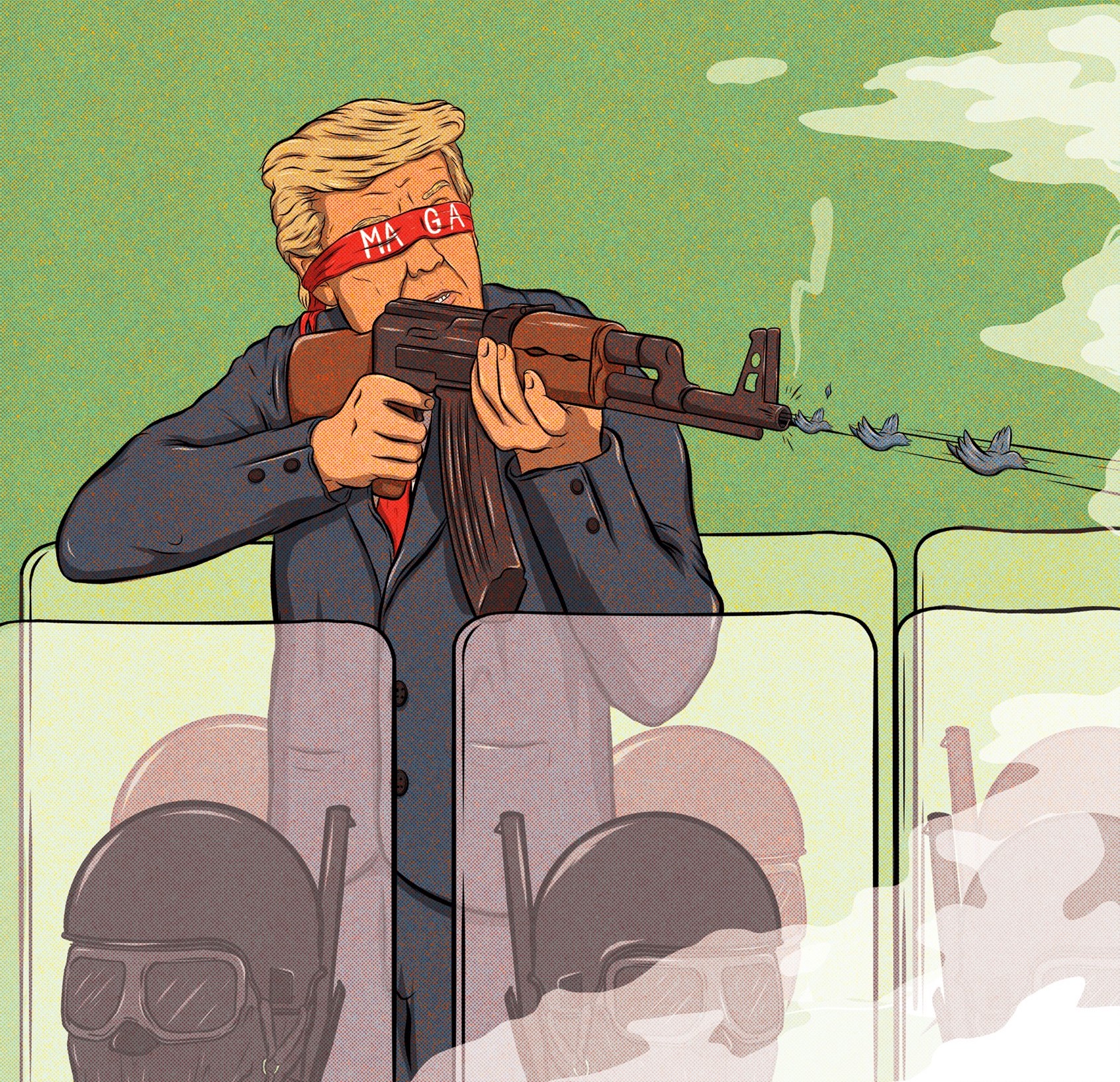 From elections and national policy, to trade agreements and international relations, 2020 is a landmark year for political news. The Directory of Illustration concludes its monthlong series of editorial illustration with a feature on some of the best political illustrations from DOI affiliated artists. The new decade has ushered in a tense and chaotic political landscape as governments strive to protect their citizens and mitigate the economic recessions brought on by Covid related lockdowns. 2020 is the year where everything becomes political. As we struggle to stay abreast of the onslaught of news stories and partisanship, these nine artists help bring some normalcy and humor to an increasingly surreal world. Whether through satire or stylization, the ongoing work and breadth of these artists is quintessential.

Kotryna Zukauskaite created a series of illustrations for The New York Times Special Report: DealBook. This issue, titled, “Business Takes on Policy,” discusses business and civic leaders’ responsibility in solving the biggest challenges faced by our nation. Kotryna illustrated the cover image as well as six spot illustrations for The New York Times that accompany each section of the report.

Kotryna Zukauskaite is an editorial illustrator working worldwide from Vilnius, Lithuania who recently earned her Master’s degree in Arts & Cultural Enterprise at Central Saint Martins, London. With a self-proclaimed  “head full of random scientific and historic facts” her forte is translating complex information into comprehensible imagery through visual metaphors and humor. Can Taxing the Wealthy Fix the Economy? What Will End the Student Debt Crisis? This piece is Max’a representation of the inflammatory and threatening remarks Donald Trump made to the American public after George Floyd’s death.

Max is a freelance illustrator living and working from his hometown of Portland, ME where he teaches illustration at the Maine College of Art. Raised on horror films and 70’s punk, he began creating at a young age, experimenting with film, sculpture, painting, and finally focusing on illustration. Drawing on his love for the absurd, quality gimmicks, and wordplay, Max takes influence from everything from B-Action Movies, to early adventure comics and, of course, the real (weird) world.

Christian Dellavedova graduated from IED (Istituto Europeo di Design) where he currently teaches illustration.
Since 2012, he has worked at Container Studio, sharing space with other professionals with over 30 years of experience, in advertising and illustration. He lives and works in Milano, and is a regular contributor to the Italian magazine Internazionale, the most important political magazine in Italy.

From the Artist: I have decided to be an illustrator simply because it was the deepest call of my life. Translating a story in a single image was always for me the most exciting challenge. I have taken special interest in editorial and conceptual illustration.

Through the years, Christian has illustrated articles for magazines and newspapers as well helping worldwide agencies in important advertising campaigns. Among others, his clients include:  Viacom, Geico,  The Boston Globe, Variety, Scientific American, Wired UK, Time Out, Reader’s Digest, Men’s Health, Men’s Journal, and Time Inc.

Cover for magazine about WWIII

“Is America’s Antibiotic Supply at Risk?” for The Wire China “For the Least of These”

‘Truly I tell you, whatever you did for one of the least of these brothers and sisters of mine, you did for me.’ Matthew 25:40-45 A digital mosaic portrait of Pete Buttigieg using stained glass techniques.

“Donald Trump: Made with Dollars” A mosaic portrait of President Trump made out of pieces of USD banknotes. Created for an article on The Hollywood Reporter titled “Trump gave Hollywood a raise?”

Charis Tsevis was born in Athens in 1967. He studied visual design in Athens and Milan and currently lives in Paphos. He has been working for decades in the field of advertising and communication while teaching and researching visual communication. His digital mosaics have gained recognition internationally and his personal style has been imitated worldwide. His client list includes Nike, IKEA, Toyota, TIME, CNN, The Wall Street Journal, Leo Burnett, and Saatchi & Saatchi. His interest in sports and politics has had an impact on his recognition as a portrait artist. In the U.S., his works have been featured in President Obama’s election campaign, the American Olympic team, and the US Football Association. “Take from the Poor, Give to the Wealthy” for The New York Times

Mike spent his childhood on forest walks, biking through trails, and admittedly a little too much time on the internet in the Winter. Graduating from OCAD University’s illustration program in 2011. He now works from his studio in Toronto, enjoys cycling, hanging with his cat, Solly, and exploring the countryside on his motorcycle. 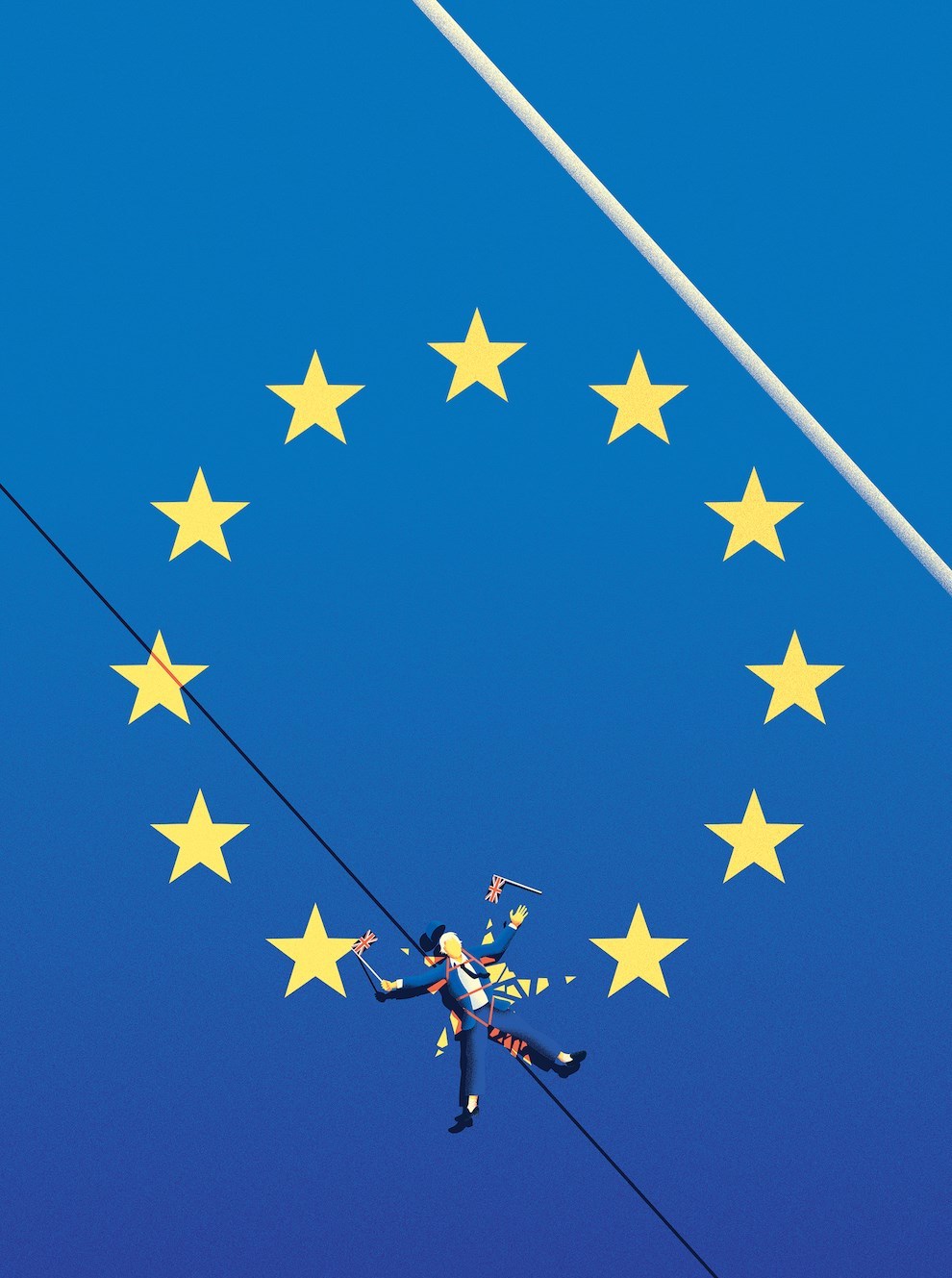 After achieving a degree in Graphic Design while studying in Dundee, Jack spent the next ten years at a selection of design agencies across the UK, where he worked with clients such as the BBC, National Trust and Royal Bank of Scotland. In 2015 Jack followed his true passion and became a full-time illustrator, he now happily spends his days at his studio in the heart of Glasgow’s Merchant City, where he produces work for a worldwide client list including Adele, Foreign Affairs Magazine and InVision. 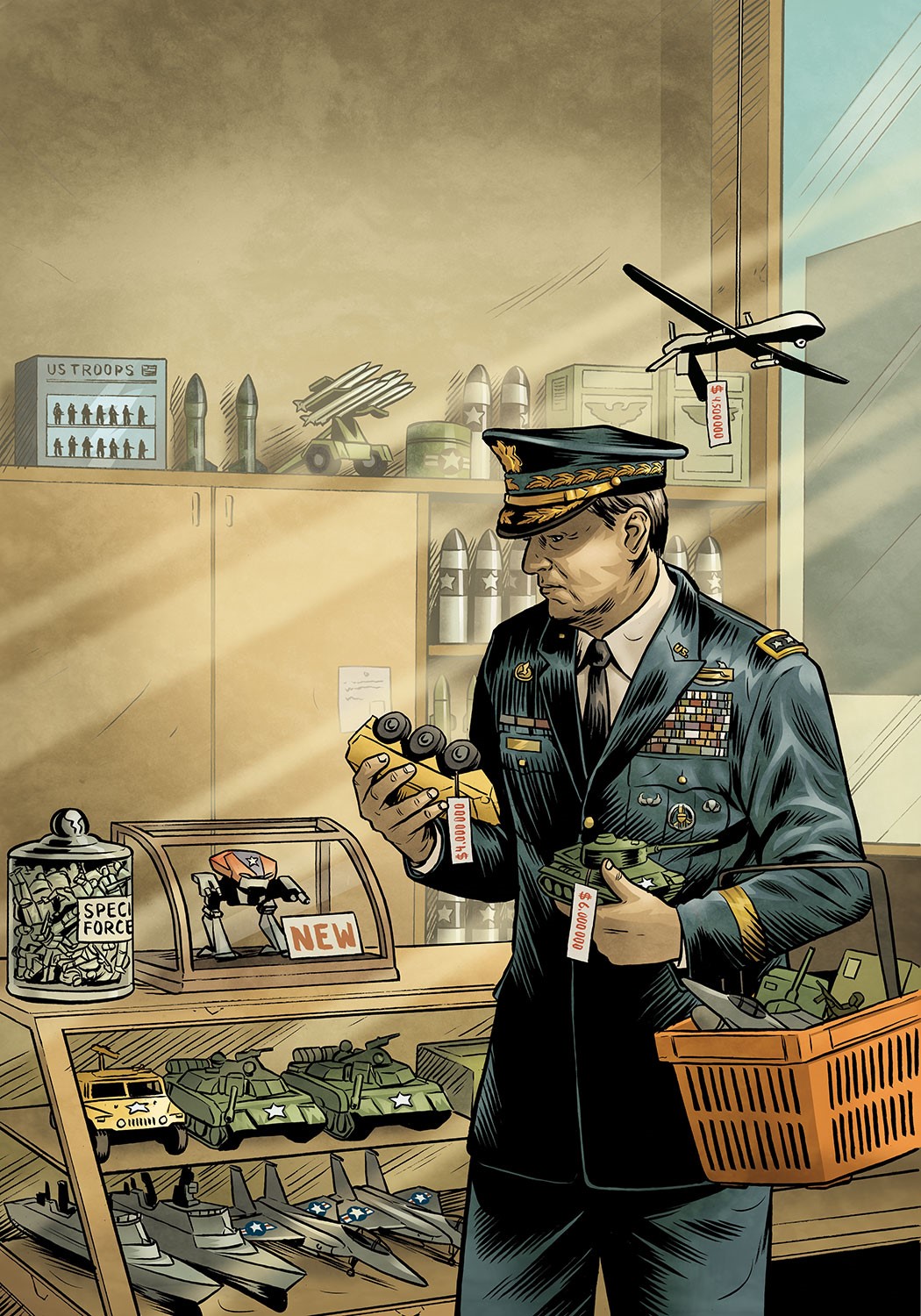 Satire on the military industrial complex

Niklas Asker is a Swedish illustrator, graphic novelist, and painter. With over 10 years of experience as a professional artist, Niklas has worked on a variety of projects ranging from television to editorial illustration, as well as adapting the bestselling novel “The City of Ember” by Jeanne DuPrau, into a comic for one of the world’s largest book publishers: Penguin Random House.

From the Artist: I consider the traditional, time consuming painting techniques I use as a form of ritual. It’s a conversation with history but also a tool for carefully digging into the subconscious. Painting as a kind of excavation. My focus during the last few years has been to examine the blurry border between the figurative and the abstract and how the two can merge to create new visual expressions.

In 2009, his first original graphic novel “Second Thoughts” was published by Top Shelf Comics; a novel so successful, that it has since been translated into 5 different languages. Since then, he has started painting again and after being accepted into the Liljevalchs Spring Salon in 2011 and 2012 he started exhibiting regularly in Sweden and Abroad.

When he is not illustrating, he writes novels for young readers. He is the author of the Wednesday Tales trilogy, which has been published in over a dozen languages, and The Hidden Boy, both from Harper Collins. His novel The Palace of Laughter was shortlisted for the Bisto Book Award.

From the Artist: I’m equally at home working in traditional and digital media. I’m always happy to get in at the ground floor on a commission, providing concept sketches with originality and wit, or helping to bring a fresh perspective to maximise the impact of an existing idea.

Jon’s illustration work has been recognised by Creative Quarterly, the Society of News Design, Communication Arts, 3×3, The 4As, ICAD, IGI and the AOI/Directory of Illustration. “Ditching the Dog Whistle” An award winning cover for the economist. 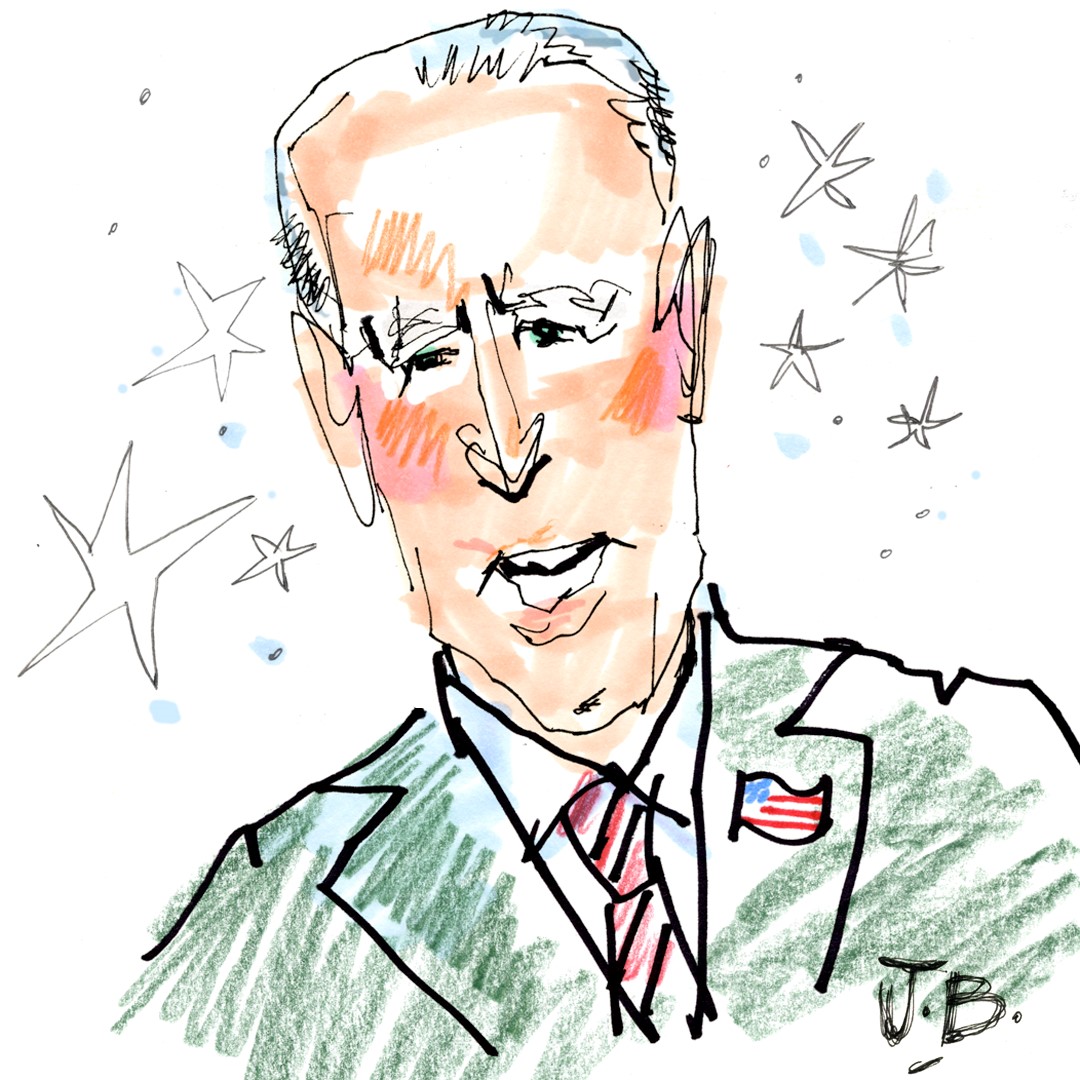 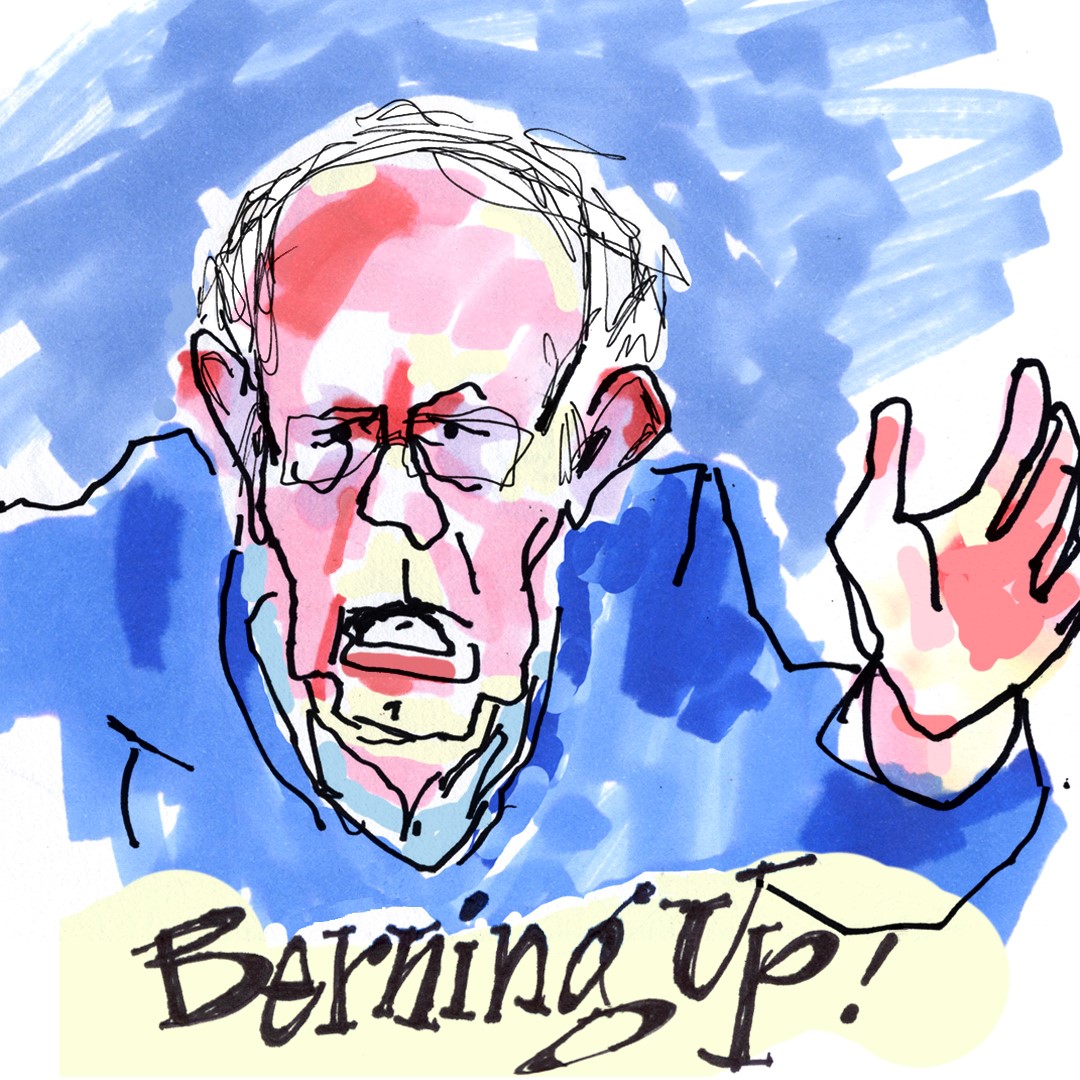 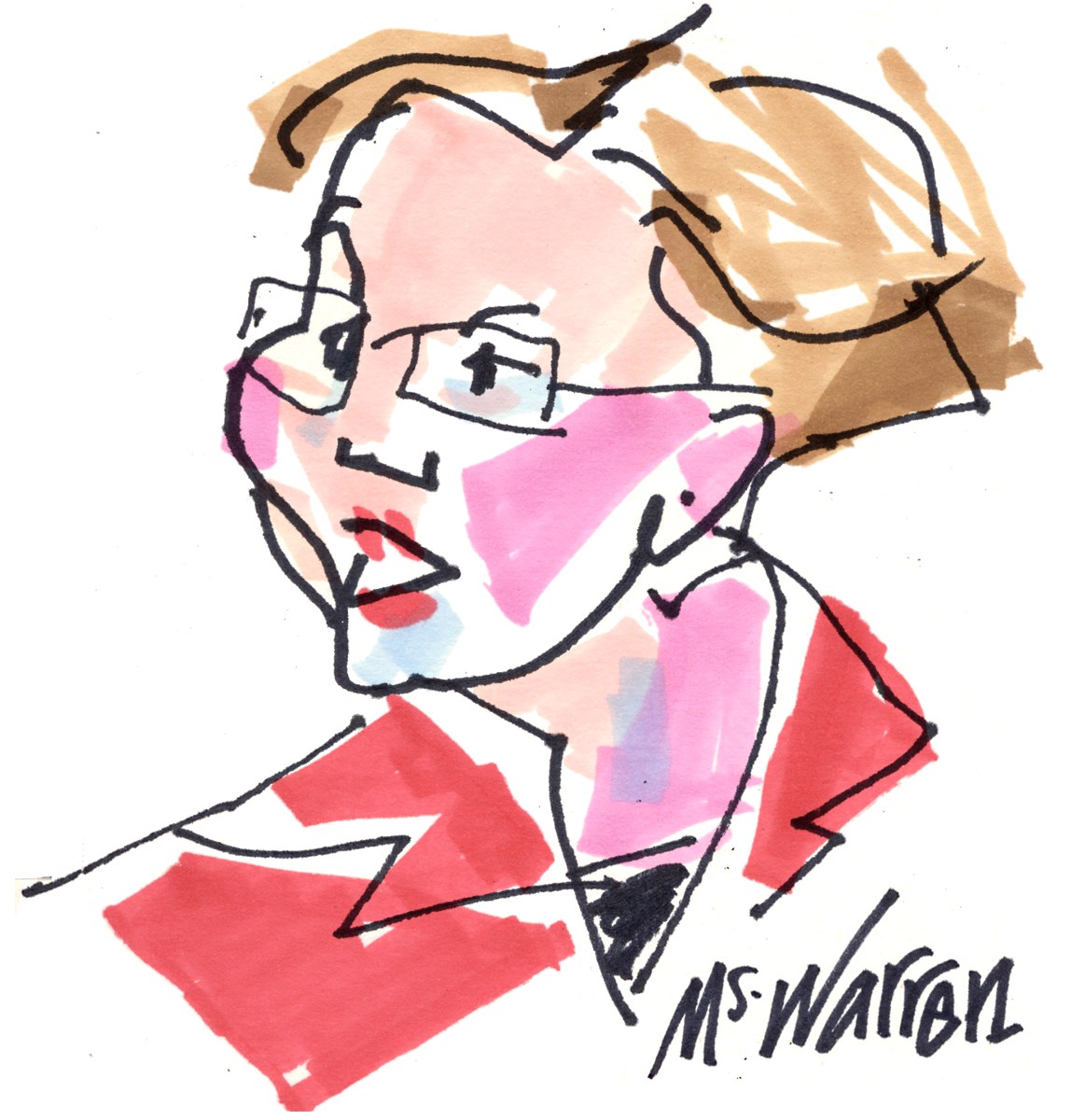 “Quick sketch of Elizabeth Warren from a TV debate”

After graduating from Tufts University with a BA in Art History and French, Cindy spent 2 years as an artist with Hallmark Cards in Kansas City.  She subsequently moved to Chicago and worked in illustration studios, before starting her own illustration business when she returned to her native San Francisco.
Cindy Salans Rosenheim’s whimsical style of illustration appears in trade books, cookbooks, magazines and newspapers.  These political editorial illustrations come from a series of sketches Cindy made during the Democratic primaries. Her images are also found in greeting cards, toys and puzzles, corporate brochures, advertising and merchandise. Recently she has provided lettering and illustration for chalkboards used in retail, restaurants, city agencies and for weddings. Clients include: California Magazine, Harvard Magazine, Harvard University, Hasbro Inc., Macmillan Publishing, Natural Health Magazine, New York Times, Random House Publishing, Ravensburger Puzzles, San Francisco Chronicle, Stanford University School of Business, Time Life Publishing, Wall Street Journal, Warner Bros. and many more.

About the Author: Ian Carradine

Ian is a social media consultant and content creator. He lives in the Swiss Alps and enjoys photography, philosophy, and literature.