Gabriel Moreno has been recognized as one of the most influential illustrators in the world of advertising during the last decade.
He has created covers for the Wall Street Journal and LA Times, being the only illustrator ever commissioned for the latter.

He has carried out campaigns for some of the most prominent brands in the world, including Nike, Rolex, Victoria’s Secret, Coca-Cola and more.

In recent years, Gabriel Moreno has also developed his personal line of work by creating elegant pieces that make striking statements about female beauty through the use of flowing and precise fine black lines with shocks of accenting color.

In order to fulfill his vision he works with etching and multiple artistic mediums and tools such as pencil, ink, marker, watercolor and digital art.

Gabriel Moreno is represented by Début Art, an artist agency that promotes one of the finest and most contemporary leading talent groupings in the field of illustration today.

We caught up with Gabriel Moreno and Andrew Coningsby, owner and Managing Director of Début Art, to talk more about Gabriel’s personal and commercial work.

When did you begin exploring and painting feminine sensuality as a theme?

I’ve been exploring my love for women ever since I can remember. Since I was a small boy I observed women a lot, so it was inevitable that when I began painting, I would use that as my focus. When I was in college I had the option of choosing any theme to work on and I always created something relating to women. Most of it has to do with my interest in the aesthetic of feminine sensuality, which is independent to my relationship with art and inherent to my person. It has always been an object of particular curiosity.

What mediums have you been using in your most recent personal work?

My work is mostly line based – realistic and rooted in drawing. In my latest work I am trying to get away from that a bit by adding a more abstract aspect – less controlled and incorporating more color and materials. The idea is to maintain and find the figurative aspect while it dissolves and integrates with the more abstract part. 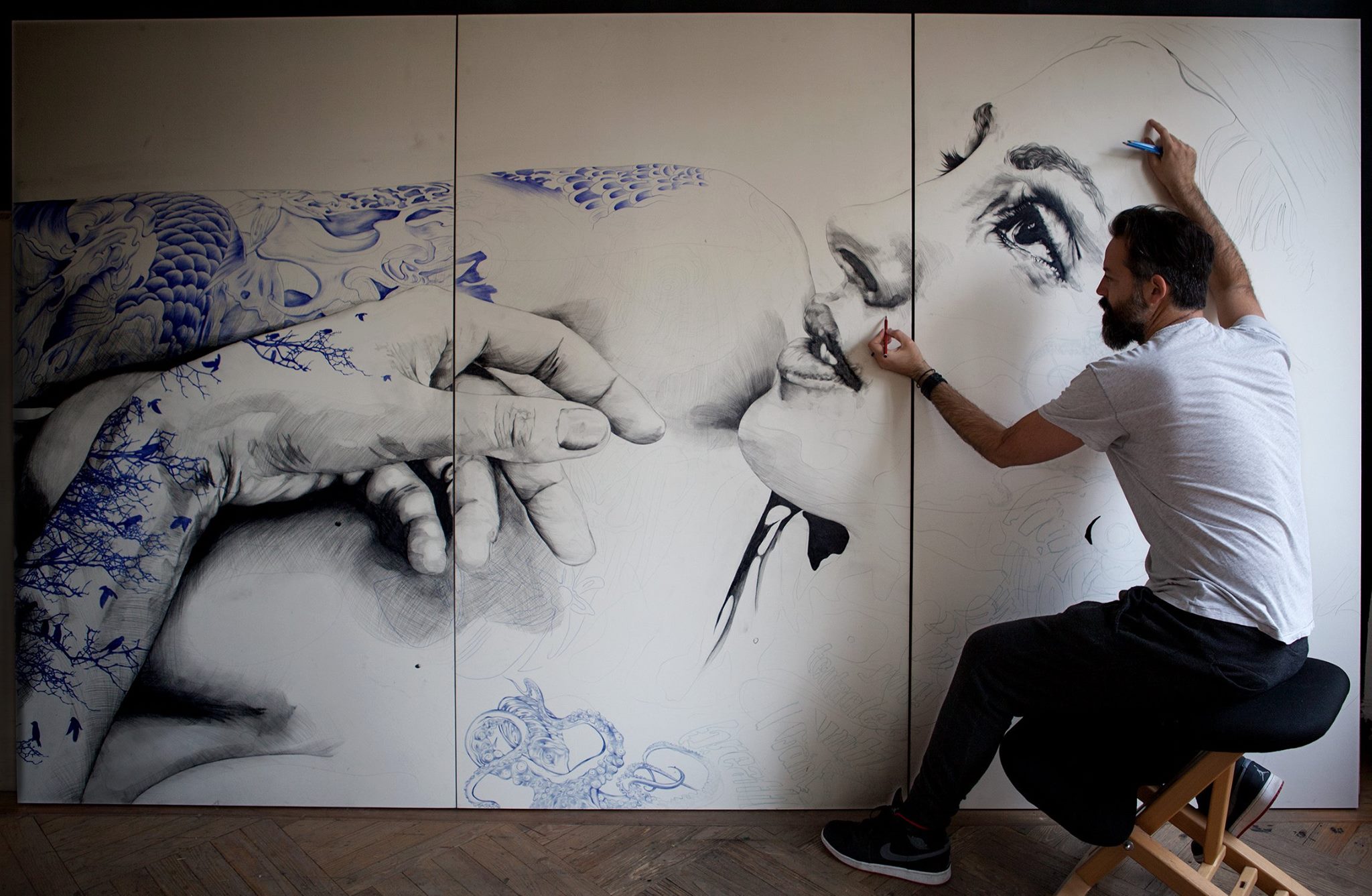 Can you give us a brief glimpse into your artistic process?

I always photograph the models (because I have a terrible memory) and then select the images that I think will work best. Next, I draw her with pencil and add texture. Finally, I incorporate the medium and integrate everything together.

What is your end goal for the work? What do you want the viewer to take away?

As much in my personal work as my commercial jobs I want the viewer to fall in love with what they see – to feel the same about the artwork as they would before a real woman. When it’s a personal piece I try to add more mystery – something that makes an impact and that has contrast, mythology, and fantasy. I want the viewer to not only fall in love with the piece, but to also be moved by it. 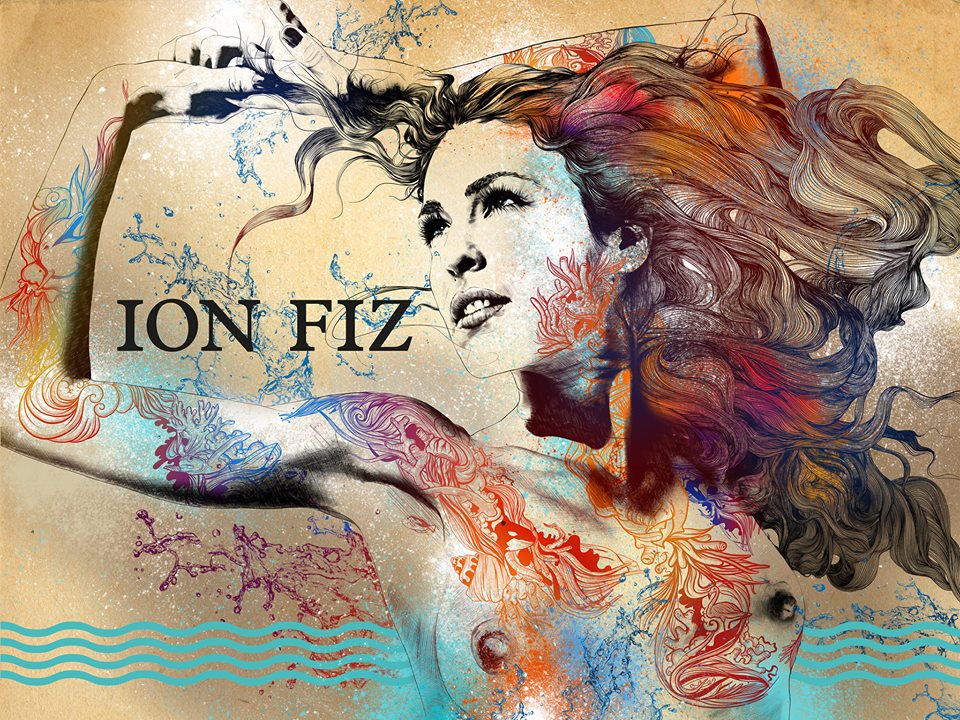 As part of Mercedes Benz Fashion Week 2014 Gabriel Moreno collaborated with designer Ion Fiz for an exclusive clothing collection entitled Aftersun. Inspired by the sea and coming of the summer, Gabriel’s work for this collection focused on evoking dynamism using wavy lines that remind us of summer elements like the breeze, dunes, reefs and waves.

How did this collaboration come about? Had you worked with fashion designers before?

No, I had never worked with fashion designers. I had recieved a few offers before, but I either felt it wasn’t the right time or that they weren’t serious. However, it’s something I had always wanted to do. One day, Ion sent me a letter telling me he loved my work and wanted to collaborate – and that’s how the project began. 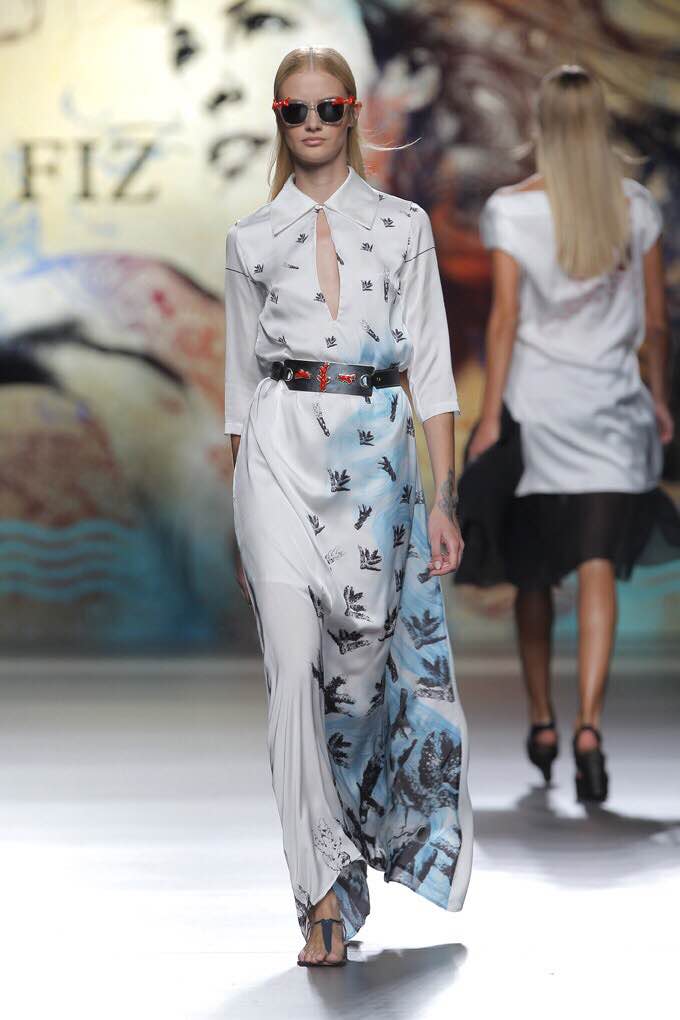 What were the challenging aspects of creating artwork for a clothing company?

A piece of clothing is something that is alive so everything had to be created with movement in mind. We also had to consider the type of material being used, how it fits, and the vision of the designer.

Did you have a favorite piece?

There was a long silk dress where the artwork spanned from the chest to the ankles. I think this was the true embodiment of the collection. 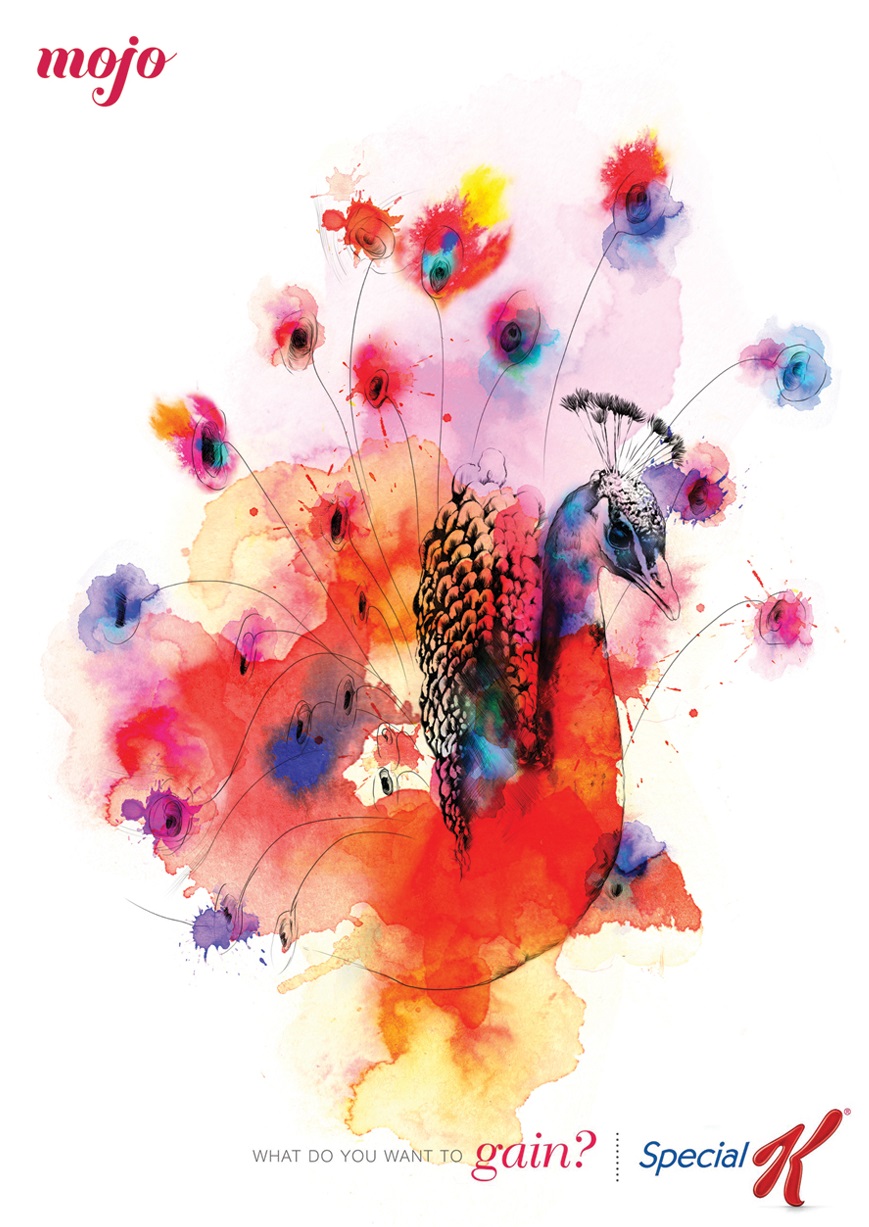 What approach do you usually take when starting a new campaign with a new client?

There are particular aspects of advertising which, in theory, are the most important: creativity, spontaneity and magic. Usually during meetings with clients they pay particular attention to these things. When a new project is being planned I try to reduce everything to an exact math, to the most important part of the briefing: the target, the concept, etc. For example – woman standing with Coca-cola in her hand, summer, younger audience, music – this is all I need to create the piece,because all of the creativity and magic comes out when I start to work; it can’t be programmed, it comes from inside. Many projects often get lost in this aspect instead of concentrating on the practice. Advertising is a business, not an art gallery, so having your concepts down is extremely important. The phrase “we love your work, you have the freedom to do what you want” is the worst thing a client can say to you when you’re starting a project. 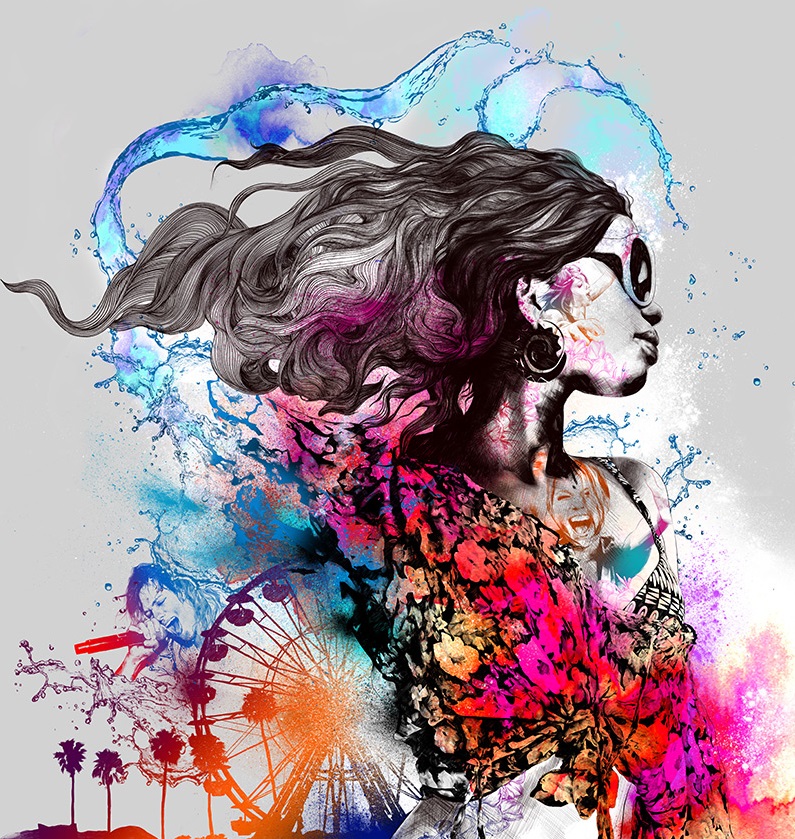 What do you think is unique about your work/method?

Most characteristic of my work is the use of charcoal, watercolor and oil. When you mix these three mediums, it’s easy for the work to have a more classical look to it, but through composition and the use of color the result is actually very modern and real looking. 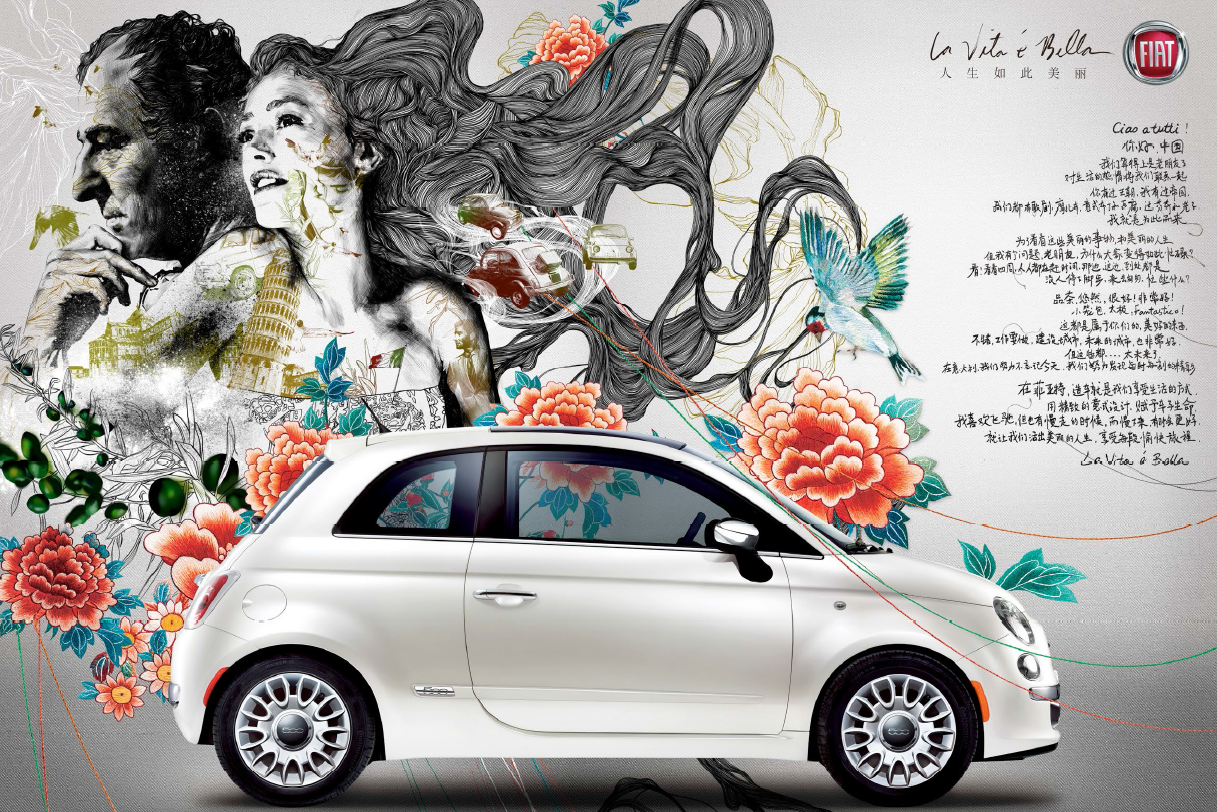 What’s been your favorite campaign you’ve worked on in your career thus far? Why?

There’s been one project in particular that has been very special for me as much on a creative level as for what it has meant for my career. Before, I wasn’t sure that my personal and commercial work were related or fed off each other. I created a series of works for my first exhibition whose base was the characteristic way I can do hair – like threads of yarn intersecting to form figures such as birds and flowers. It was a bit of a long shot to think that this could relate to a commercial work. One day the Los Angeles Times reached out to me to illustrate an article about Gustavo Dudamel, the new conductor of the Los Angeles Philharmonic Orchestra, and they wanted me to create the artwork with the same style of intersecting lines. The resulting work was a piece which was bursting with personality and which worked very well because it was so descriptive. Subsequently, the magazine decided that the news was going to be the cover, asking for another illustration for it. The project marked a before and after in my projection in the international market. 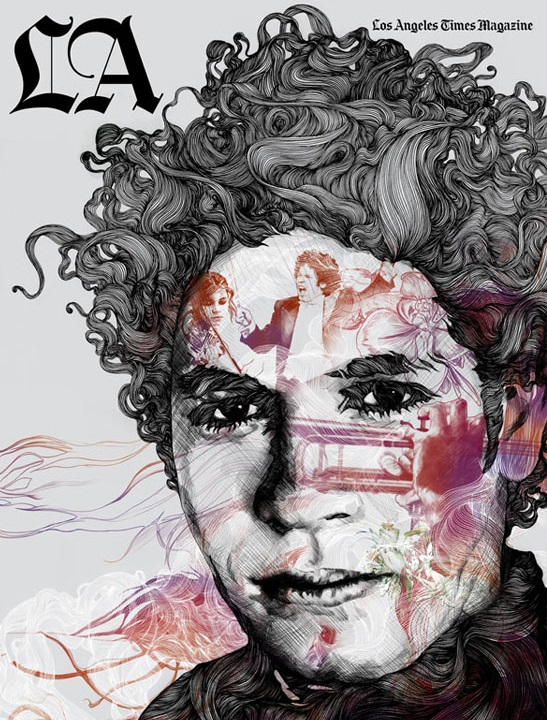 Do you have any words of wisdom for illustrators who are just starting out?

This is a field saturated with competition, but the areas you can work in are very specific: publishing, advertising agencies, agency representation. Focus. Draw for at least 10 hours a day and if you finally get the chance to be an illustrator consider yourself to have the most beautiful job in the world.

Originally drawn to the intricacy and elegance of Gabriel’s line style and the soulful nature of his work, Andrew Coningsby has represented Gabriel Moreno for the past six years. Below, he weighs in on Gabriel’s work and gives his advice for illustrators seeking representation. 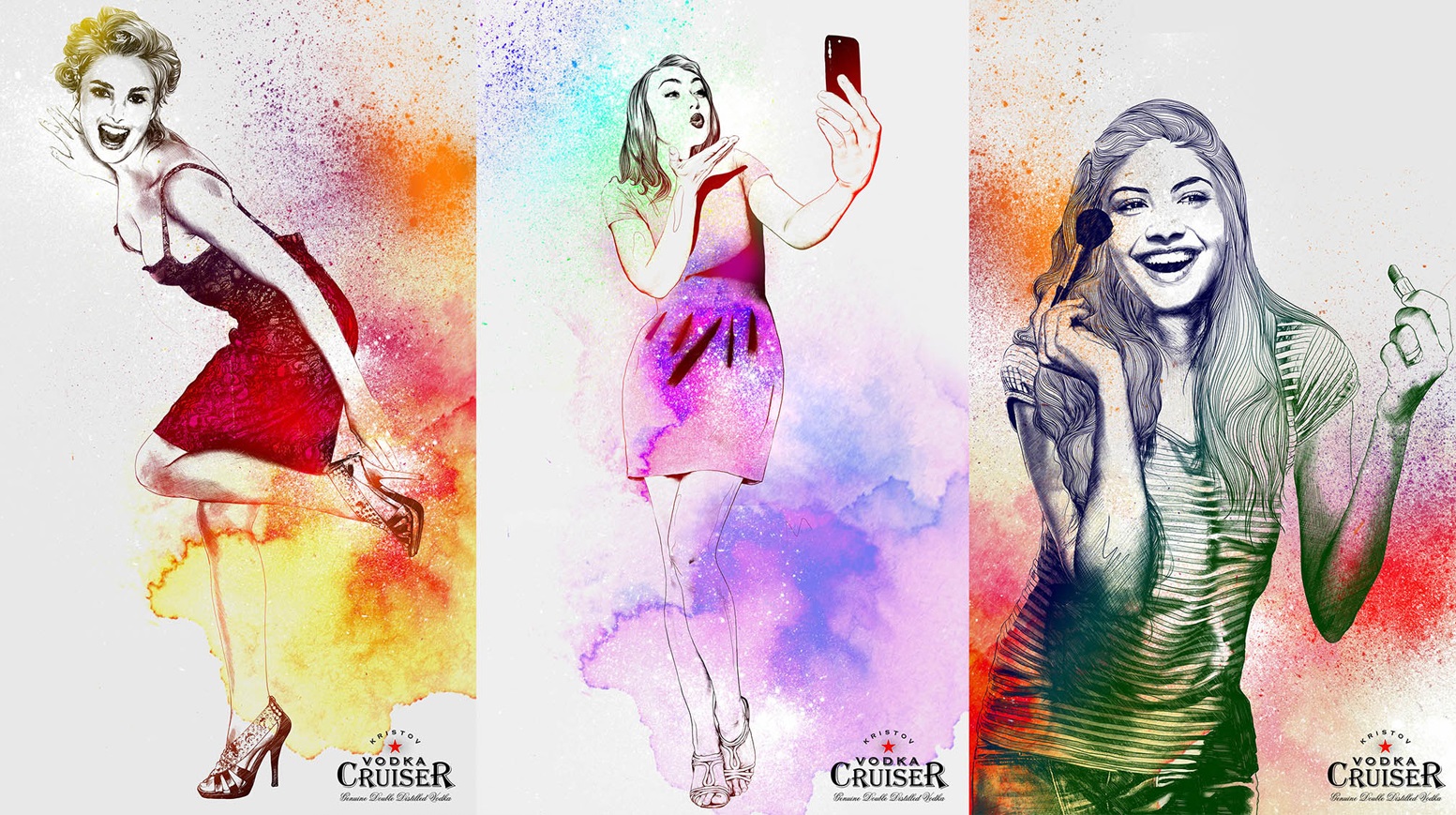 Why do you think clients seek out Gabriel’s work?

The feel of Gabriel’s work is contemplative, humane, direct and observant. Many clients find that those qualities are things they want to use in their commercial messaging. Gabriel is also expert in the depiction of women and I think that clients find his depictions refreshing and useful in a world where many depictions of women seem to merely objectify them.

As an artist agent, what qualities or characteristics do you look for in someone’s art?

Excellently executed work in which an original style enhances the ‘message’ or feeling the artist is conveying. Good ideas and the ability to convey a message or story. Work which is soulful and speaks to people as individuals on personal and professional levels. Goosebumps work! Also, illustrators who can depict a wide range of subject matter well, especially people, faces and objects and ‘settings’. 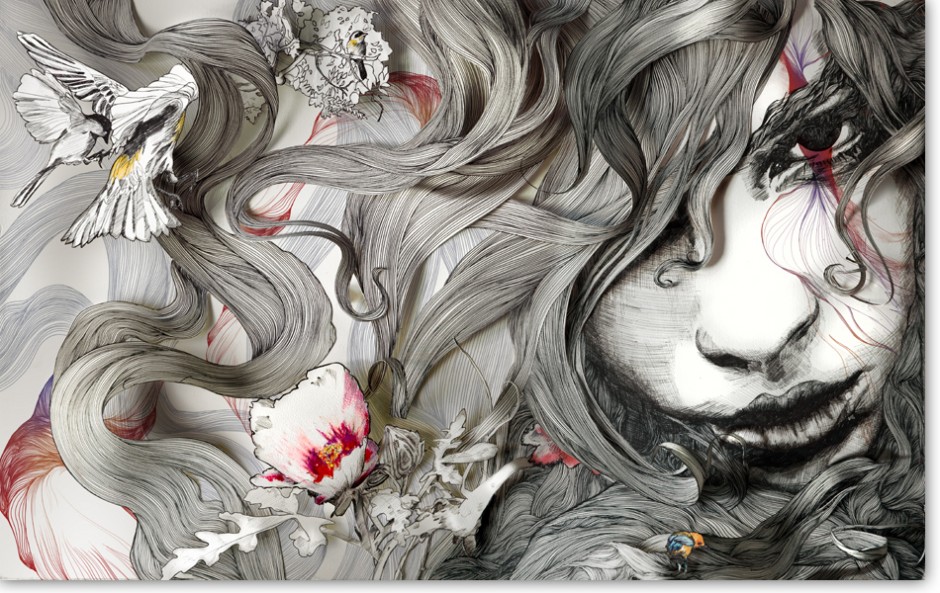 Any advice, from an agent’s point of view, for illustrators who are seeking representation or to increase their exposure?

In a world where there are more image-makers than ever before, spend some time (almost before you even start creating images) to get to the heart of who you are as a person, what makes you special, how you’d actually like to be special/what you’d like to represent as an artist, then commit that to your work. Find your own voice and try to develop an original style and approach to compliment what you want to represent. When you’ve produced some work that you think achieves these things, then your work will be best to be represented by an agency.