The client from my recent great advertising project as seen in the previous two posts here and here can finally be revealed. The company that chose me to create all this goodness is called BioMerieux, a French based multi-national corporation with a US division that specializes in testing for biological pathogens.

My particular set of illustrations is for a testing machine and process called Gene Up that tests food products before they go out to market to make sure they are safe and free from any food borne pathogens or contamination. I know, exciting stuff, right? Their previous advertising and that of all their competitors has historically been dominated by photos of dudes in lab coats looking through microscopes and similarly boring imagery. I am hoping that the imagery will soon filter into their website, but print and trade show applications are in full swing.

I think it will be refreshing to see something different and unique in this industry. I believe the response will be a very positive one for BioMerieux, one that will definitely distinguish them from their competitors. These illustrations will debut at a large trade show coming up this week, so I am excited to see how my imagery will be used in the BioMerieux booth space and hear how it is received.

The giant panorama will dominate the backdrop of the booth and the other images will also be used at large size. The kicker will be a twelve foot circle of sky suspended above the whole setup, Sounds cool, I can’t wait to see pictures. Anyway, there you have it. 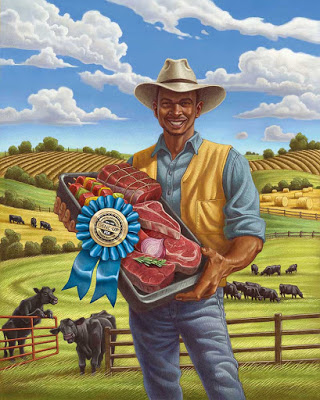 The final reveal from the best project of the year, or recent years, for that matter. Thanks BioMerieux, as well as Preston Wood and Kim Sorrentino at Love Communications for making this project such a pleasure to work on. Knock ’em dead at the show!