Fire and Ice: Taking the Juno to Extremes 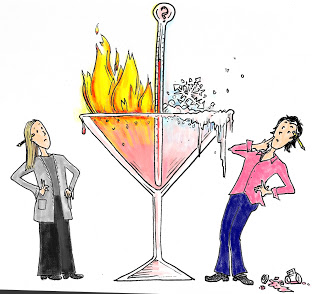 It’s been a while. The writing has been sporadic, but the search has been on-going, spanning continents and states of matter. To wit:

While on a business trip to London, I ordered a cosmo at the bar in the Sanderson, a swanky 5-star hotel, and was surprised when the bartender set it on fire. Actually, it wasn’t the cosmo per se that he lit up, but the orange-zest garnish. Before putting it in the drink, he squeezed the peel and ignited the oils as they burst forth.

The reason to light the zest before putting it in the cosmo is to add caramelized oils to the surface of the cocktail, which I know because I just watched a video about it at http://bit.ly/clUUN.

But I would have to think that whenever something is flambéed in a bar or restaurant, it’s also for dramatic effect. Yet the only reason I saw this dramatic flourish was because there was a mirror behind the bartender, whose back was toward me as he squeezed and lit. Why bother to light something on fire if the customer can’t even see it? The cosmo was pretty good, though.

On the opposite end of the thermodynamic spectrum, this summer Barbara experimented with frozen cosmo/junos, or frosmos. The inspiration was the purchase of a Magic Bullet Blender, a handy kitchen device that she swears by, as opposed to my old-fashioned home blender that I just swear at because it’s annoyingly inconvenient to use and it leaks. The thinking was that if a frozen margarita works, why wouldn’t a frozen juno?

We don’t know, but so far it has not. The resulting drink it just a very cold, watery juno. Also, the Magic Bullet isn’t quite powerful enough to make a true slush; probably we need a professional blender or something for that. But we’re also wondering if the proportions of alcohol to ice need to be different? I just looked at a frozen margarita recipe versus one on the rocks, and the alcohol content seems to be the same. Or maybe if we froze the lime juice and cranberry juice before making, that would help?

If anyone has any thoughts or experience with juno fire or juno ice, let us know.