Directory of Illustration artist Giovannina Colalillo, represented by American Artists, was recently honored in the CAPIC Double Vision 2019 competition for her collaborative project with photographer Matthew Plexman. The duo won 1st place in the Popular Vote (People’s Choice) and 2nd place in the Juried Vote!

The CAPIC Double Vision competition randomly pairs illustrators and photographers together to produce portraits of each other in a collaborative theme in their own medium. Because Giovannina and Matthew did not know each other previously, they met a few times throughout the process to get to know each other better and brainstorm ideas. Giovannina told us that she and Matthew “formed a strong friendship” through the project.

The concept for these portraits were inspired by Matthew’s experience being on the painkiller Fentanyl while in the hospital after a serious fall. According to Giovannina, Matthew “had a very vivid hallucination that mind and body were shattering, pixelating and dissolving into the ether, one tiny square at a time.” Matthew’s disconcerting experience resonated strongly with Giovannina at the time, as she was planning to have an eye surgery later that month. The notions of shattering, aging, and memories therefore became central to both of their portraits. 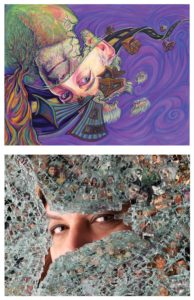 For her piece, Giovannina incorporated elements from Matthew’s personal work—much of which focuses on the passage of time—as well as his description of his hallucination into a mind-bending and enthralling portrait. The houses, road, and tree are all elements drawn from one of Matthew’s photographic projects about a neighborhood lost to demotion in his hometown of Windsor; Giovannina used the image of a tree that remained after the demolition to “represent the tree of life – stability and endurance.”

Entitled “There’s No Place Like Home,” Giovannina’s illustration was rendered using Caran d’Ache water-soluble wax pastels on vellum. In regards to what inspired the title of her piece, she told us that her initial sketches reminded her daughter of the movie, The Wizard of Oz. In the film, Dorothy left her home in search of a better place, only to discover that “there’s no place like home.” Both Giovannina’s and Matthew’s portraits therefore reflect upon and appreciate their pasts, both the “good and breaking through the bad.”

As for Matthew’s digital photograph, “We Belong in Time,” he used the visual of shattered glass and the shard overlapping Giovannina’s eye to demonstrate the many, many memories she has experienced and “broken through.”

Accompanying the pair’s collaborative project is a quote from the novel Davita’s Harp by Chaim Potok: “….Everything has a past. Everything—a person, an object, a word, everything. If you don’t know the past, you can’t understand the present and plan properly for the future.”

We asked Giovannina why they chose this particular quote to describe their project, and she told us:

“That quote perfectly and simply explained that by acknowledging your past you can live better now and plan for your future. Both portraits had us moving forward with the strength and knowledge of our past, both good and breaking through the bad.”

To explore more of Giovannina’s work, check out her portfolio or visit her website.
By Andie O'Donnell|June 17th, 2019|Featured Content|