Here’s how Grace describes this phenomenon:

“Issues such as global warming, immigration, deportation and modern development are forcing some to be pushed out while others are moving in….People are migrating and moving all around the world, our wide open spaces are decreasing with buildings and factories increasing, animals and plants are being driven out by other non-natives and our climate is drastically changing.”

Grace conveys these ideas beautifully in her illustration, describing the process of taking each element from Gast’s painting and putting a modern spin on it “refreshing.” 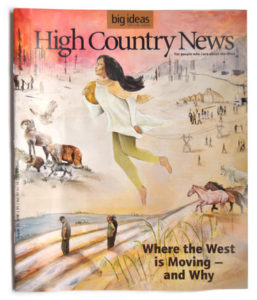 More work by Grace can be found in her portfolio and on her website.