This week, we’re highlighting four incredible Directory of Illustration artists, all of whom are featured in our “Heads Above the Rest” campaign. Read on as these artists explain the context behind their head illustrations and reveal some interesting facts about themselves!

Special thanks to Dave Plunkert, the creative director/designer and DI artist behind our “Heads Above the Rest” campaign.

Sam Falconer’s illustrations combining vibrant characters and intricate environments have been commissioned by clients ranging from leading national newspapers to renowned science magazines and universities. His digital collage work has an especially strong presence within the science and tech fields; because of this, we asked Sam:

DOI: How do your interests in science and tech influence your work?

SF: The science influence initially came through in my personal work, starting out with the Scientific Greats series that in turn led to some interesting collaborations with science publications. Its most direct influence has been on my solo exhibition from last year at The Coningsby Gallery: ‘DEEP TIME.’ The idea was to illustrate key moments in the history of life on Earth, presenting them on a timeline that showed where they stood relative to each other and the modern day. 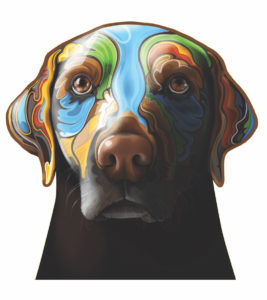 The title of Fausto’s illustration below is “Mental Space,” and it represents the self-consciousness and the “research approach”—two elements that he believes to be especially important in the design process. We also asked Fausto what influences his work, and he told us: “My work is the most influenced by the surrender world, especially by people attitude and culture. But even from colors and travel and the minimalistic design.”

Maria Rabinky works in Richmond, Virginia as an architectural designer and rendering artist, and as a commercial illustrator. She specializes in creating unique illustrative maps, architectural renderings and paintings using both traditional and digital techniques. Several leading puzzle companies have licensed Maria’s paintings and illustrated maps, including Ravensburger, Cardinal and Gibson Games.

Her “Fruits of Thinking” drawing was inspired by the three-faced deities that are common throughout the world. In Hinduism, the three faces represent creation, preservation and destruction. In Maria’s interpretation, the three elements that must combine to bring about fruits are: “the preservation of the ideas that are still relevant; the necessary rejection of the old ideas that outlived their time; and the creation of new ideas that answer today’s challenges.” 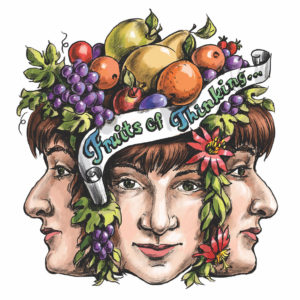 When asked to explain his illustration, Reginald told us:

“This image is entitled “tuning into the beeb.” The aim of this piece is to encapsulate the nostalgia of British television, news and broadcast, and ultimately the BBC. I can almost hear the classic news reel voice when looking at him.”

Fun fact: Growing up, Reginald’s favorite cartoon was Pokemon. He still collects the cards to this day! He has also expressed interest in illustrating card art in his own style one day.