Scott Laumann is both a nomad and a master of reinvention. Not rooted to one place or one style, he moves throughout the world with eyes wide open, taking in form, color and shape and re-imaging geography through his art. He quotes the Chinese geographer Yi-Fu Tuan who said that Americans have a sense of space but they don’t have a sense of place. They know how to move in the space. There’s not any direct relation to the place itself.

“I’m trying to find that sense of place with the work,” says Laumann. “It’s more common these days for more commercial artists to be broad in their approach, maybe largely because of necessity. But that hasn’t always been a seamless transition for me,” he relates. “Portraits have spilled over to ink prints, to oil painting, to working with natural pigments at specific sites to working on more sculptural installations. Sometimes I think I’m more designer than artist in the way I look at things. I’m always thinking about how work I complete can be applied or re-purposed in a new or complimentary way.”

The peripatetic illustrator grew up in Escondido in San Diego’s North County. He has been moving ever since, attending Northern Arizona University, and then to San Francisco where Gerald & Cullen Rapp signed him. Laumann’s early career was defined by award-winning portraits of musicians, and literary, film, and political figures for Rolling Stone magazine. He has done numerous commissions for Time, Rolling Stone, Reader’s Digest, GQ, the Los Angeles Times, the New York Times, Dow Jones, the Grammy Awards, Warner Brothers and Netscape, among others and has exhibited his work in the U.S. and abroad. In a twist on the commercial illustration world, Scott has become intrigued by making work for which an audience has yet to be determined, reveling in the sheer joy of creating at will.

An engaging conversationalist with an avid curiosity about a myriad of topics, communication is vitally important to Laumann, who loves to collaborate with artists in other disciplines, such as dance and music. This includes his wife Alicia, a dancer and choreographer, with whom he has collaborated; he has filmed her dancing in a series of Vimeos, most notably in the elegiac Five Frontier Poems.

It’s the lack of control that excites him about the process of making three-dimensional, site-specific, “immediate” work. Within a few weeks of my visit to interview Scott for a feature in CA’s Design Annual 55, the piles of sinuous branches and surprisingly delicate tumbleweeds outside his studio had transformed an art gallery into a dialectic between nature and defined space, becoming part of The Little Country, an exhibition in the Historic Carnegie Building based on Charles de Lint’s urban fantasy novel of the same name. “Instead of utilizing a literal visual interpretation of the novel, cues were taken from my local surroundings and themes were transposed from the novel onto the materials present,” Laumann explains. “The Russian Thistle, or tumbleweed, plays a metaphorically prominent role in the installation as a ubiquitous symbol of the local landscape. Interesting parallels can be found in its cycle of life-death-life with themes from the novel.

At the time Scott, his wife and their eight-year-old daughter Paloma, were happily settled in Ft. Collins, CO, having moved from San Francisco, CA. Over the previous decade he has called such disparate locales as Spain, Germany, Philadelphia, Minnesota, and two locations in Southern California “home”.

Recently Alicia took a 9-month assignment as a visiting professor at Colorado Mesa University so they are now living in Fruita, CO (near Grand Junction) until May. They expect to return to Fort Collins this summer. The town seems like a good fit for an artist who needs breathing space. I’m sure its college-town feel, microbreweries, restaurants, and charming Old Town don’t hurt its appeal. 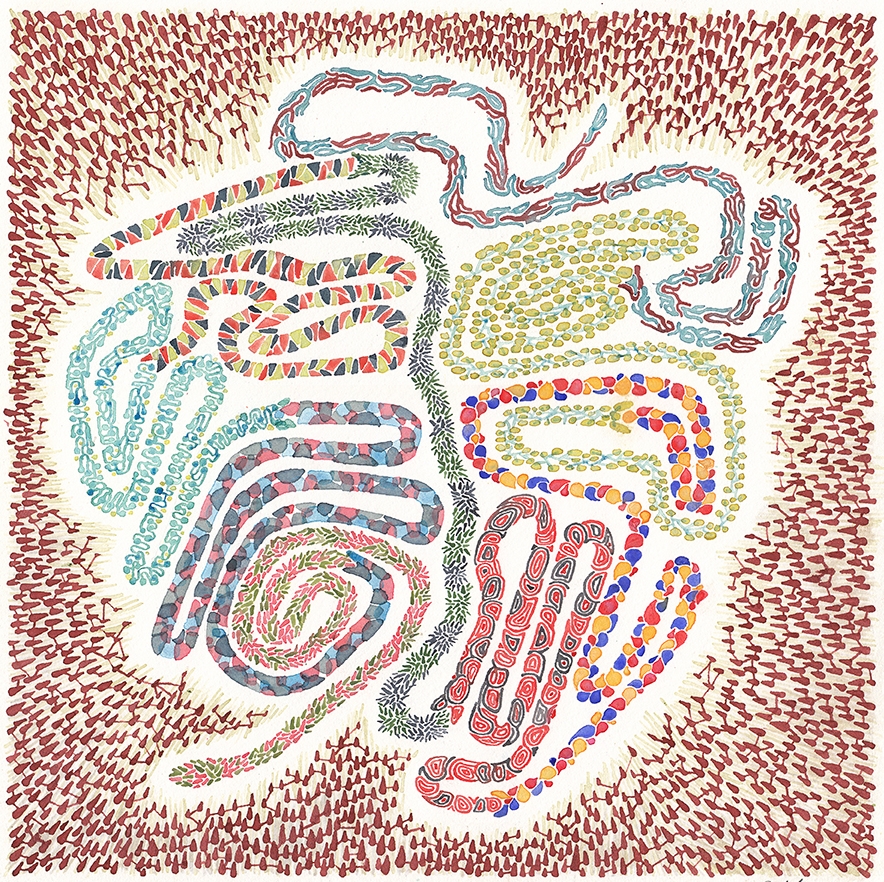 What motivated you to begin drawing and making art? Were you one of those children who could always be found sketching?
Scott: I remember drawing when I was younger, but I was never one of those kids who doodled incessantly. Instead, I felt the need to graphically interpret everything I was interested in. I would create these elaborate drawn worlds on poster board of space stations and galactic battles. I’d design entire uniforms for a fictional football league. I remember that documentation was very important to me; anything visual had to correspond to words, stats and written text.

Who or what were your influences?
Scott: Early on, I remember spending time at my grandparents’ house and being struck by the amount of art they had on display. They were pretty hip. They had a strong modernist sense of style – it was the first time I’d seen anything other than family photos on a wall. They collected original work from local artists. There were bold colors and shapes throughout their home. I distinctly remember being fascinated with a large Clyfford Still knockoff painting they had hanging above their Mid-Century sofa. The effect that composition had on me led me to explore artists who have a strong sense of color, shape and composition: Nicolas de Stael, Richard Diebenkorn. I also admire the work of contemporary multidisciplinary artists like Gabriel Orozco and Kiki Smith.

How did you develop your color palette?
Scott: I think color is probably the single most exciting aspect of art to me. It’s also one of the most challenging aspects. It took me a lot of experimenting to feel comfortable with color, where I felt like it was a strength rather than a weakness. Now it drives most of my work. An artist who I can’t recall once told me that the key to a strong palette was to use only three colors to mix paint from. I don’t consciously think about that anymore, but I remember it being very helpful initially to bring some cohesiveness and confidence to my color sense.

When you click on “Selected Projects” on your website, the page is filled with a variety of projects in different media. What would you say unifies your body of work?
Scott: Maybe color! In every project, I think about shape and negative space and the effect it will have upon the viewer to illicit an emotional response. I’m always trying to reveal meaning beyond the surface in each work, whether it be a portrait, ink block print or drawing.

How did you develop your ink block style?
Scott: About 12 years ago, my wife and I were able to live in Andalucía, Spain. At the time, I was doing conceptual illustration almost exclusively. I felt like I had almost too much control in the work I was making; I wanted to be surprised again through my process. I became obsessed with the unfiltered light, rich colors and Spanish architecture and started making rudimentary ink block prints in response. I loved that I didn’t know what to expect when the color transferred to the paper. Made me feel like a kid again. I liked it so much I made more images with different subject matter. To my surprise, it was well received and I started receiving commissions for it.

What is your preferred medium?
Scott: Whatever communicates an idea best. The idea really drives the medium. I fought the crossover approach for a while, but realized that my interests are much too varied to be confined to one approach. Lately, I’ve discovered a real love of detailed drawing and combining multiple mediums under one unified theme. 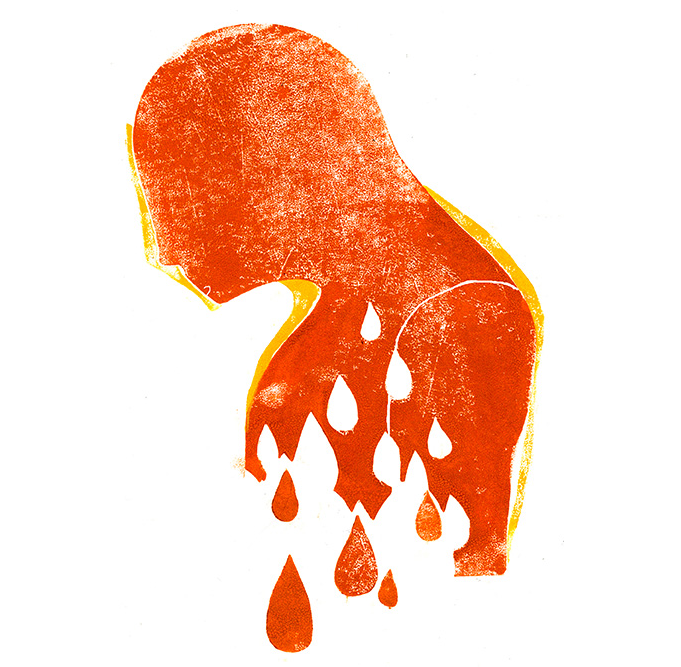 What is your sketchbook process?
Scott: It’s eclectic. I take photos of things my eye is drawn to, I’ll scribble down stream of consciousness thoughts, gather natural elements, clip quotes from books. I’ve never been able to maintain a dedicated traditional sketchbook. I’d rather pin all these observations up in my studio and see what ideas develop out of their interaction.

What is your favorite type of assignment?
Scott: I may have answered this question differently several years ago. I view an assignment as more collaboration now. I love to collaborate because it allows me to consider a viewpoint that I may not have arrived at on my own. It can open up a whole new direction for a given work. The best kind of collaboration is where the mutual exchange leads to work that is fresh and contains an element of surprise. The best assignments have this type of collaboration.

What is your process for an editorial illustration?
Scott: I need to let the story or article settle over me for a while. This is probably one of the most enjoyable aspects of editorial illustration. I’m often intrigued by what is written or awakened to a new perspective. It gets my mind moving in a different direction. I typically sketch out a lot of visual ideas. Usually, there is some struggle in editing them down. When this happens, I remember something that I find distinguishes the best editorial work: illustrating the problem is often better than illustrating the solution. I send along the best sketches to the AD and include notes to clarify the concept.

What inspires you?
Scott: My immediate environment: my wife and daughter, colors and patterns, a casual discussion. Remaining present to everything around me provides enough inspiration each day. 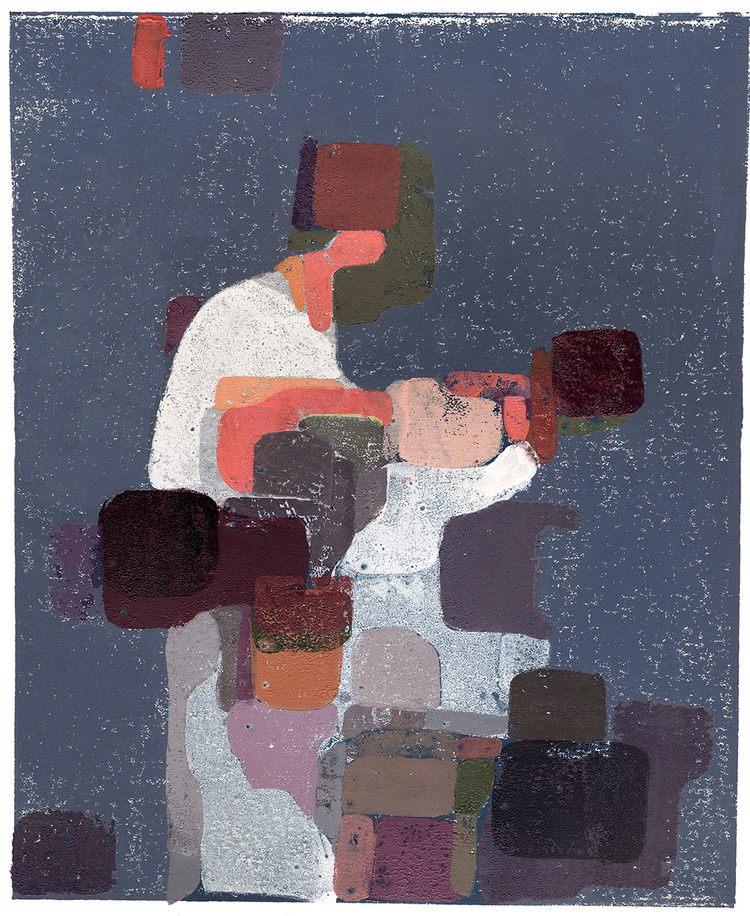 You’ve lived and worked in so many places, what do you take away from each place when you leave for the next?
Scott: Each place we have lived has played a role in where I am now creatively, even if I don’t realize it. Over the past three years, in three different locations, I’ve really made a conscious decision to let the local landscape influence my work. I’ve found that themes from one place will carry over to the next and may find some completion there. The funny thing is, I feel that all of these moves have made me aware of the importance of setting down some roots in one place.

Can you describe your studio environment?
Scott: I’ve been able to work in a renovated barn on a three-acre property with a view of the Rocky Mountains. Three years ago, I would have desired a studio space in the city. But living in Germany on the edge of the Black Forest made me aware of how important open space is to my creative process. Since I’m working in multiple disciplines, I need a lot of space to spread things out. And I love the fact that I can step outside, breathe fresh air and listen to the wind in the trees.