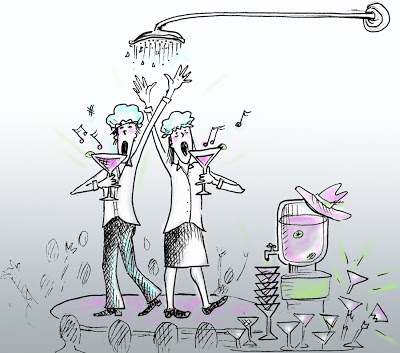 Everything is bigger in Texas. How much bigger? When I made cosmos for my sister Laura’s 8th annual karaoke party earlier this month, instead of using a shot glass I used a measuring cup.

Traditionally, Laura only serves beer, wine or soda at these events, but last year she served a pitcher of margaritas to go with the chili that was on menu. I was the bartender and wound up making two or three small pitchers of them, at most. But Laura still liked the idea of a signature cocktail for this year. Because cosmos are alliteratively compatible with karaoke, in addition to being delicious, was the cocktail of choice.

I made up a big batch starting with six cups of vodka. (Even though Laura, like I, prefers gin, we agreed that many people do not, so we went with the traditional recipe.) When I was done, the decanter was too full to add any ice too and would have been to heavy to shake even if I could have, so we stuck it in a giant tub of ice.

That decanter held about 32 drinks, and there were about 32 people coming. Everyone would have one, or some people would have none and others would have two. Either way, we figured we’d have plenty.

What we did not figure on was the need to send someone out for more ingredients.

The cosmos were more popular than Laura’s rendition of “Everything’s Coming Up Roses,” and that is saying something. Except for the guy who returned his for being not cold enough (which, frankly it wasn’t right then — he got the first one poured), people loved them.

Was it the cosmos or just coincidence that long-established permanent audience members (that is, enthusiastic boosters who never sang) found themselves onstage, microphone in hand, for the very first time? One of those people says she was just holding the microphone and mouthing the words, but it was still something the crowd never thought they’d see.

As great as my trip to Dallas was, there were two cosmo-related low points. The first came when I realized that during the post-party cleanup a quart of cosmos got poured down the sink. (Yes, I do remember dumping half a pitcher of margaritas last year, but this was totally different because those were margaritas and these were COSMOS, two of which I intended to drink when I got back to Laura’s — I was driving and so not drinking during the party.)

The second incident came the night after the party when a group of us went to my favorite barbecue restaurant, Smoke, for the second time in three days. Since I wasn’t driving, I ordered a “Real Deal” Cranberry Cosmo: vodka, Cointreau, fresh lime, cranberry juice and grenadine; I replaced the vodka with gin. Served in a large Tom Collin’s glass, it didn’t look anything like a cosmo, or taste like one either. I didn’t even bother to drink it.

So actually, I didn’t even really get to have a Texas-style cosmo. What would that be, anyway? Maybe it should involve jalapenos? I made a roasted cranberries with jalapenos dish last Thanksgiving that reminded me a little of cosmos. Hmmm. Maybe next year.