Earlier this year I did a cover and interior spot for one of Scholastic’s news publication. If you remember from elementary school, they are the little folded educational paper flyers that came about every two months or so with all sorts of interesting classroom articles and games. I have done a few things for them in the past including one on Ben Franklin and they are always fun projects.

This one featured the Declaration of Independence and they wanted a portrait of King George III reacting to news that the colonies had broken free. One of the biggest problems with historical recreations is that there aren’t any photos. I had to rely on old paintings to come up with somewhat of a likeness.

When my first two takes on what the cover would look didn’t quite fit the editors’ vision, it was finally decided that they really wanted me to riff a political cartoon from the era.

I was asked to pretty much mimic the expression and exaggeration from the original cartoon, but obviously handle it in my own style and this is what we ended up with. Digital technology made it possible for me to take a photo of one of the original prints of the Declaration and warp it to fit my illustration. I’m pretty pleased with how it turned out and so was the client. Thanks to Sandy Mayer at Scholastic for running interference when needed and giving encouragement at that moment of hair pulling. Always nice to work with a great art director. 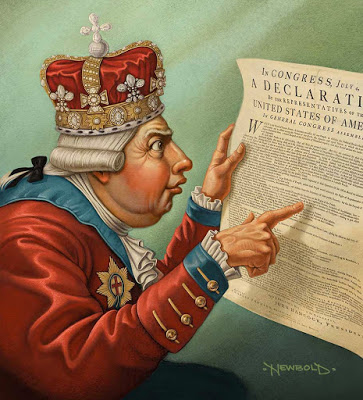 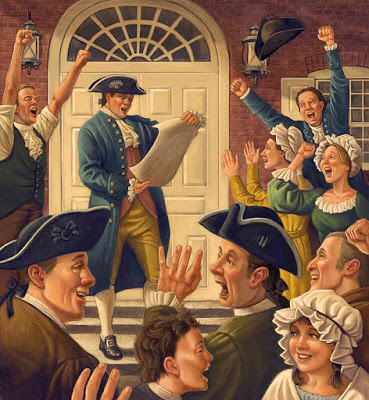 There was also an interior spot of colonists celebrating the news which actually took more time and work than the cover, but oh well. that’s how assignments go sometimes and often you don’t realize what you have bitten off until you start chewing. All in all, I am happy how it turned out as well.