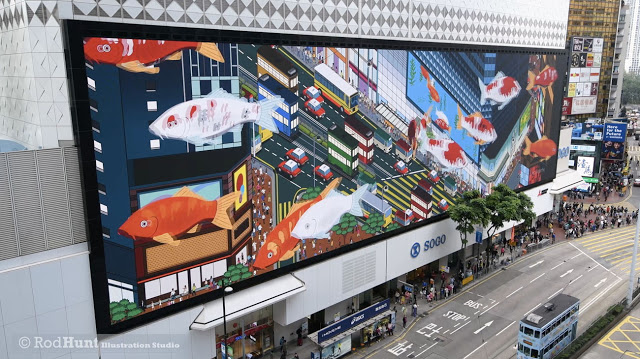 Rod Hunt was commissioned by the Sogo department store in Causeway Bay, Hong Kong to create an animated Bumper for CVISION, Asia Pacific’s largest high-resolution, LED wall. At over 72W x 19H meters in size, the media platform towers over one of the busiest, pedestrian intersections in the world. Sogo wanted the bumper to be a welcomed break from commercially-driven content and to draw inspiration from MTV and Adult Swim, the channels are known for their creative and expectation-defying bumpers. Rod was given granted artistic autonomy and thematic freedom to create an animation that showcased his creative vision and personality. Rod collaborated with animation company Bewilder.tv to bring his vision to life.

With his bumper he wanted to show that Hong Kong is not just a city with tall buildings but also has a strong connection with nature – three-quarters of the land in Hong Kong is countryside.

The story starts from the top of the mountain at Jardine’s Lookout viewing the ground from the sky, then flying over the Hong Kong Stadium and Victoria Park, finally drawing into Sogo’s CVISION and an abundance of swimming Koi fish.
The inclusion of the Koi was inspired by Rod’s visit to the Nan Lian Garden and it’s Koi pond. Koi have a great and positive symbolism in Chinese culture, representing abundance and wealth in Feng Shui. The Koi swimming out from CVISION can be seen as a blessing to bring good fortune to the surrounding area.
See the full project here
By Rod Hunt|February 19th, 2019|Syndicated Content|