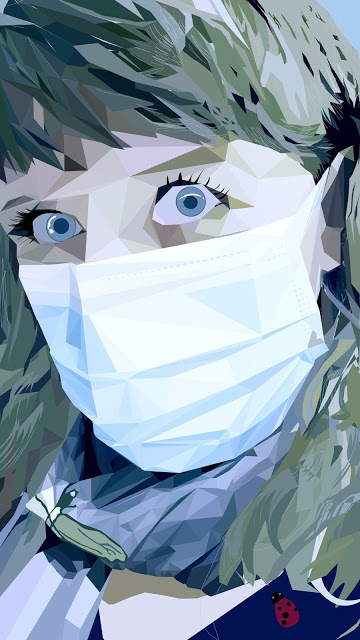 It’s been a long time since I have attempted a portrait in such detail, the last I think was my cousin, Alex a few years ago. The photo of Laura that I have used for this came from our recent visit to a hospital over Chinese New Year in HK, and at that time, the Coronavirus was beginning to spread. We were days away from being told that schools would be shut and at that time didn’t quite realise the concerns of it. It’s funny to think that was only 3 weeks ago and now, walking out into the street where masks are on almost everyone you pass, is a completely normal sight. These faces constantly half covered, who go about their daily life, can’t help but come across as a bit of an apocalyptic scene where we are trying to protect ourselves from this invisible threat. It’s most definitely a strange time in HK, where toilet paper is in high demand. Today a news story has reported armed robbers holding a delivery man at knife point for his toilet roll delivery in Mong Kok. Laura’s portrait isn’t my first response to the masks and the coronavirus and I doubt it would be my last, as outside influences can’t help but be an influence. Anyway back to the portrait, as mentioned previously it has been a long time since my last attempt at a portrait. This has come about from my desire to expand on my techniques and processes that I use, so from this I have been looking at the tutorials on Digital Arts. I had tried Breno Bitencourt’s low poly portrait tutorial and had some relative success with it, but it was from doing this that I ended up taking influence and techniques into this finished portrait of Laura. Here I combined some aspects of Bitencourt’s tutorial, but where he has used a combination of photoshop and illustrator I decided this time to just focus on using illustrator. The reason being was that I felt I could make the initial triangular mesh straight in illustrator rather than importing it from photoshop. I did however take on his idea of manipulating the colours of a photo and having that for my eyedropper tool to select from. I went for a deliberately cool colour pallet for this portrait, which gives it an almost sterile hospital feel. What I really liked about this portrait is that it has captured some distinctive features of my wife Laura, such as her striking eyes which are beautifully framed by her lashes, her clothes too also make for some great images to add which only helps to portray her very quirky personality. When compared to Bitencourt’s example there are some marked differences, This is mostly where I have added the pen tool to add detail into areas such as the hair. I also felt that a low poly effect didn’t quite work for Laura’s eyes so I added them in with the pen tool, which I feel goes back to my style of clear forms and colour that can be seen in much of my object drawings and character designs. Could portraits be something that I would like to investigate some more? Possibly.