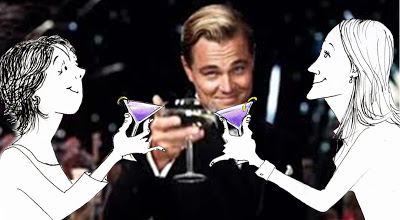 My father was an airline pilot, and back in the ‘60s, one of his uncles used to refer to him as “my nephew, the aviator.” Being an airline pilot was a prestigious job held by men (exclusively) who were treated like celebrities (I witnessed it many times), but they weren’t usually called aviators, except by Uncle Max. Aviators were of a different time and place, with a different allure. Yes, there was romance to commercial air travel (something it’s hard to remember as you’re standing barefoot on line hoping your underwire bra won’t set off the metal detector and wondering if you’ll walk away without your retrieving your laptop, again), but it was in a cool, mid-century Mad Men kind of way. Absent was the derring-do of early pioneers like Charles Lindbergh and Howard Hughes, who really were celebrities. In other words, more Leonardo DiCaprio in The Aviator than Leonard DiCaprio in Catch Me If You Can.

And it’s those early days of flight that the name “Aviator” conjures up. Like the Cosmopolitan, the Manhattan, the Martini and the Singapore Sling, it brings to mind women in bias-cut gowns and men in dapper suits sipping out of cocktail glasses in soigne Art Deco speakeasies. In other words, Leonardo DiCaprio in The Great Gatsby, not Leonardo Di Caprio in What’s Eating Gilbert Grape.

In everything I’ve read about it, the Aviator, created by the head bartender at the Hotel Wallick in New York in 1911, is called one of the all-time classic cocktails. That’s surprising to me, since no one I’ve mentioned it to has heard of it except my daughter Clementine, who saw it on the menu in a Brooklyn cocktail lounge. She and I were at the Flatiron Lounge last week, and it looked like the kind of place that would serve Aviators – landmark building, vintage Art Deco interior, historic mahogany bar, cobalt mirror from the 1920s. Our order was received without a bat of the eye. When our drinks arrived, they were a beautiful shade of purple. Purple!

As it turns out, the original Aviator (or Aviation, as it is also called; more on that next time) included a splash of crème de violette, a liqueur that disappeared from the Savoy Cocktail Book’s recipe for the drink in the 1930s, and then disappeared from US liquor stores in the 1960s until 2007, when it was imported again. I found a bottle at Flatiron Wine & Spirits, a store halfway between where I work and the Flatiron Lounge. Barbara and I will be experimenting with our own recipe tonight. Check back for details.