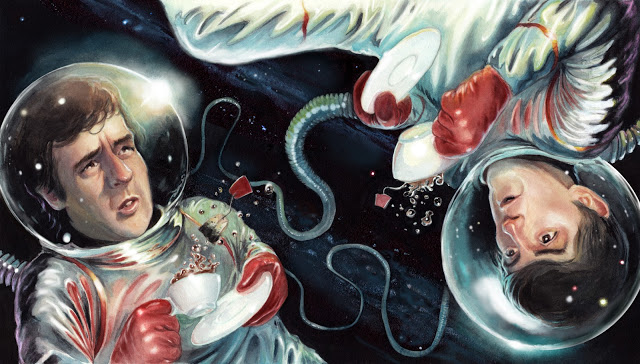 Illustration superhero and pal, Irene Gallo, asked me to whip something up for this short story by Andy Duncan about the comedy duo Dudley Moore and Peter Cook.  I have to admit that I was shamefully ignorant of their existence before this assignment. My mom thought Dudley Moore was the cat’s pajamas and I vaguely recalled he and Kirk Cameron trading bodies some some awesome 80’s movie. But, Peter Cook was completely new to me.
After watching Bedazzled (oh that movie with Brendan Frasier? …no ), I found I’d missed out on a plethora of awesome. And discovered just how hot Raquel Welch was in her prime. The movie on Netflix, I highly suggest you get there.
Duncan’s story made a lot more sense after getting familiar with the source material, obviously. Being very British, the plot was mainly the two characters chatting over tea, in a ship, in spaaaace.

Many bad likeness sketches later, I had a couple arrangements I was happy with. I dug the idea of them orbiting each other, or in a very sterile overly lit clean room with space portholes. And the more I could hint at the 60’s/70’s idea of the future! the better. Irene loved the first sketch since they were drinking tea while wearing helmets, something that didn’t actually occur to me while drawing it. 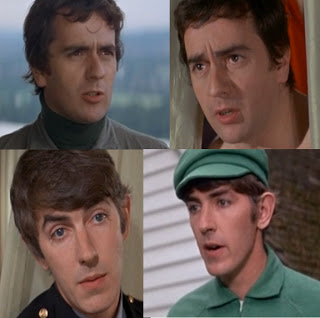 Netflix helped me out again with easy reference screen grabs. And a some quick searches led me to the supremely campy jumpsuits from Lost in Space. 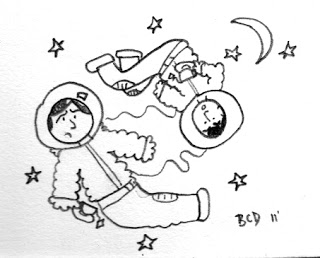 And just to prove my job is easy, my fiance, Bonnie jammed this out in under an hour. She made a solid point.

About the Author: Scott Brundage