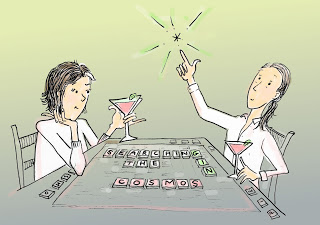 Happy New Year. I’ve already broken one resolution, which was to write at least once a week. Perhaps we’ll post twice this week to make up for it.

Readers of this blog are familiar with these two facts:

1. Barbara and I are gin snobs. That is, we think gin is the superior spirit, and we turn our noses up at martinis made any other way. Not that we drink martinis; we’re just against the vodka revisionism on principle. What principle, we don’t really know. But we very firmly stand by it. Except when…
2. …we clearly violate it every time we make a drink that calls for vodka and, without compunction, we swap out the vodka for gin. Then we celebrate our hypocrisy on a blog!

Barbara’s solution: rename the drink. Stop calling it “a cosmo made with gin” and call it something else, as if it were a different drink, which it is.

She off the top of her head came up with a Metropolitan, or Metro for short, which would have been perfect if there weren’t already several drinks by that name; most involve brandy, sweet vermouth, bitters and simple syrup, but I found a few that were cosmo knock-offs – orange vodka, lime juice and cranberry juice, for example. So we couldn’t use that.

Then just as fast she came up with a Gizmo. It’s very clever, but to me it had an electronic tech-y connotation. I also felt the name lacked sophistication. “So do we,” she replied. But at least we can pretend, can’t we?

I suggested the Pierpont, after the Brooklyn family who had the one of the first gin factories in New York City, but that was quickly shot down (not by Barbara; in fact, this may be the first she’s hearing of it) by my husband, who thought it sounded too masculine and self-consciously arcane.

We have not given up. In fact, we’ve made a pledge that 2011 will be the “Year of the [Insert New Name for a Cosmo Made with Gin Here].” Readers, if you have any thoughts on the matter – even if not a name itself, then perhaps a direction we should go in – we would love to hear them.