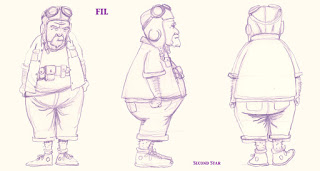 (click to bigefy)
This is a turnaround profile that I whipped up for the character of Fil, otherwise known as The Artist Formally Known As Phil. Ha, and I drew it in purple! How about that?
Fil will be appearing in the 3rd issue of my comic, Second Star, which is currently being penciled. He was once a well respected and well known artist who went off the deep end and disappeared for awhile. When he reappeared he took up refuge in a blimp called the Grey Shark and became a wandering, grumpy, reclusive artist alongside his wife, Bitsy.
Second Star #3 is on it’s way!
By Bruce Gerlach|June 1st, 2020|Syndicated Content|