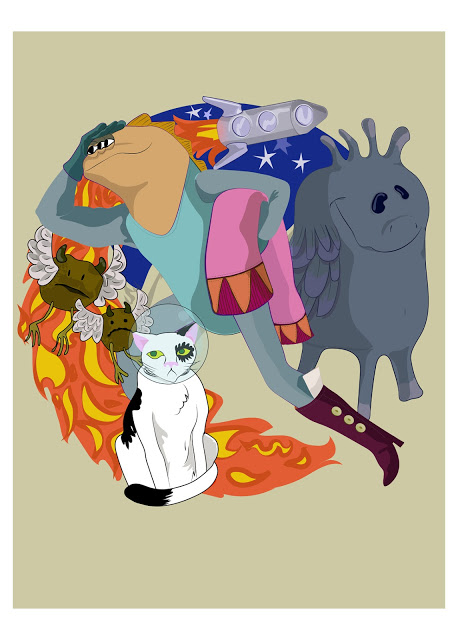 I have returned to what seems to be the ongoing project of mine, Space Cat. This graphic novel of mine is entirely visual and its format of being non verbal has been inspired by Sean Tan’s “The arrival.” One of the most beautiful stories both in content and illustrative style, I aimed to create something that had no need for a written language to communicate a story. I have loved how open to interpretation a visual story book can be and have aimed to emulate this way of working here. Although my own creation is nowhere close to Sean Tan’s work of art, it has opened the door to my understanding of what a children’s story book can be. This image here is a collection of the main characters within my first Space Cat story. Starting with an initial pencil sketch to compose and map out my image, it was then scanned and imported into Adobe Illustrator. Once imported into Illustrator, the sketch became a background template for the work. In another layer, the lines are traced over with the pen tool to create vector lines and shapes. I aimed to create each character onto a different layer so that they can be changed independently from each other if needed, this actually became really useful later in the process as I was able to adjust and move characters and objects around to refine the composition. Once basic characters were completed, colour was added. Although bright, the colours do aim to be muted somewhat to avoid it being too overpowering. Shading was then added as additional layers, using darker colours from the main image and then reducing the opacity to around 50%, so that details from the previous layer still show through.
The composition uses a circular motion to help add some movement to the image and integrates the main characters from the story into it along with the props from their own storyline. Space cat, for example, wears the fish bowl that is used as a space helmet in the first couple of pages and the walking fish holds the carpet he takes from his apartment before he sets off on his travels; the map that he uses to navigate the desert can also be seen poking out of his boot.
Extracts from space cat can be seen on my web page, as well as purchased in full, from Amazon. What I really liked about space cat is that it is a project that I have been able to return to over and over again, adding characters and pages to, and exploring the idea and its possibilities without ever having to resolve with an ending.
By admintamra|April 8th, 2020|Syndicated Content|