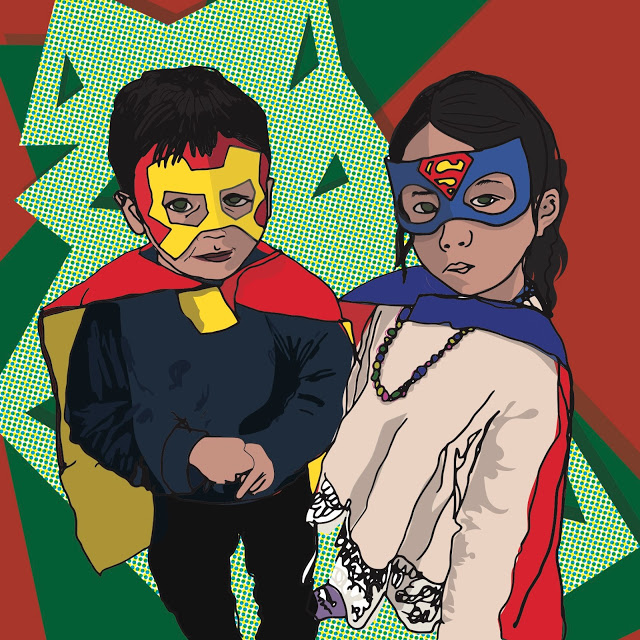 #superheros#birthday#kids#comics#heros#colour#children’sillustration.
It’s my niece’s birthday today and I wanted to send her something a little special, so I decided to create this picture for her. I love this photo of her and her younger brother, Conor. It was taken in the front room of their home, and they are rocking their superhero costumes. The colours in this are great, so bright and vivid with loads going on in the background to do with the children. The remote control car, the toy boxes and and other bits and bobs give us a hint into their past games.
Just imagine being a child and how many imaginative narratives you would have created with a floor full of different toys and game. Then, throw in the added aspect of you and your sibling suddenly becoming superheroes, can the day get any better? Only with ice cream for lunch I guess or being able to go to the shops with your mum still wearing your cape and mask.
While my niece, Caitlin, has fully taken on her new role with all the confidence and heavy responsibility that comes with holding such unique powers, Conor seems a bit unsure of what his superpower is. On one hand he has been practicing spidey hands all day long, shooting webs at anything that walks, but now he has donned an Iron Man mask …and a cape? Everyone surely knows that Iron man doesn’t need a cape to fly, so why does he have to wear it? You know what Conor, it doesn’t matter, be your own superhero.
Creating this work that was a completely digital experience ( I say this as usually I will hand draw and then scan it into my computer to manipulate digitally later). The process started off with a sketch of the photo in photoshop. I find it easier to sketch in photoshop as the pencil option seem to be much wider. This was then imported into Adobe illustrator and then the image trace function was used to create a vector line. Colour was then added suing the live paint bucket tool and details, such as shadow was added on top to complete it.
By admintamra|April 8th, 2020|Syndicated Content|