The (Cosmo) Girls with Kaleidoscope Eyes 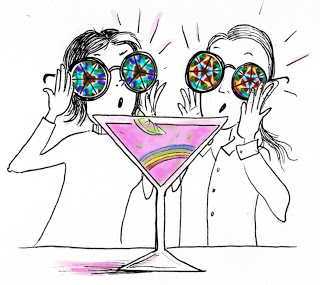 Among a cosmopolitan’s many appeals is its rosy hue; what other color would such a girly drink be? The ones Barbara and I have been enjoying lately are not the traditional blush-tinted ones; because of the industrial strength Trader Joe’s cranberry juice, they’re more of a vibrant fuchsia. Still in the pink family, though. Still lovely.

During this holiday season, we had occasion to explore a whole new color palette, with surprising results. First, I was gifted with a bottle of blue gin. Magellan, it’s called; “Precious Distillation, Imported from France.” When I showed Barbara, we both thought it was the bottle that was blue, the way Bombay Sapphire is, but then we poured out a shot and found that the actual gin is blue, from iris flowers, which was exciting because pink + blue would equal purple, and we thought that would be kind of fun.

But no, the resulting cosmo looked exactly the same as one made with normal gin.

Then on Barbara’s Hanukkah-themed Christmas Eve, she had grape juice along with pot roast, latkes and kugel, and mixed up a batch with the deep purple juice instead of cranberry juice. Once again, the resulting drink looked exactly the same as the regular ones.

We may have to add color theory to our list of experiments, because I want to see what a cosmo made with white cranberry juice and blue gin would look like. Although I think I already know: despite not having one pink ingredient, it will look pink because apparently drinking cosmos makes one view the world through rose-colored cocktail glasses. Or something like that.

Happy Holidays from Searching the Cosmos.