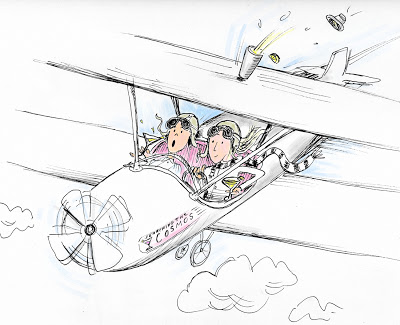 It started on Barbara’s birthday back in May when her friend Dave gave her the fixings for a cocktail neither she nor I had heard of: the Aviator. Under his guidance, Barbara made a batch, we tried it, it was fine, and then she and I went back to our Junos. For those who don’t remember what a Juno is: http://searchingcosmos.blogspot.com/2011/07/name-that-cocktail.html

On my birthday a week later, Barbara and I split an Aviator during a weekday lunch. Without the Juno distraction we gave it more consideration, and we really liked it. A tart, sharp taste, different from a Juno, but with the similar bite. A nice change of pace.

We each had our own a few days later, and walking back from Barbara’s I thought that maybe we had found our next drink for if not forever than at least the summer. I wasn’t sure, though.

That night, I logged on to Netflix and saw one of the “Top 10 for Mary” picks was The Great Waldo Pepper, a movie about a post-WWI biplane pilot—or aviator, if you will. (I first saw it on a plane, an odd choice for in-flight entertainment since it includes not one but multiple plane crashes.)

I laughed at the coincidence. I decided to not watch a movie but to read a book I had just picked up from the library, TransAtlantic, by Colum McCann. I didn’t know what it was about and had only chosen it because I liked the author’s previous book, Let the Great World Spin. I settled in and looked at the jacket copy: “Two aviators set course in a modified bomber for Ireland… . “ Ha!

I read for a bit and then turned on the TV. What came on? The movie Airport, on a channel I’m sure I didn’t even know we had. And that—seeing Dean Martin, the Rat Packer who was known for always having a drink in his hand, as an airline pilot—clinched it. The cosmos was trying to tell me something.

We’ll have more about this classic cocktail in the coming weeks. But for now, welcome to the summer of the Aviator. Happy Solstice.

The Aviator (also called the Aviation)