Now that it’s officially spring, we can’t help but feel optimistic about the warmer and sunnier coming months. And our selections for March’s Featured Five only adds to the positive vibes here at the Directory of Illustration! These five incredible artists excel in creating expressive and unique illustrations for advertising, editorial work and more.

Click on the images below to explore each artist’s portfolio!

Caroline Riley is a 25 year-old illustrator who specializes in youth media and comics. Her brightly-colored artwork is filled with emotion and makes us consider the “abnormal among the normal,” as Caroline puts it.  She also works on a webcomic that updates once a week called “A Mirror’s Tale” (read our blog post about her ongoing project). 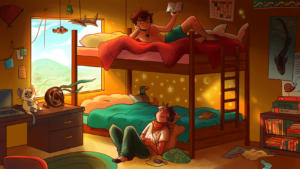 Emily Lopuch is a designer and illustrator who specializes in colorful, whimsical illustrations, hand lettering and simple vector designs. She was the lead product designer for the jewelry brand Alex and Ani; nowadays, she designs pins, patches, jewelry and other merchandise for Wildflower and Co., while also running her own charity-focused pin shop, Riddle and Jinx.

An award-winning artist who grew up in south London, Stephen Collins works in paint and ink to create witty, traditional illustrations for clients from Deutsche Bank to Wired Magazine. He has been awarded the Jonathan Cape Graphic Short Story Prize and The Society for News Design Award of Excellence, and is a popular contributor to Guardian Weekend.

For over 20 years, award-winning Alan Pollack has been captivating science fiction, fantasy and horror audiences with his creative, imaginative art. His figurative, conceptual creations are perfectly suited for advertising agencies, leading entertainment, book and game publishers and more. His art has also appeared on the cover of Spectrum Fantastic Art, a sci-fi-themed illustration annual.

Initially working as a designer for a retail design consultancy, Chellie Carroll has now chosen to focus on her career as an illustrator. Her whimsical, decorative illustrations mainly involve detailed computer-based vector line work, though she has recently begun to experiment with mixed media painting and drawing.