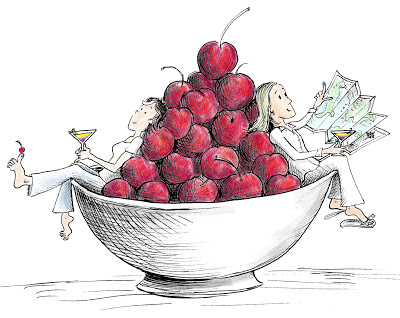 The last post inspired me to buy the audible.com version of The Great Gatsby, read by Jake Gyllenhal. It was excellent, but I was irritated by Jake’s pronunciation of coupe. When talking about Tom Buchanan’s blue car (not to be confused with Gatsby’s yellow one) Jake says, “coo-PAY.” Since confusion over the cars is a key plot point, the word comes up a lot. As it turns out, Jake’s pronunciation is the way coupe would have been pronounced in the 1920s, although after WWII it changed gradually to the one used in the Beach Boys’ “Little Deuce Coupe,” so I guess it’s acceptable. (Totally unacceptable was his pronunciation of claret. He rhymed it with his pronunciation of coupe, and that was not right in any time or place.)

Which brings us to maraschino liqueur, a key aviator ingredient. It’s pronounced mar-ra-SKEEN-o and has as much to do with neon-red maraschino cherries we’re familiar with as neon-orange Cheez Whiz has with a wheel of Brie. The liqueur is produced by Luxardo and according to the company site, it’s one of the few liqueurs produced by distillation. I don’t know what that means, but it’s responsible for being “fine and well amalgamated without any aggressive note.” The Luxardo site is fascinating. The company has been around since 1821, founded in a city on the Dalmatian Coast. To read the “About” section is to get a crash course in geopolitics and Italian-Croatian-Austro-Hungarian history as written by the vanquished. It’s intense and recommended. But back to the cherries: Maraschino liqueur is made from marasca cherries, a small, dark, sour cherry grown in the coastal region of Croatia, northern Italy and that area. When preserved in Maraschino liqueur, marasca cherries were called maraschino cherries. Back in the 1800s, they were a delicacy for royalty and the wealthy. Jump to the turn of the 20th century in the US: After experimenting with different flavors of cherries and flavorings for a home-grown version, American producers land on the sweet, light-colored Queen Anne cherry, bleached and then brined, and over the next decades perfected the preserve solution to its present-day recipe of food coloring and sugar syrups. (Interesting sidebar: A few years ago, Brooklyn beekeepers were alarmed to find their hives filled with red honey, only to learn that the bees had been hitting the sweet effluvium at Dell’s maraschino cherry factory in Red Hook.) Any connection to the original marasca cherry is in name only and even then only as written, not pronounced. Speaking of which, how will we move forward when talking about it? Will we be correct and have people think we are wrong, or will we go with the accepted pronunciation and inwardly cringe, as when we order “bru-shet-ta” while knowing full well the second syllable should have a hard “k”? We will discuss this evening over an Aviator. PS: It’s JILL-en-hall, at least in this country.
By Barbara Kelley|August 9th, 2013|Syndicated Content|