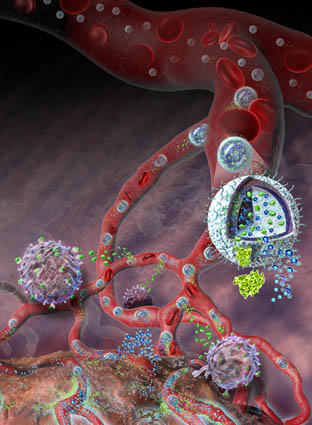 An illustration of a nanolipogel releasing cancer fighting drugs, by Nicolle R. Fuller for NSF.

It’s not everyday that science illustration gets picked up by publications as varied as the The Huffington Post and The Mirror. In this instance a story about a cancer “smart bomb” seems to have sparked some interest.

It’s a funny thing, creating artwork for press releases–you never know where it’ll get picked up. The perfect mix of a good story, a good head-line, good artwork ;-), good timing and a sprinkling of fairy dust… and sometimes it gets picked up by the broader media.

The cancer smart bomb is a nano drug delivery system under development by Dr. Fahmy and colleagues at Yale University. They are developing a new cancer treatment that simultaneously attacks cancer cells and boosts the patient’s immune system. The treatment, which has successfully been tested on mice, uses small hollow spheres, called nanolipogels to deliver the two-prong attack. Some nanolipogels become stuck in leaky tumor blood vessels, where they rally the body’s own immune defenses by releasing interleukin-2 (green). Nanolipogels continuing into the tumor unleash an anti-cancer drug to attack the tumor cells. The original research was published July 15 online in the journal Nature Materials. Check out the press releases from the National Science Foundation and Yale University to learn more.

About the Author: Nicolle Rager Fuller