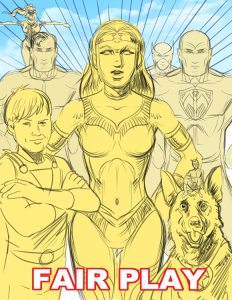 Out of the studio today, and working at the Chimera coffee shop, in what is known as the Brady District in Tulsa, an older part of downtown, north across the tracks.  I used to work in a dirt lab, here in this area, when I was in college and working summers for the Army Corps of Engineers.  ( Yes, I became an engineer and worked in the design department of the Army Corps of Engineers, before I broke into comics with Chelsea Oklahoma’s former wonder boy, John Wooley.   They say he was reading newspapers when he was three years old!   Well, south  18 miles down Highway 66, America’s Main Street, I was drawing comic strips when I was 3 years old.  Mostly about dinosaurs.  We made a good team.  Now the Brady district is thriving with cafes, clubs, coffee shops, The Woody Guthrie Museum , and Driller Stadium, home of Tulsa’s baseball team the Drillers.

Today’s offering…… A comp I just finished for my Workbook Ad.  I promote my studio through a couple of creative books: The Workbook,through my New York agents, The Mendola Agency, and The Directory of Illustration.  Creative books, contain illustrations of commercial artists, and they are sent out by the tens of thousands to art directors, publishers and such all over North America.  If you have two or three grand to spend, you can take out an ad.

I like doing these illustrations.   It’s a chance to be creative, and do an iconic piece.   Here, I am featuring a strong female heroine.   I usually do.   But in this case I’m specifically trying to make her akin to Wonder Woman.  I am predicting that Wonder Woman will be popular next year due to the upcoming “Superman vs. Batman” movie.   Although I didn’t intend to do so….. this comp reminds me of the compositions of Alex Ross, form his Kingdom Come work.   The girl hero floating in the sky is definitely ripped off,  ahem… inspired by Mr. Ross.