Skip to content
Previous Next
One hundred years ago today, Isaac Asimov was born.  (For the record, while he celebrated his birthday on January 2, the actual date is uncertain.)  From the day I read my first Asimov science fiction stories, the Nine Tomorrows collection, the direction of my life changed. 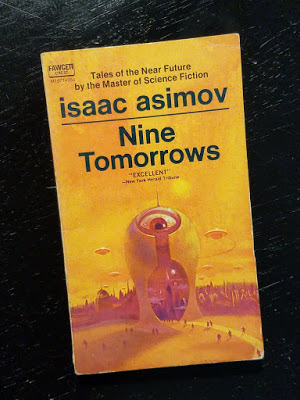 I was impressed not just by his storytelling, his ideas, his intellect, or his profound insights.  I was equally captivated by his good-natured friendliness, his unpretentious humor, so self-deprecatingly sincere he refused to feign modesty.
But his storytelling!  His ideas!  Robopsychology, the Three Laws of Robotics, and psycho-history are only a few of his many inventions, expertly wielded.  (He actually invented the term robotics.)  I couldn’t get enough of his fiction, which led me to his other writing, primarily his science essays, from which I learned some biology, biochemistry, physics, astronomy, and so much more.  In comparison, school was so tedious!  I was already drawing science fiction, but then I tried my hand at writing science fiction (a writer, I am not, turns out), and finally, over the years I managed to hear Asimov speak (in person!) three times, traveling to different states each time.  He was as wonderful a speaker as he was a writer.
Thinking about it now, I suppose his example has a lot to do with me becoming a generalist in my field.  As an illustrator and animator, I’ve depicted a bizarre diversity of things: toys, syringes, spice racks, humidifiers, packaging, cars and trucks, building construction, product defects, fires, industrial accidents, spinal injuries, jewelry, furnaces, train cars, marina development, breast pumps, explosion prevention technology, and even robots.  I like to think that, through me, Asimov even has an influence on my son, who is even now studying robotics in high school – and who has a real talent for robot design.
The world could use more Isaac Asimovs.  I feel privileged to have witnessed the one-and-only!
By Tom Sylvan|January 2nd, 2020|Syndicated Content|

About the Author: Tom Sylvan