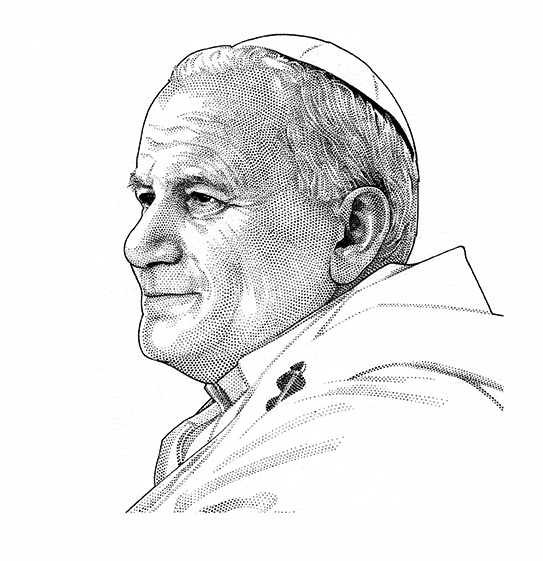 The Pope John Paul II Cultural Center opened in March, 2001, in Washington, DC. Originally conceived as a Catholic think tank and museum, a newly constructed permanent exhibit called The Gift of Love: the Life of Saint John Paul II opened in 2014, and on April 14th of that same year, the day of John Paul II’s canonization by Pope Francis, the building was renamed The Saint John Paul II National Shrine.

Shortly before the grand re-opening, I was commissioned by Gallagher & Associates to create a pen & ink portrait to be used on a variety of the Shrine’s print materials – including their official stationery, note cards, press releases…and I guess it’s quite possible that the drawing is featured on shopping bags in the gift shop too.

I did quite a bit of research to find just the right reference photos to inspire my portrait, and found some beautiful images taken in the mid-Eighties by Dutch photojournalist, Paul Teixeira who was kind enough to assist me in securing the rights.