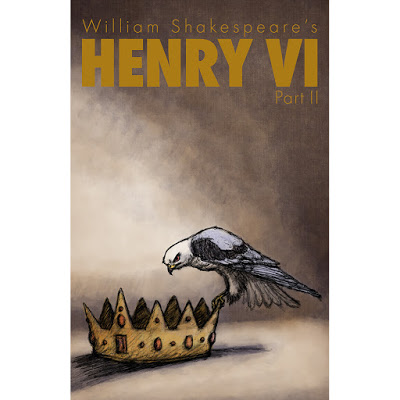 A few years ago, I set a goal to read all of William Shakespeare’s plays and do an illustration for each.
In Henry VI part II act 2 scene 3, after Gloucester is found dead, Suffolk is accused without evidence. The Earl of Warwick gives the following reason:
Who finds the partridge in the puttocks nest
But may imagine how the bird was dead,
although the kite soar with unbloodied beak?
Even so suspicious is this tragedy.
This image of the kite hovering over a nest struck me. It seemed to say so much more than just the murder of Gloucester.   I replaced the puttock’s nest (a bird of prey like a kite) with the crown to emphasize the idea of the impending coup. I chose the black-winged kite because of the blood red eyes gave the illustration a more menacing foreboding appearance.
To date I have read King John through Henry VI part II in order of the sequence of their action. It wasn’t until reading this one that I came up with my first image. I think I will have to go back and review the others again for more ideas.
By Barclay Tucker|January 8th, 2020|Syndicated Content|

About the Author: Barclay Tucker