Peter McDonnell was approached to design and create a powerful series of illustrations for Xicato’s innovative trade show booth after the client saw his work in the Directory of Illustration. His characters were also utilized in the company’s extensive social media campaign and in a printed comic book which was distributed to trade show visitors. Adored by the crowd, Xicato Man was a complete success and the booth received the Best of Show Award at Lightfair International, the world’s largest architectural and commercial lighting show which was held earlier this year at the Javits Center in New York.

The day when he first grabbed a crayon and scrawled it across a piece of paper to express himself, he had, unbeknownst to him, found his calling in life. Soon after his eyes could focus on the comics pages and the TV set, Peter found himself particularly drawn to the colors and design of comic art. He now specializes in classic pop-art comic-book style illustrations, caricatures and storyboards.

Peter’s early influences were George Herriman, Walt Kelly and Mort Drucker. He studied drawing and illustration at the California College of Arts and Crafts in Oakland, CA, and the Academy of Art College in San Francisco. He began free-lancing full time in 1985 and began working with his representative Linda de Moreta in 1988. Shortly after, he began collaborating with a wide variety of ad agencies, design firms and magazines to create finished illustrations and storyboards such as a Nestle campaign for Butterfinger candy bars which re-introduced The Simpsons as confectionery pitchmen. Today, Peter continues to work for a diverse assortment of clients locally, nationally and internationally. His client list includes The A & E Channel, Sports Illustrated for Kids, The Washington Post, Marvel Comics, Microsoft, Neiman Marcus, Rolling Stone, Sega and many others.

We had the pleasure of talking with Pete recently. Here’s what he had to say about his style, the Xicato project, and his dream job.

Peter McDonnell is represented by Linda de Moreta Represents. More of his work can be seen through his Directory of Illustration portfolio and at lindareps.com. 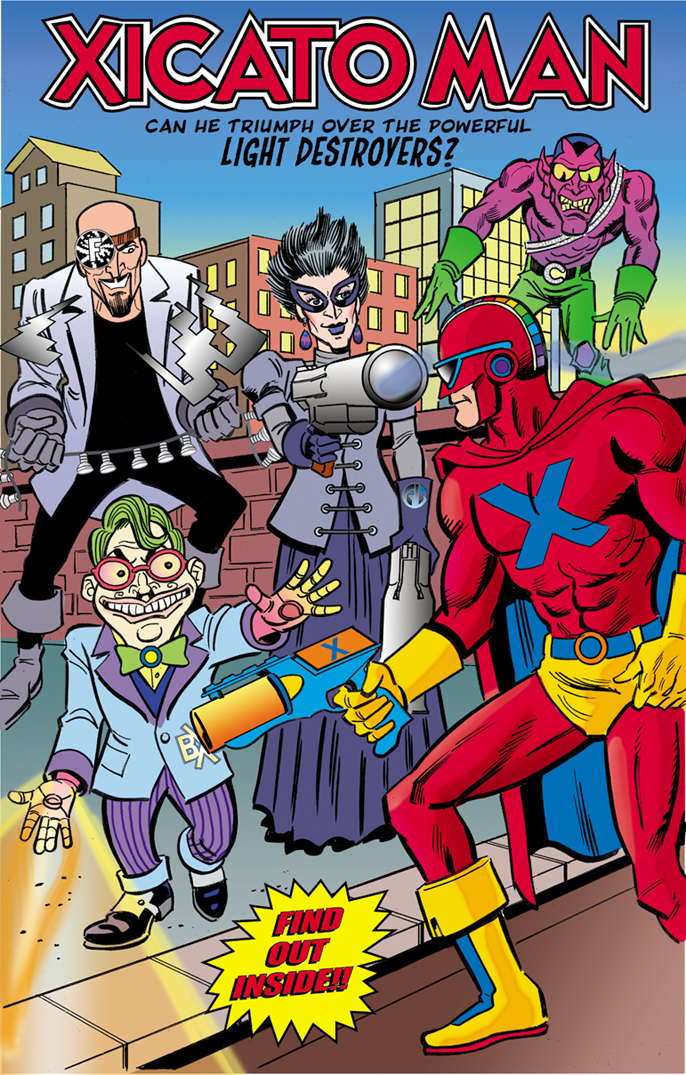 How did you get your start as an illustrator and why did you choose to focus specifically on pop-art and comic-book style art?

I would say I got my start gradually. I was getting work as a caricature artist and cartoonist along with illustration and various storyboard jobs but I wasn’t really focused on the pop-art images until I sent my work around to several Bay Area reps and Linda de Moreta, my agent today, wanted to work with me. We discussed focusing on a style that would be more commercially viable because at the time I was doing mostly cartoon and satirical work. Pop-art became my stylistic statement, rather than having too many different styles. Today, when I do an illustration project for clients, they typically call for something in the classic comics or Roy Lichtenstein type of style.

You recently created a number of panels and artwork for Xicato’s trade show booth which were also used in a social media campaign and distributed as a printed comic book. How did the client find you and why do you think they wanted your specific style for this project?

The client saw my spread in the printed Directory of Illustration. I have a very strong background in character design and character development as well as the ability to create a very classic comic book look. They wanted to hire someone who could create a visual representation of their company as a character in a comic book and my portfolio has enough of that style that they thought I could help them create just the right characters and illustrations to tell their story. 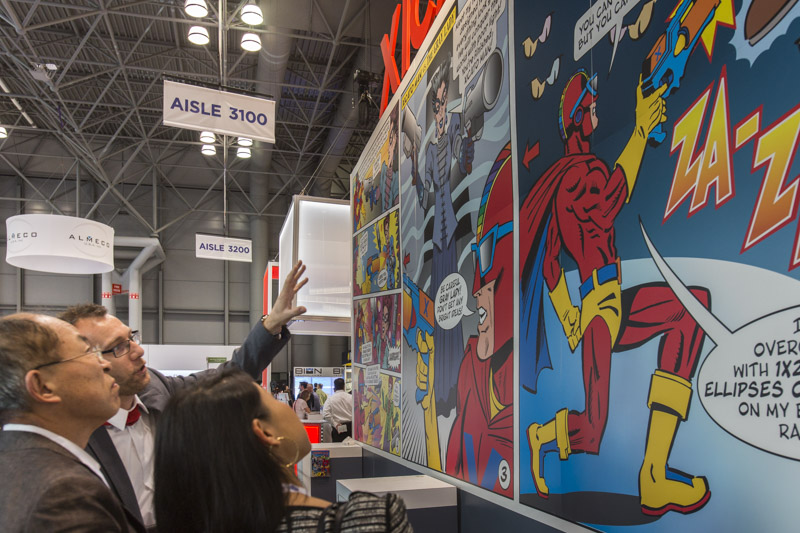 Tell us the concept behind the campaign and what kind of creative direction you were given.

The central idea for the project was to create a comic book based around the company, Xicato. The main character was to represent the company along with “villains” that would portray qualities of lighting that were subpar, to represent their competition. The project started with a set of character ideas that they had developed in-house. I was given general direction on what each character was going to be about, but they needed me to design the look for each one. They had originally wanted the main character, Xicato, to be a secret agent with a trench coat – something along the lines of James Bond – but the idea changed to have him be a superhero based on what I thought would work better with the storyline. For the villains, I came up with characters who had the qualities of bad lighting representing Xicato’s competitors- lights that would spread out too far, lightbulbs that would flicker, etc. Based off my designs they chose which characters worked best. I came up with the scripts that would be used for the panels on the booth. They also wanted their name, Xicato, to be created as a comic book style logo that would be put on the booth and on the comic book cover. The actual booth itself ended up becoming a theater with various displays. They also made two 3-D foam core comic book sound effects for the front display area of the booth. 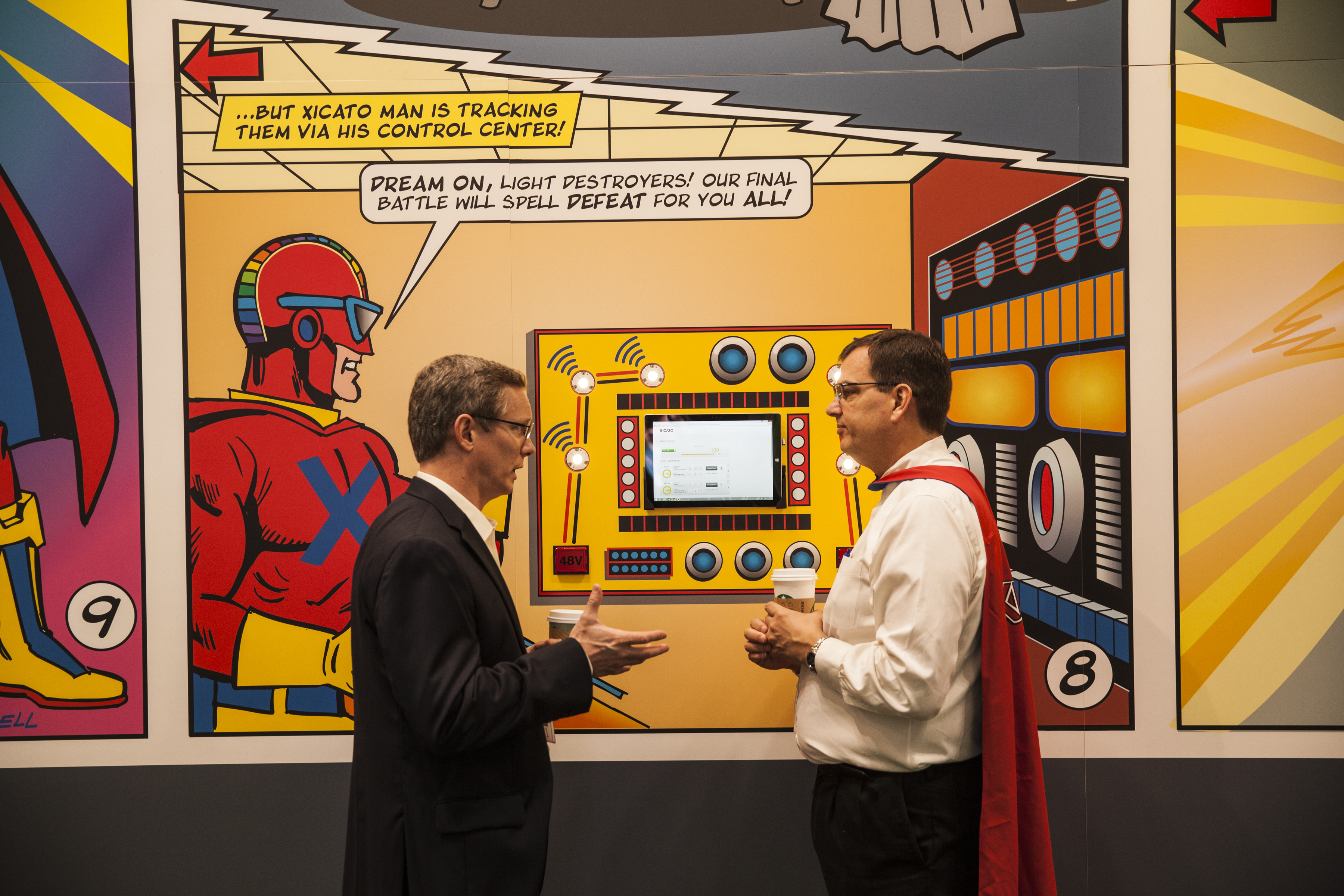 How many illustrations/panels did you end up making overall and how long did the project take to complete?

I created the Xicato logo, 9 panels for the booth, 3 interior illustrations and 2 sound effect comic book images that went on the front of their booth. I also did a cover for the Xicato comic book which was printed out and distributed at the trade show. The work took about 2 months from first sketches to finalizing everything.

Had you created art before on this massive scale before?

Not of this size! When I received the measurements they were about the size of my garage/converted studio. I’ve done billboards in the past, but nothing quite like this.

What were the most challenging aspects of bringing this project to life?

Along with the very tight deadlines, it was very important that every illustration worked with the physical dimensions of the booths. There were two doorways, one in front and one in back. The front of the booth had a marquee that the art had to wrap around. There were also three-dimensional display cases in two of the panels. I worked with architectural renderings as it was important that everything fit really neatly. 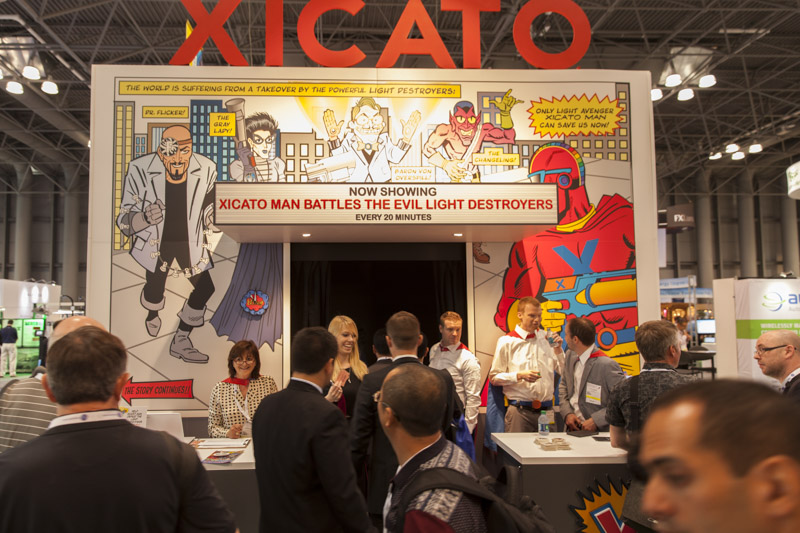 How was your working relationship with the client and what role did your representative, Linda de Moreta, play in the execution of the work?

The client was great, I really enjoyed working with them. They were just a lot of fun to work with and we had a great working relationship. Hats off to Linda for seamlessly managing the project every step of the way. She was closely involved with the entire process and made sure that everyone knew what everybody else needed, deadlines were met, everyone stayed happy, and everything ran smoothly. It couldn’t have been done without her! 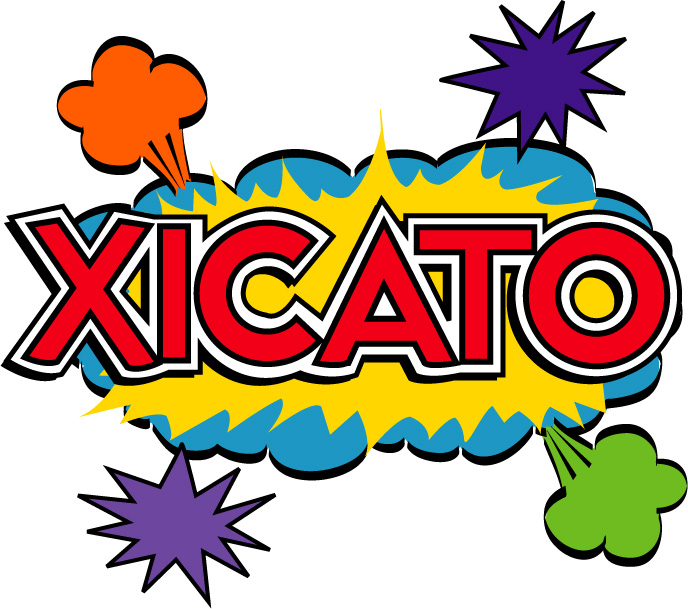 Do you have a dream job?

I would love to create a whole line of superheroes for the NFL, NBA, or MLB, along with a comic book story for each character.

Is there anything else we should know about Peter McDonnell?

I really like the process of getting involved in a creative project with other creative people. I love to help bring projects to life and to provide my imaginative input. I enjoy a collaborative process where you can get involved in making it all cohesive and great.